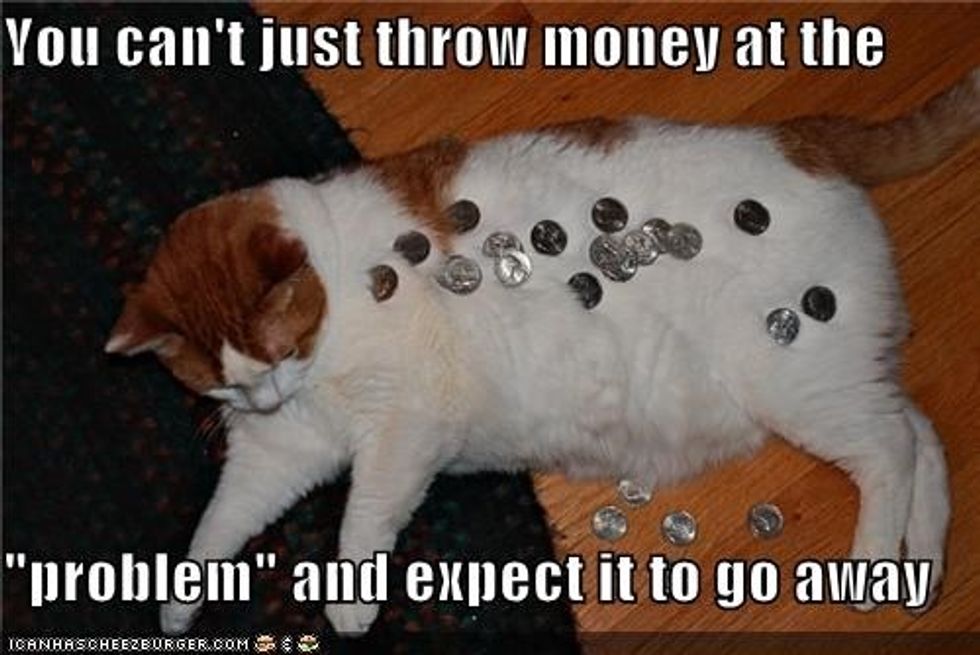 This seems like a useful way to create jobs and keep people safe from crime: the Arizona Legislatureincluded almost $1 million extra in the budget for a for-profit prison company, GEO Group, because lobbyists for the company asked real nicely for it. The Arizona Department of Corrections says the money isn't necessary, but lobbyists convinced House Appropriations Chairman John Kavanagh that GEO Group totally needed the money because it wasn't making enough profits from providing temporary emergency beds for Arizona prisons. How can you call yourself a for-profit company if your government contract doesn't guarantee you a profit, for heaven's sake? Might as well just have socialism if you oppose letting honest corporations make money, after all.

The House Minority Leader, Chad Campbell, is apparently one of these Reds that doesn't want private prisons to turn a profit for pretending to house prisoners that don't exist:

“This is somebody getting a handout ... It’s unnecessary. This came out of nowhere — I mean that. No one said a word about it. It wasn’t in the Senate budget, it didn’t come as a request from DOC. There’s something really shady here.”

No, this is not someone getting a handout -- you don't see anyone buying crab legs with an EBT card here, now do you?

Doug Nick, a spokesman for the Department of Corrections, said that the prison system hadn't asked for additional funding, and "had nothing to do with it." He is just one of those out-of-touch bureaucrats, like those generals who say the Army doesn't "need" more tanks, even though defense contractors definitely need the Army to have more tanks.

So here is Rep. Kavanagh explaining why GEO Group needs more money: You see, the state already guarantees $45 million a year to house inmates in its 2,530 beds. But Kavanagh

called that a “cut rate,” considering the recent recession, and said that “now that the economy has come back,” the company merely “want[s] to get more money.” He also claimed that if GEO Group didn’t take the inmates, the state would have to pay to house them at more expensive — and overcrowded — facilities.

See, he is just trying to save taxpayers money, apart from the pesky details about how the GEO Group is currently operating below capacity, with 2,466 of its 2,530 beds occupied, and then there's the Corrections guy saying they don't need the extra capacity or funding, either. Still, isn't it better to make sure a private prison makes a profit, rather than risk paying more money to house prisoners the state doesn't actually have?

Besides, there's probably going to be a need for more prison cells, since Arizona is so devoted to jailing homeless parents -- see Tbogg's story about Shanesha Taylor the homeless woman in Scottsdale who lost her kids and was arrested for neglect after leaving her children in her car during a job interview -- not something we'd recommend doing, but not too surprising when you're desperate. The state has slashed its child-care budget, so maybe just putting both mom and kids in prison now will just make their eventual fate a little more efficient.