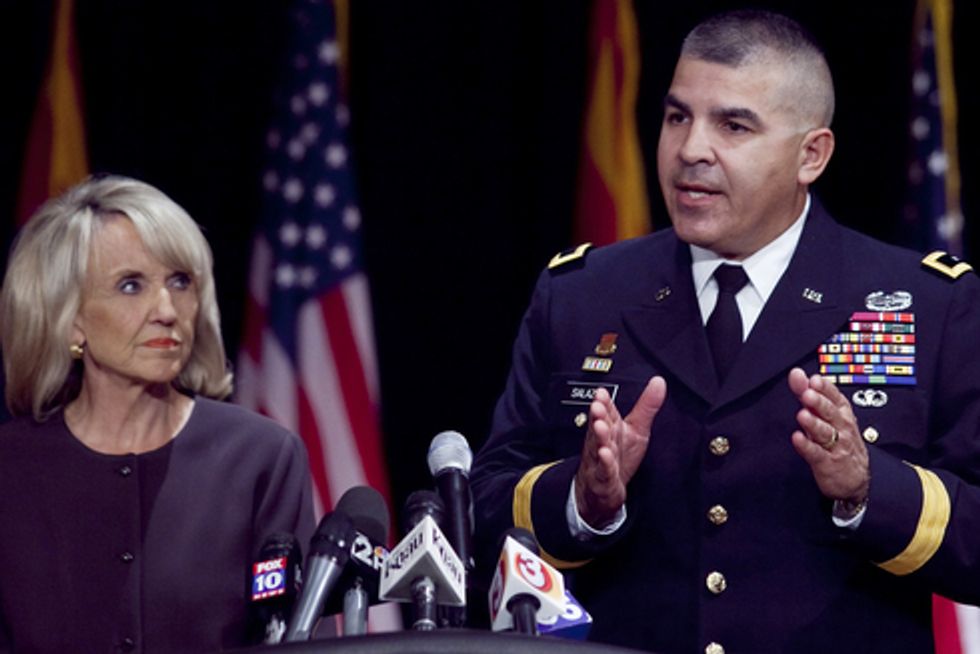 Need a life-affirming bit of sunshine and daisies? Then have we gotthe opposite of that for a story for you! Arizona National Guard recruiters, it seems, have a long, undisciplined history of taking their sometimes-still-underage prospects around town to get a taste of the excitement of military service, by shooting paintballs at homeless people! Also, sex crime, sex crime, blah blah blah. It's cool though. One whole person got busted some ranks and not honorably discharged! So the system works! (That one time. Everybody else just got transferred, like a priest.)

Military investigators were told that [Sgt. First Class Michael] Amerson wore his National Guard uniform and drove a government vehicle marked with recruiting insignia as he and other soldiers — some still minors — shot transients with paintballs or got them to perform humiliating song-and-dance routines in return for money. During some of these so-called “bum hunts,” female recruits said, they were ordered to flash their breasts at transients. Homeless women, conversely, were offered food, money or drinks for showing their breasts.

We bet Michael Amerson was the most successful recruiter in the entire Arizona National Guard.

Don't worry, everyone. The Guard says that these problems have been dealt with! Except for all the people who say that they haven't.

[O]ther high-ranking officers who talked with The Republic disagreed that problems have been dealt with. They said the National Guard suffers from lax discipline, cronyism, cover-ups, whistle-blower abuse and other systemic flaws. To this day, they note, the Guard has never successfully court-martialed an officer or soldier despite serious wrongdoing uncovered by investigators.

Lt. Col. Rob White, who conducted a command climate investigation in 2009 to assess whether commanders were at fault, said he is sickened by the failure of National Guard leaders to root out misconduct and impose punishment.

“The way the Arizona National Guard is today, I would not trust it with my son or daughter,” said White. “It disgusts me ... People don’t get fired, they get moved.”

White, who oversees future operations at the Guard’s Arizona Joint Forces Headquarters, is a soldier of 23 years with a Purple Heart and a Bronze Star. He and others said attempts at reform have repeatedly failed, in part because appeals to Brewer or the National Guard Bureau’s inspector general have been simply referred back to Arizona Guard headquarters.

“The organization is there to take care of soldiers. That’s what we’re supposed to do,” White said. “But what they’re doing is taking care of good ol’ boys. And, when victims come forward, the Arizona Guard turns on them and eats them.”

White and several other officers came to The Republic with their grievances out of frustration that the problems were not being addressed. Others shared their views confidentially for fear of losing their jobs.

“I’ll probably get retaliated against,” White said. “I’ll be gone. I think they’re already going for me.”

But here are some other people! And they say the same things, and different things!

Lt. Col. Paul Forshey, who recently retired as the National Guard’s top lawyer, or JAG officer, said he was dismayed that a list of reforms suggested by a panel of high-ranking officers was disregarded by top leaders. “I have never seen a board like that ... where command did not follow the recommendations of three senior officers.”

The Guard last week accused Forshey of violating attorney-client privilege and threatened him with a state Bar complaint for speaking with The Republic, but he said he won’t be silenced. He said an ethical breakdown has created a culture of arrogance.

Someone who works for Jan Brewer though was all nah mang. Nah.

[Jan Brewer appointee and top Guard officer Major Gen. Hugo] Salazar denied ignoring recommendations for reform. He said suggestions were carried out, though with modifications. He also rejected inferences of a problematic culture.

“We do not have a corrupt command climate in either the National Guard or in recruiting,” he said. “We address misconduct. The criticism is neither fair nor true.”

We are sure that is exactly right, because after all, he says so.

The moral of the story is Paul Ryan, who did not shoot that old homeless with a paintball gun, really is a living saint.