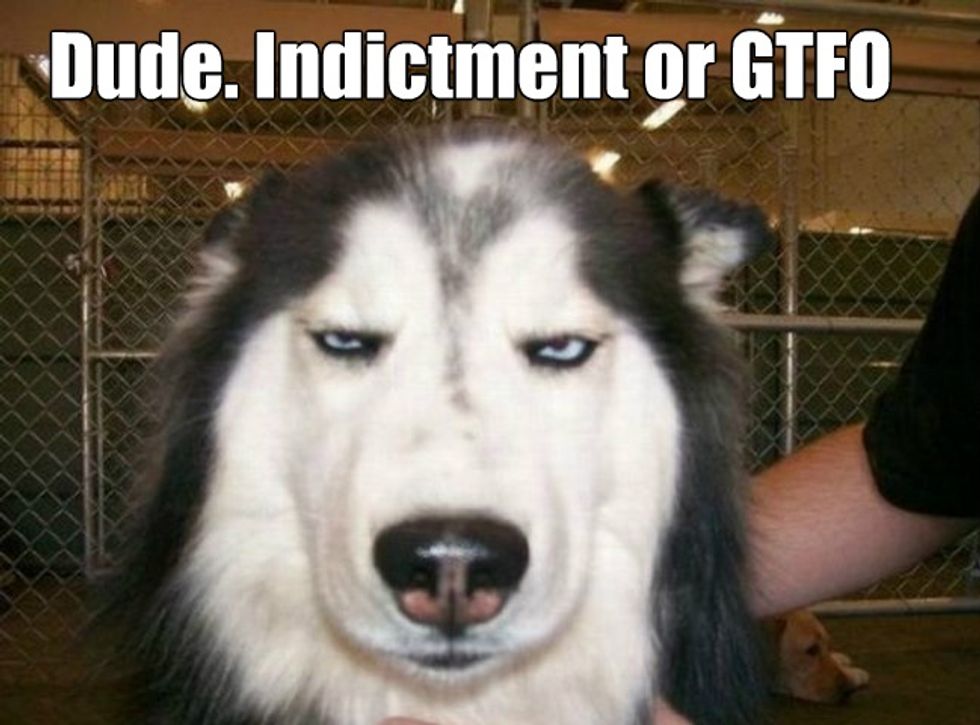 Tired of stories about cops getting away with killing human beings and escaping prosecution? Here's a story of private citizens getting away with killing 21 dogs and escaping prosecution. You're welcome. Oh, and the private citizens happen to be the son and daughter-in-law of Arizona Sen. Jeff Flake, although only an embittered cynic would think that fact played any role in the decision to (at least temporarily) drop animal cruelty charges against Austin and Logan Flake.

The Flakes were temporarily managing a Phoenix-area dog-boarding business where, in June of this year, 21 dogs died of heat exhaustion while locked in a shed. The facility's owners, Todd and MaLeisa Hughes, were out of town and left the Flakes in charge of the place. Never leave Flakes in charge of anything, man. Initial reports of what happened were awfully sketchy, and included a claim that one of the dogs had chewed through a power cord on an air conditioner. To make matters worse, when the owners returned, they left voicemail messages for owners of the dead dogs, claiming that the animals had run off into the desert after digging a hole under a fence.

As our own Snipy, dog-parent extraordinaire, said at the time:

Oh sweet jesus in heaven. We would go full on Kill Bill if we entrusted our dogs to someone that (1) turned over responsibility to some randoms for the weekend rather than watching the dogs themselves; (2) didn’t check where the dogs were for long enough that they died of heat exhaustion and (3) FUCKING LIED ABOUT IT.

On Monday, 21 felony and misdemeanor charges against Austin and Logan Flake were dropped -- possibly temporarily -- after defense attorneys called attention to problems in the case prosecutors brought before a grand jury:

[Maricopa County Attorney Bill] Montgomery said Monday that the case the prosecution presented to the grand jury didn't take into account the potential for problems with an air-conditioning unit in the room. "This could impact a Grand Jury's charging decision and how we might present a case to a jury trial," he wrote.

The defense had contended that the prosecution claim that the Flakes had been negligent was undercut by evidence that a clogged air filter caused the dogs' deaths; prosecutors had told the grand jury that the AC had been in good working order. A single charge of fraud against the kennel owners remains in place.

It's still possible that the animal cruelty charges may be pursued with a new grand jury by Maricopa County Sheriff Joe Arpaio, because the case has excited great outrage in Arizona and elsewhere. You don't go pissing off dog lovers.

And yes, we're now feeling more than a little queasy at the realization that Joe Freaking Arpaio may be more aggressive about seeking a second shot at justice for a case involving dogs than Missouri's entire law enforcement apparatus was in bringing a solid case to the grand jury in Ferguson.