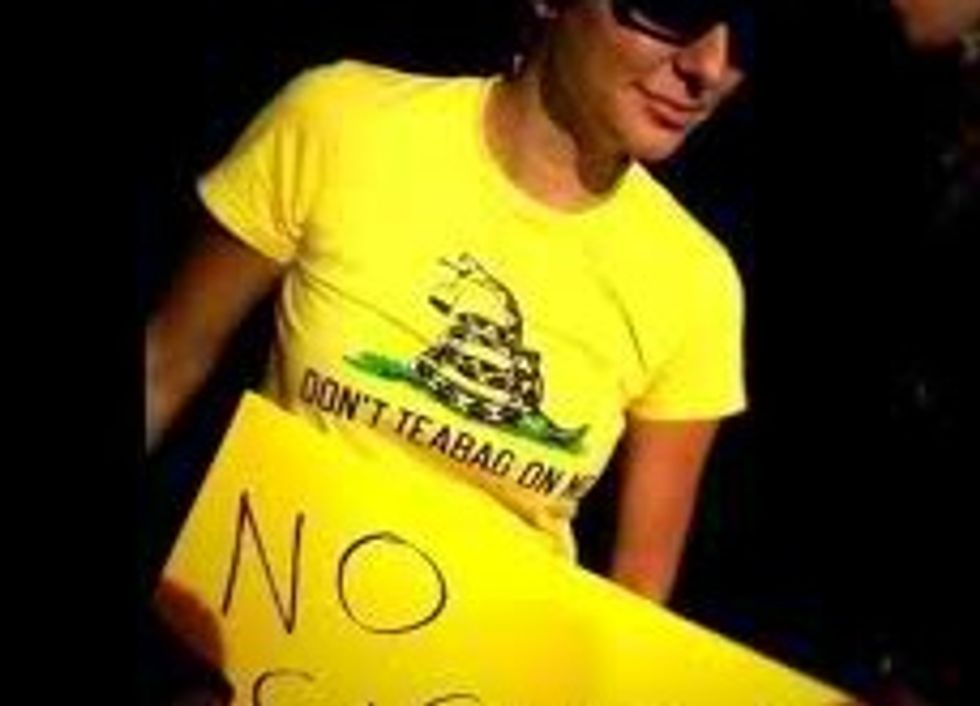 No legislative body in WORLD HISTORY has compared to the greatness of the Republican/Tea Party-led Arizona state senate, which bravely responded to Jared Loughner's slaughter in Tucson by creating an official state handgun and alsolegalizing loaded handguns at all public events. But the Arizona Senate Republicans have proved they stand for more than just slaughtering children and shooting holes through the brains of Democratic politicians -- the Tea Party members of the AZ state senate are creating brave new ways of legislating financial support for the Arizona Tea Party!

On Thursday, Arizona Republicans introduced SB 1402, to create special "Don't Tread On Me" Tea Party license plates that old white people can buy to put on their Ford Excursions so they can be assholes in every possible way while burning gasoline bought from Arab dictatorships on their way to CostCo. And the Tea Party will get $17 from every $25 "special license plate" -- so the government will actually be paying the Tea Party to continue bravely battling the use or collection of money by the government!

What's behind the plates is money: Of every $25 additional annual fee paid to the state, $17 goes to the benefiting organization for its own programs. In this case, a committee of five people, all of whom would have links to tea parties, would divide up the proceeds.

But Senate President Russell Pearce, R-Mesa, denied anything about it is political.

Ha ha, there's nothing political about funneling money from a state's DMV to a political party! Stop shitting on the Constitution, Democrats! [AZ Daily Star]