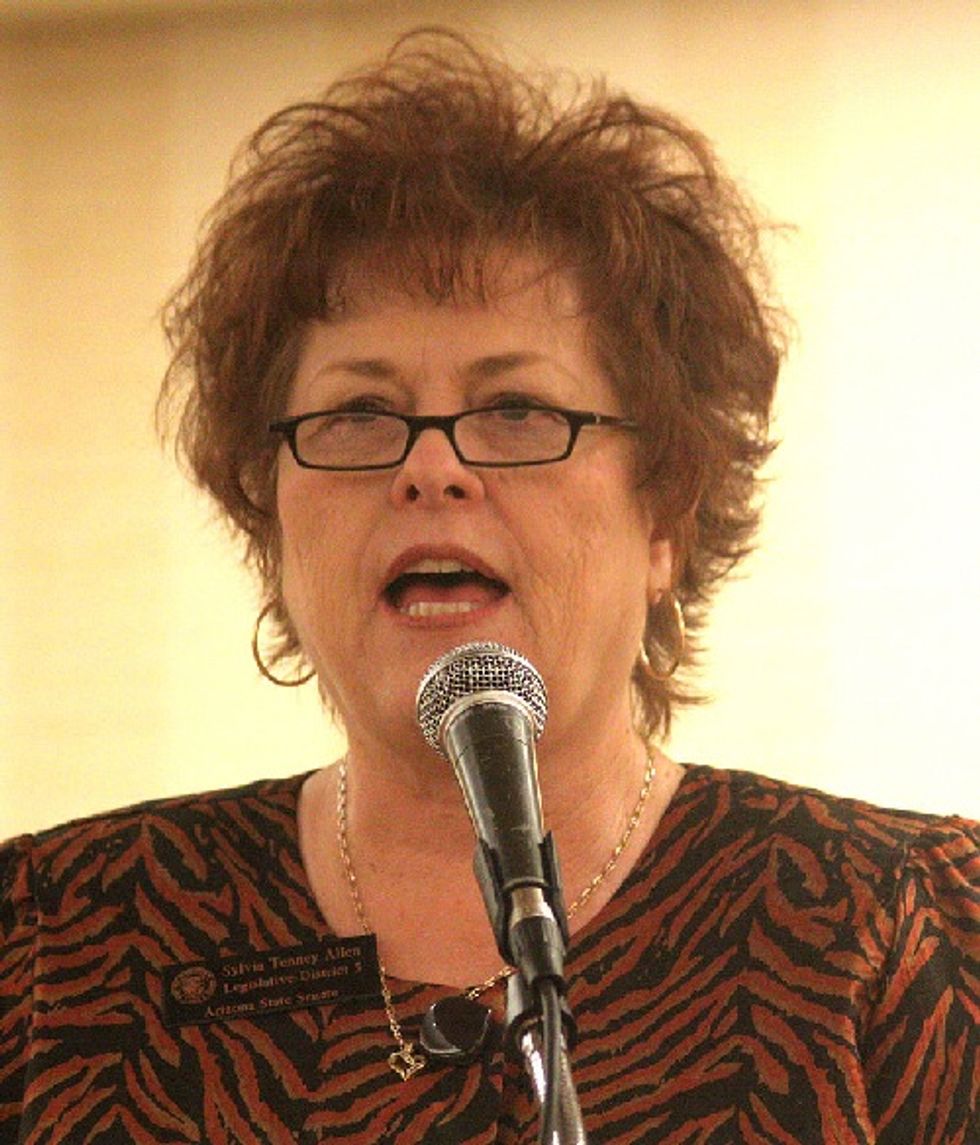 Arizona state Senator Sylvia Allen is a wingnut's wingnut who likes guns and state militias and "constitutional conservative" sheriffs like Richard Mack, the guy who wanted women and children up front at the Bundy Ranch in case shooting started. In 2009, she supported uranium mining in Arizona because uranium and people and animals have all been together for the entire 6,000 years of the Earth's existence, and God never saw fit to require regulations on uranium in the Garden of Eden.

So she's not exactly the person you'd expect to sponsor a bill to strengthen workers' rights against their bosses investigating allegations of misconduct. OK, maybe not all workers -- just cops and correctional officers, really.

Funny thing, really, since her son-in-law is a former detention officer who was accused of sexual misconduct with a female prisoner.

It's amazing how these things just sort of work out, isn't it?

Last year, then-Navajo County Supervisor Allen tried to interfere with an internal investigation into her son-in-law's conduct with female inmates in the Navajo County jail.

This year, Allen has moved on to the state Senate where she sponsored a bill aimed at ensuring that others don't have to endure what she sees as a witch hunt against her son-in-law.

"I just did not know what to do to help," she recently told the Senate Public Safety, Military and Technology Committee, which approved a watered-down version of her bill after she read a letter from her daughter about the family's ordeal. "There was no way to help. It was hard watching."

We suppose it's a little bit like how Rob Portman changed his mind on gay rights after he found out his son was gay, or how the wingnut who heads up the Iowa "Family Leader Summit" suddenly is OK with some marijuana derivatives since he has a child with a seizure disorder. Sure, maybe Sen. Allen's sympathy for the oppressed is a bit more specific in its focus, but she's surely just trying to do what's right for people who have been unjustly accused, and to whom her daughter is married.

You see, in 2014, Allen's son-in-law, Timothy Hunt, was a detention officer at the Navajo County Jail, and he either got himself into a smidge of trouble for inappropriate interactions with several female prisoners, including one he persuaded to give him a blowjob in exchange for cigarettes and matches... OR, as seems far more likely, Hunt is an innocent lamb who was just doing his job until a cabal of his bosses at the jail conspired to make up completely unfounded accusations against him, persuaded six female prisoners to lie about him making "sexually suggestive remarks and gestures" to them, and used a fake polygraph exam to make it look like he was deceptive.

While the women's allegations were being investigated, Hunt was reassigned to desk duty. Allen was a Navajo County Supervisor at the time -- she'd been in the Senate from 2008 to 2013, then served as county supervisor, and was returned to the Senate in the 2014 election -- and she was not one bit pleased, so she texted Sheriff K.C. Clark to find out just what kind of rinkydink operation they were running at the jail.

"I need to talk to you about what is going on in the jail," she texted on April 29. "The commander put up a note in the control room telling EVERYONE that Tim Hunt was not allowed into the jail this was before he got to work then they made him sit out front all day not telling him why he was being investigated. He was humiliated and no one said WHY."

While an independent investigation continued at the jail, Allen continued to do her own "investigation," claiming that the county's computer files had been tampered with and generally making a pain of herself, for the sake of justice, of course. Despite her efforts, the actual investigator (no doubt part of the plot) found that four out of the five claims against Hunt were valid, determining that

"the preponderance of evidence" suggests among other things that he provided cigarettes to an inmate after she performed a sex act on him in a shower.

"Despite Hunt's denial of wrongdoing, there was significant consistency between the accounts of the witness female inmates, and there is no credible evidence of any conspiracy," the investigator wrote, in a June 25, 2014, report to the Navajo County Sheriff's Office.

In July, Hunt took a polygraph test and was deemed "not truthful" when he denied engaging in oral sex with a female inmate, according to the polygraph report.

Hunt resigned, and the Yavapai County Attorney's office has yet to determine whether he'll face criminal charges. Then in November, Allen ran again for state Senate and was elected, and was even chosen to get her old position of Pro Tempore back. Getting straight to The People's legislative priorities, in February she filed Senate Bill 1467, which would protect law enforcement officers facing disciplinary proceedings. Among other provisions, it would allow accused cops (and jail guards -- hi, honey!) to have a full trial in an appeal, and would also bar polygraph exams in investigations (Yr Wonkette actually thinks that's a good idea, seeing as how polygraphs are crap science). The bill is enthusiastically supported by Arizona's police unions. So yeah, super-conservative creationist free market lady is suddenly a union hero.

Arizona Republic columnist Laurie Roberts hasn't had any luck in getting Sen. Allen to return her calls, but she'd like to ask the Senator what it was that made her turn so pro-union all of a sudden. She also wants to ask about Allen's support for Richard Mack's crazy plan to take over Navajo County and make it a "constitutional conservative" libertarian paradise, where federal authority will be treated as more of a suggestion than as law. We don't know about that -- oh, sure, her son-in-law's oppression by the current sheriff could be a motivator, but Allen seems like she'd be inclined to support Mack's plan for Arizona's Own Somalia regardless.

In any case, it's good to see a politician standing up for We The People, especially when it's We The People Who Married The Politician's Daughter.