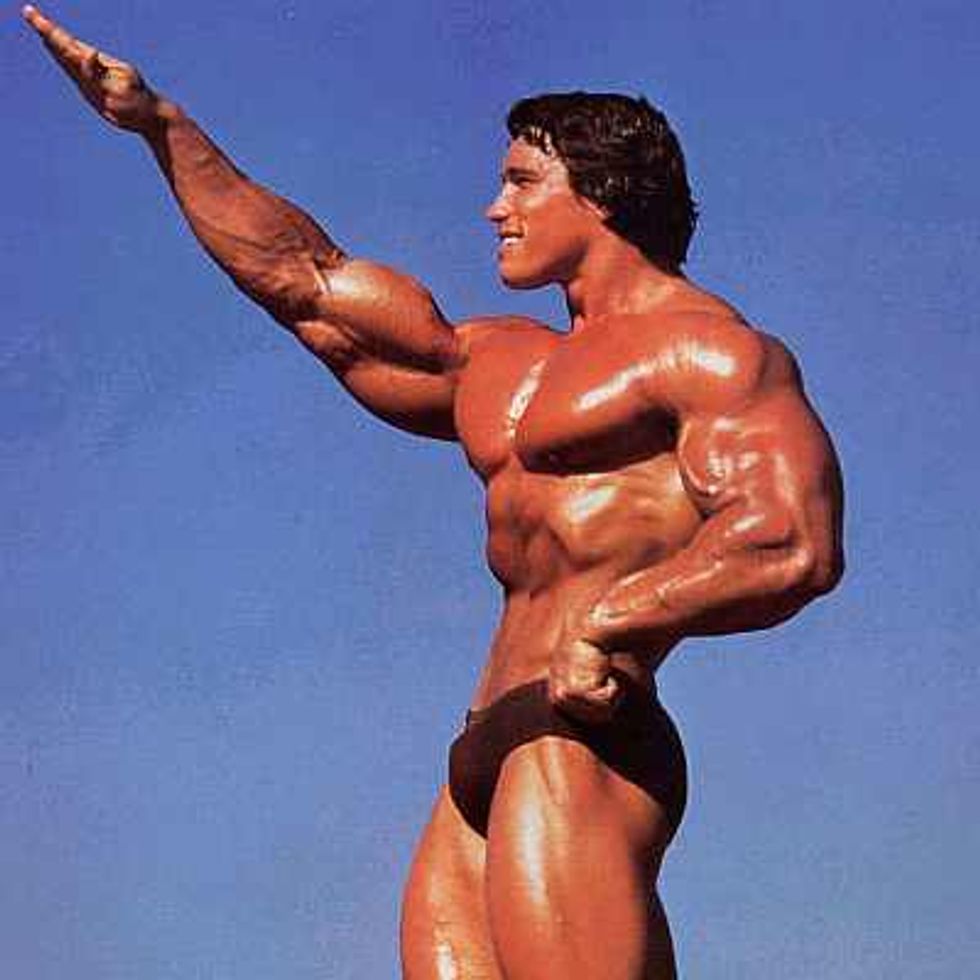 Americans, we need to band together. Not you fake-Americans what who love the gehys and messicans and blahs and all the creepy different people who are ruining this country white folk rightly earned by killing off the people who were here before. We need Real AmericansTM to stop our country from being overrun by damn forriners (and not those guys who sing Juke Box Hero cause they ROCK). First, we have a Kenyan socialist dictator spiking footballs, and then the House of Representatives was bullied by a Moose-cock sucking Canadian! Now dirty eastern Europeans want in on the action, per Page Six:

Action star and former California Gov. Arnold Schwarzenegger has been lobbying for support to change the law to allow him to run for president in 2016, Page Six has exclusively learned.

Why don’t we just hand over the keys to the nukelur codes to the United Nations?!?

Now, this news just happens to breakwhile Ahhhhhhnnnnolllld is out promoting his new motion picture big screen talkie, “Escape Plan,” also starring Sylvester Stallone. Publicity stunt? Perhaps, but it sounds like Conan the Barbarian might be for serious about getting all Kindergarten Cop on Congress and the rest of DC:

One source said: “Schwarzenegger has been talking openly about working on getting the constitutional rules changed so he can run for president in 2016. He is ready to file legal paperwork to challenge the rules.”

The “rules” mentioned are the Constitution, which says that no foreign-born person can occupy the White House. To change the Constitution, one would need an amendment passed by a two-thirds majority of the House and Senate, then ratified by 38 states. Yet there are some Constitutional scholars who think there may be a way around this:

Columbia University Law School professor Michael Dorf, an expert in constitutional law, said about the Governator’s case in 2007, “The law is very clear, but it’s not 100 percent clear that the courts would enforce that law rather than leave it to the political process.”

We are not a constitutional scholar, nor have we ever played one on teevee. However, this seems kinda cut-and-dry to us. Also, what kind of world is this where a movie star and former California governor thinks he has a shot at being President? What a ludicrous idea.

This is not the first time the star of Jingle All The Way has flirted with the idea of starring in the DC reality-based series about a perpetually dysfunctional government. A few years ago, he told Human Chin Jay Leno that he would make a White House run if the law/Constitution were changed, just as foretold by the prophecy in Demolition Man.

We look forward to 2016, when the argument of who has a larger body count -- Hillary or Arnold -- becomes the main theme of a Presidential election.