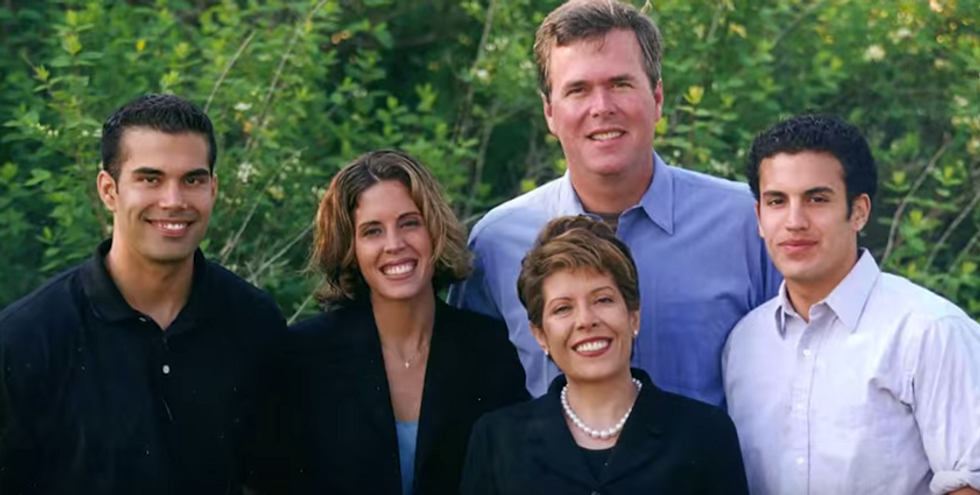 Jeb! Bush is not your typical Republican. For one thing, he only uses "anchor babies" to slur Asians, not Latinos, which would be rude, not that there's anything wrong with that. Also, while he is technically and literally and in all other ways very, very white, he was a Hispanic voter one time. Half credit.

Plus, unlike all other Republicans running for president, Jeb is fond of Hispanic things, as he boasts in a new ad, in which he speaks entirely in Spanish (suck on THAT, Donald Trump):

The United States of America is a great country. Thanks to the people that come from all over the world, contributing to our economy and community. To me, Hispanic culture is very important and positive.

What a brave position for a Republican presidential candidate to take, in the year 2015. Hispanic culture is good. Feel the love? Feel the whooooosh of Latino voters rushing to the Republican Party? Jeb, he is two thumbs up on Hispanic things.

Jeb's wife, Columba, is also in the ad because she is "his secret weapon."

Speaking about his potential appeal to Latino voters in late July, Bush told reporters: “I have a secret weapon, Columba Bush, I have Hispanic children, I have Hispanic grandchildren, I’m part of the community, so I think there’s a way to campaign and there’s a record that I have that … when people see it and hear it is, I think it’s going to be okay. I cannot imagine having the same kind of numbers that Republican candidates have had in past presidential elections. I’m pretty confident that we can do better.”

This is my beautiful Hispanic wife. These are my beautiful Hispanic children. (They are not anchor babies, because they were not made in China.) Do you like them, Hispanic voters? Do you see how I, Jeb, am like you, and I get you? I am not like other Republicans. I will never explain, for example, that I fired "illegals" from trimming my bushes because "I’m running for office, for Pete’s sake, I can’t have illegals." I, Jeb, would never say such a thing. I get you.

Columba also speaks in the ad, of "faith, friends and family," but in a neat twist, she does it in English, even though she is a Mexican, from Mexico. And together, Jeb and Mrs. Jeb show how we are a melting pot of word salad, God Bless America! (We don't know if either of them became confused while making the ad and started speaking French. That can happen sometimes because foreign languages that aren't American are tricky.)

Do not think, however, that Jeb! is pulling out his Hispanic wife, BOOM, to pander to Latino voters at random.

In conclusion, Bush adds: "Hispanics contribute more every day to our culture; they are an integral part of the American dream. For these reasons and more, I invite you to celebrate Hispanic Heritage Month because we are all Americans."

You may be wondering how you can join Jeb! in celebrating Hispanic Heritage Month. You can, of course, marry a Mexican. It's like a lifetime subscription. If you make Mexican babies with your Mexican, so much the better.

You can always claim to understand the immigrant experience (that's code for Hispanic, because only Hispanics immigrate to America, except for the Chinese anchor babies who also come here). It doesn't matter if you actually are an immigrant. If you have ever met an immigrant, or maybe fired one, for Pete's sake, that's pretty much the same thing. Feel free to claim that you "know the power of the immigrant experience because [you] live it each and every day."

If all of that fails, make a video of yourself shaking hands and posing with lots of different Latinos. They're not hard to find, since billions of them are swimming across our borders every day. Be sure to smile and say things like "Hispanic culture is very important and positive." Consider pretending to "work" in a food truck that is maybe [SUBLIMINAL MESSAGE] a taco truck.

Congratulations, you are now Hispanic, or at least a Hispanic-adjacent ally of Hispanics. Won't you consider voting for Jeb, por favor?