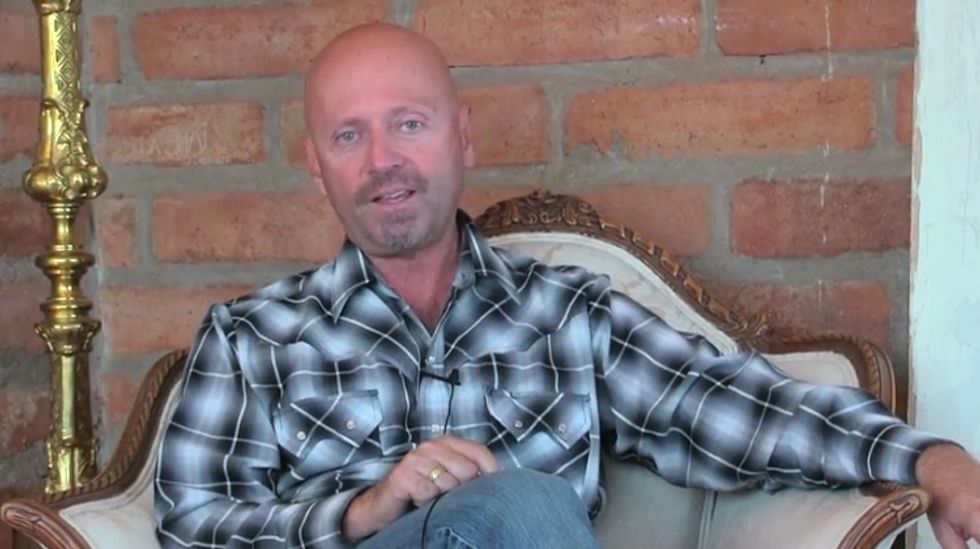 So there's this guy in Bisbee, Arizona, named Adam Miller, who had himself a near-death experience in 1977 and believes it imbued him with the power to heal people -- tens of thousands of them, in fact! An atheist video blogger, Stephanie Guttormson, was a tad skeptical about some of Miller's claims, so in December of 2014, she posted a YouTube video mocking Miller's claims and pointing out that faith healing isn't actual doctorin'. After hearing back from several of his clients who were outraged that anyone would criticize the man who made them all better, Miller sued Guttormson, claiming copyright infringement and defamation. So far, the chief effect seems to have been that Guttormson's video has gone viral, and thousands more people now share her opinion that Miller is a fraud.

Here's her video; we have to confess that even though we agree with Guttormson, we find her style a bit tedious: nobody should ever try to get a laugh by throwing cricket noises into a commentary.

While Miller's official website has been down for a day or so, the magical healing power of the Internet has brought it back from the dead, and we can learn all sorts of fascinating things about his mad healing skillz. He claims to have held "healing sessions" in which he's put "tens of thousands" of people directly into contact with "the Greater Universal Power." So let's be clear here, he's a woo-woo faith healer, not a heal-in-Jebus's-name faith healer. Miller says he's worked with people suffering from "severe chronic pain, blood diseases, multiple sclerosis, severe injuries, incurable diseases, and every other kind of illness out there big or small."

How does he do it? He doesn't do anything at all, which is probably why it's defamation to call him a quack:

The Great and Holy Beings, such as Mother Mary Jesus, Buddha, Quan Yin, Saint Germain, Archangel Michael and many others come into a person's body and transmute with light every single cell and raise the vibratory rate. In other words, diseases or injuries in the body have a very low, darkened vibration and when a Holy Being works with any person it changes the cellular structure permanently and the issue that is being worked on will never come back. This work is permanent. It is important to understand that Adam Miller is not a conduit, or psychic or related to any other work on the planet. This work is a result of Adam's death experience. Adam Miller would never claim to do this work himself. It is done by Holy Beings only.

Of course, you still have to pay him to get in touch with those Holy Beings, because he's the one who got their heavenly phone numbers when he had that near-death experience in the '70s. He's got that thing and it's fucking golden, he's not just giving it up for fucking nothing.

Guttormson, who serves as operations director for the Richard Dawkins Foundations, went and made fun of Miller, questioning the whole "low, darkened vibration" theory of disease and insisting it's not quite real. She also said Miller is "a charlatan, he’s a swindler, he’s a snake oil salesman" and warned, "You risk your lives delaying or forgoing proper medical treatment by going to him for help. And more importantly, for believing his unsubstantiated claims.”

This didn't go over well with Miller, who posted a video reply accusing Guttormson of being horrible and hurting people who want to heal, and also of perpetrating a HUGE DECEPTION because she didn't reveal in her video the highly relevant fact that she is a transgender lady. How can you even trust someone whose very own physical body is a lie, and who doesn't reveal that they used to be named Joel, not Stephanie? Miller's not winning himself a lot of goodwill, we think.

Miller also filed a lawsuit against Guttormson, claiming "copyright infringement, tortious interference with business expectancy, and defamation per se." Miller claims that Guttormson made illegal use of a video that he had not released publicly, but which had only been uploaded to his wife's password-protected YouTube page, which was "hacked" sometime in 2014. Miller's complaint is careful not to accuse Guttormson of doing the hacking (in her own video, she says Miller's video was sent to her by someone else), only of violating copyright by reproducing his full video, interspersed with commentary by Guttormson.

We are Not A Lawyer, so we don't know whether Fair Use would actually cover meshing all six minutes of the original video with an additional six or seven minutes of commentary. The copyright nerds at Techdirt dismiss Miller's lawsuit as "a joke" and say that Guttormson shouldn't have much difficulty defending her video as a legal use of Miller's dumb healing schtick. Probably one of the hotshot attorneys who reads Wonkette could say some interesting things about all this, so it's a pity that we don't allow comments.

The actual claims of defamation seem a bit difficult to buy. For instance, Miller objects to Guttormson saying that at any session with Miller, "You will be fed faith-based bullshit." False and defamatory! says Miller, because "Mr. Miller's work does not require a client to hold any faith, and he has worked with non-believers and atheists." Mind you, this is a guy who says his healing process works by talking to patients about the traumatic experiences that made them sick in the first place, and then:

We put them on the table, and great holy spirit comes and breaks up dark cellular structure that creates any illness. Because I believe that illnesses are of a dark path.

So that sounds possibly a little faith-based, just maybe.

Miller also says that the line telling people that they put their lives at risk by consulting Miller instead of getting real medical treatment is an obvious attempt to hurt his business. After all, "With over 37 years' experience as a healer, Mr. Miller had a valid business expectancy that he would continue to serve existing and new clients," and by calling him a fake, Guttormson "intentionally and improperly interfered with Mr. Miller's business relationships" and has damaged his business a whole lot, with the exact amount to be determined at trial. We're guessing "oodles." Maybe Guttormson should point out that Miller says the Holy Ones did all the heavy lifting anyway, so presumably his business model was iffy to start with.

Needless to say, Guttormson has set up a GoFundMe to defray the costs of responding to Miller's nuisance lawsuit; as we go to press, she's almost 3/4 of the way to her $10,000 goal. We're actually hoping this does go to trial, so that Miller can prove to the world what a terrific healer he is. We'd also love to see the Holy Ones countersue Miller to demand their cut.