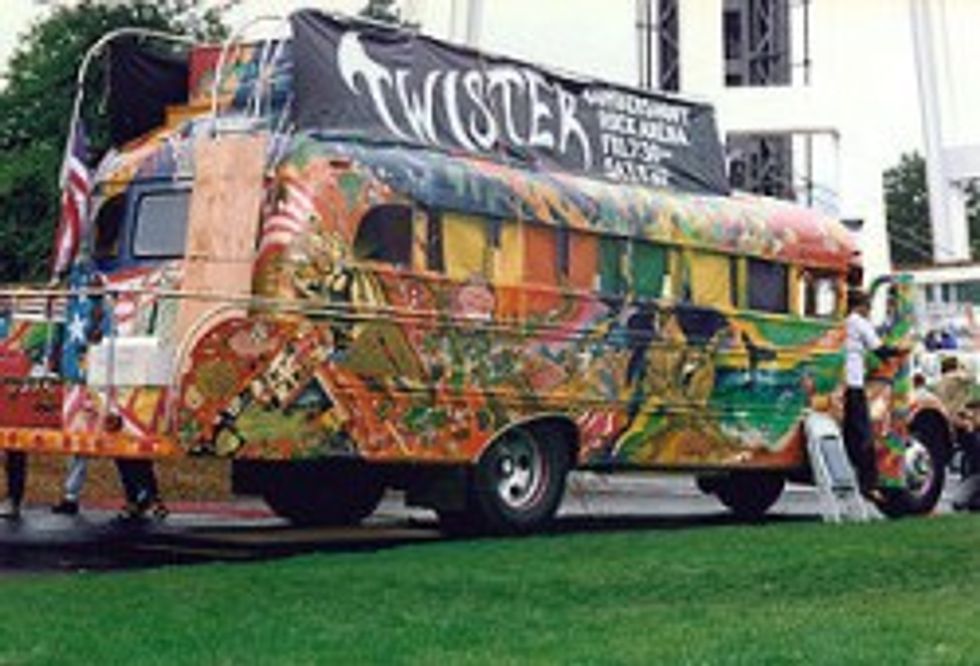 The last 12 months have not been so kind to the screeching osprey of pathological racism known as Pamela Geller. Last June her cat sat on the keyboard (or something) andreleased a stream of consciousness post on her blog that sounded like David Duke trying to do a Captain Beefheart cover after mixing Peyote and Adderall. Then came news this month that the nice folks who run CPAC (who have no problem giving space to white nationalists and the John Birch Society) decided that even they were too embarrassed to invite Geller to their party lest she start ranting about how Muslims love goat sex (again).

In truth the only thing keeping Geller in decent spirits these days, besides the thought of Palestinian children being shot in cold blood, was the jolly good time that she was having pissing off commuters in cities across the country with obnoxious bus ads linking a faith shared by 1.62 billion people with a handful of assholes who everyone hates. But now even that piece of solace has been unfairly taken away from Geller as she has been out-trolled by the most powerful enemies of freedom in the world: the San Francisco City Council.

It turns out that those vicious jew haters™ took the 20k Geller spent to install the ads and the revenue that they generated (a sum which could be counted in a Cointsar) and gave $5,000 to the filthy Jihadists at the Human Rights Commission for a study concerning issues of discrimination against the Muslim community. In response Geller has announced that this aggression will not stand, and that she has declared an intifada against the city of San Francisco, WITH THE LAW.

Geller asserts that San Fran's decision to devote municipal revenue towards the Muslim community in ways beyond constant surveillance or indefinite detention amounts to a violation of the 1st Amendment’s Establishment Clause. According to Geller, subsidizing this study is actually "showing preference by the U.S. government of one religion over another. San Francisco is giving  ‘preferential' ‘accommodation' to Muslims to benefit one religion over all others.” It’s sort of like the city putting on a nativity scene outside of a government building, only here instead of the Virgin Mary and Jesus it’s a study that will most definitely be used to glorify the martyred freedom fighters of the holy war against Western Christian imperialism.

Now, your author is just a simple heavily indebted dumb law student, who uses his time reading idiotic shit that people like Geller write instead of studying the Constitution like he is supposed to if he wants to ever pass the bar. However, this rather expansive view of the Separation of Church and State seems like kind of a stretch -- as in it’s so supremely dumb that no sane lawyer is going to risk having their bar card set ablaze by advancing this sort of claim. That said, Orly Taitz is available and (believe it or not) is still in good standing with the California Bar, so you might want to give her a ring, Pam.

Making matters even more difficult for Geller is the pesky issue of “standing.” Despite the fact that Geller, like god or Batman, feels the pain of injustice wherever it takes place, it seems that the stupid law only allows suits involving the Establishment Clause to be brought forth by the aggrieved taxpayers themselves. So Geller is now facing the herculean task of finding the one deranged nutbag who also sees the world through her unique prism of hate and thorazine in a city where parking meters are powered by hugs.

Where are you, lonely Pam Geller follower who feels like having their last name live in infamy forever in Con Law casebooks as the plaintiff in of one of the most worthless and idiotic law suits of all time? How about surfacing from your bomb shelter long enough to be Pam Geller’s Rosa Parks in her latest Crusade to give the city more of her money in the form of lawyers fees and SLAPP fines? Just keep two things in mind: that she pays you in cash before you file, and make sure to never look her directly in the eyes (unless you want to risk joining the screaming chorus of souls trapped inside of her head).