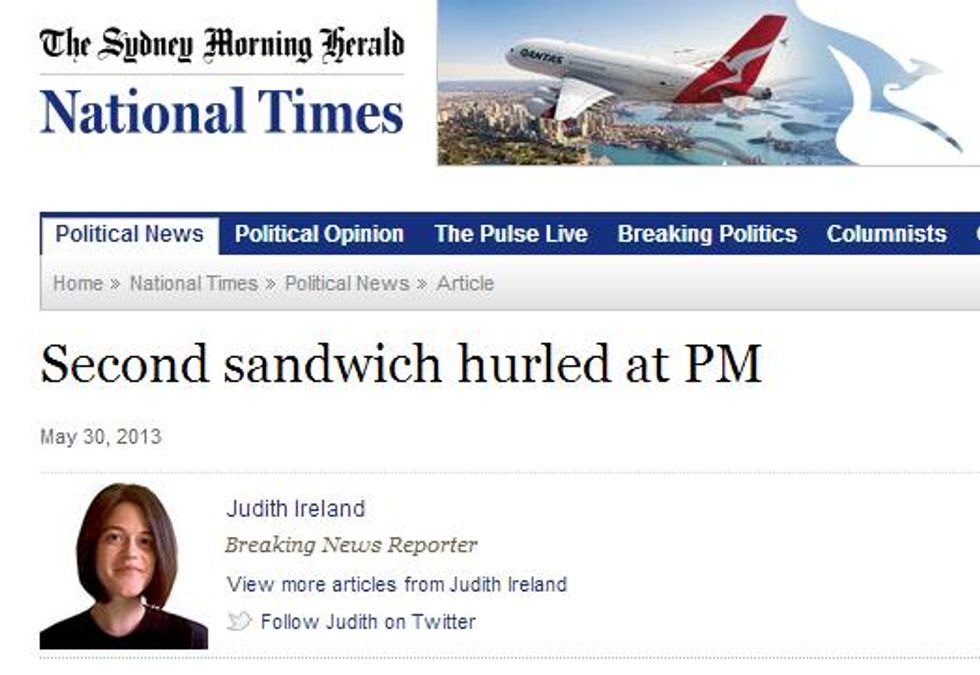 Here's one for your SAT analogy section: George W. Bush is to to Iraqi journalists andshoes as Australian Prime Minister Julia Gilliard is to high school students and sandwiches. For the second time within a month, the Sydney Morning Herald reports, Gilliard has been the target of a "bread-based missile" flung during a school visit, this time while visiting a high school in Canberra to announce some education grant thing. Earlier in May, a student at a high school in Queensland was suspended for nailing the PM with a vegemite sandwich. (The student's motive was unknown, but the working theory is that the PM asked him if he speaka her language.)

Happily, no one seems to be going too nuts about any of this, because for godssake it's a couple of sammiches. Possibly because Rupert Murdoch is now an American,  and nobody has informed Alex Jones that the student in the vegemite sandwich incident says he was merely an innocent bystander who was framed. Gilliard simply said at a press conference later in the day, "They must have thought I was hungry." Australian Capital Territory Chief Minister Katy Gallagher (we think that is like being the Mayor of DC, or maybe Princess of The Moon) also laughed off the incident, saying

"Schools are full of kids, kids occasionally do silly things. Occasionally you're going to get a rogue student...From what I saw –--and I was squashed in the crowd -- it was a really excited student population eager to talk with the Prime Minster and she was very generous with her time."

Still, we have to fault the Aussies on Twitter who have started the #sandwichgate hashtag. Come on, people, it should be #sandwichghazi.

It's time, Pacific Northwest Wonkers! Join Yr Doktor Zoom at the reader-organized Seattle Drinky Thing TONIGHT (Saturday, June 1) from 7 to ????? at The Blarney Stone in beautiful Downtown Seattle. Additional details at this linky. And then on Sunday, the embarrassing sideways photographs! Hey, does somebody have a USB cord that fits a Kodak digital camera? We're just asking...