Auto Industry Bailout Is Annoying On All Levels 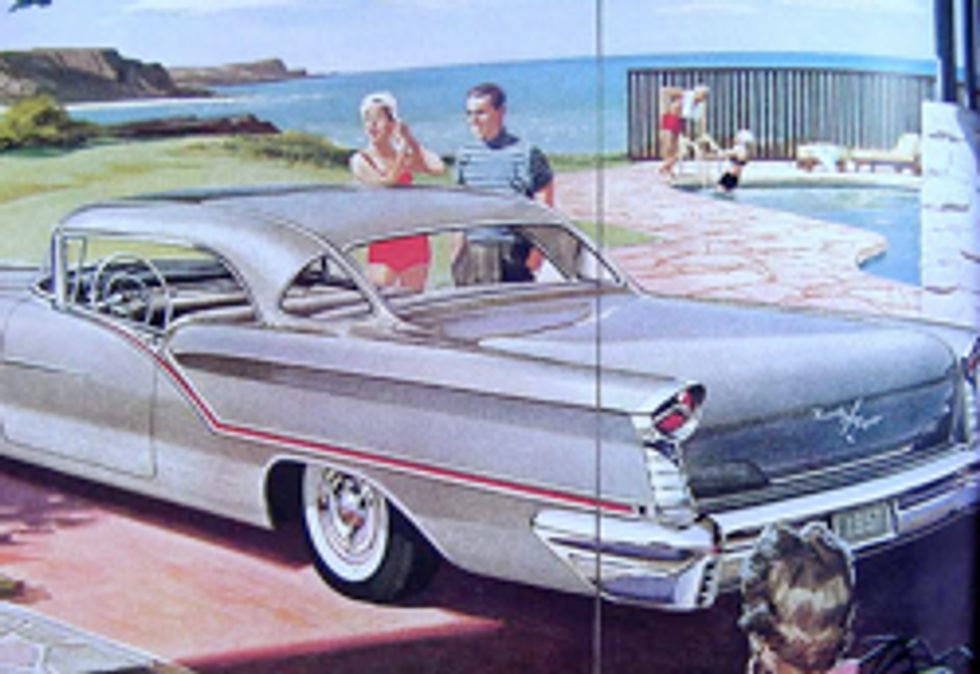 A thing that sucks about our nation's current financial unpleasantness is that Congress wants to find solutions to it and Congress happens to suck. Other people who suck in this situation include Hank Paulson and "President" George Bush Jr. Barack Obama, too, for throwing himself into this situation that can only end in a sucky outcome. And lest we forget, the American auto industry -- known by its appropriately sucky metonym, "Detroit" -- sucks. So. Do we give car companies money for sucking or do we let a ton of workers in depressed areas lose their jobs and family health care plans? Oh, the wacky situations America finds itself in after ignoring massive problems for decades.

The Big Three automakers and GM specifically are on the brink of bankruptcy -- might not be able to meet payroll! -- after the credit crunch and energy crisis made the last few American-buying consumers say to themselves, "Anyone who buys a LINCOLN is a fucking idiot." House Democrats, led by her majesty Nancy "Don't Take No Guff" Pelosi, see this situation, realize that they can't let union interests down and start shouting, "GAHH UHHH, HERE TAKE SOME $$$$ CAR PEOPLE," like banshees -- special banshees that are concerned about Michigan and Ohio in 2012.

Barack Obama asks George Bush in a historical transition meeting to give $25 billion from the $700 billion financial bailout package to the auto industry. It would be invested in the companies under the condition that they agree to develop new green technologies. (Which they will never do, because who cares what some slappy Democrats ask in return? Those pussies would never enforce. So it would be back to the Golden Days of Capitalism for GM: burning through government cash to build cars that no will ever buy.) If GM went under, many Americans who are already struggling would, you know, really struggle, and the American auto industry would be gone forever.

George Bush tells him, HMM... maybe if you people pass that Colombian slave labor treaty first, then he'll give it a thinky. "Not that I really care at this point," Bush adds.

Hank Paulson hears about the Democrats' plan to snag some of his $700 billion and says this morning, "no fuck you, get your own play money," while handing out $100 bills to Goldman Sachs orphans.

Rep. Barney Frank, who puts together every single piece of legislation in our government, ignores Paulson and just starts cold writin' it up:

WASHINGTON – A key House Democrat is writing legislation that would send $25 billion in emergency loans to the beleaguered auto industry in exchange for a government ownership stake in the Big Three car companies.

House Speaker Nancy Pelosi and Senate Majority Leader Harry Reid are pressing for quick passage of an auto bailout during a postelection session of Congress that begins Tuesday.

The legislation being drafted by Democratic Rep. Barney Frank, chairman of the Financial Services Committee, would dip into the $700 billion Wall Street rescue money approved by Congress last month for the auto aid.

Sen. Carl Levin is writing a separate $25 billion bill, because the Michigan legislator just happens to care about this issue.

So, Dear Readers, do you think Congress should give Car Companies money because they're large employers and deserve one last shot at developing innovative products? Or should they undergo bankruptcy, which might be the most visceral wake-up call for the backwards American auto industry? These companies are not hugely interconnected Wall Street financial firms, so their collapses would not find a way to ruin your 401(k) if you have nothing to do with them. (Ha ha, just kidding, of course they will find a way to ruin your life.)

DO YOU GIVE THEM THE GREEN?

This is your Ethical Quandary for the evening. #2 pencils required.

UPDATE: Now who are the stupids behind this comical development: "Falling Gas Prices Jump-Start GM SUV Sales." The Communists of course!

The plant will produce GM SUVS, the Chevrolet Captiva and Opel Antara, which have become status symbols in Russia, reported Edmunds.com.

This works out well for everyone! Ship the factories and their workers to Russia where they won't be making "cars" -- they'll be making status symbols. Sexy!