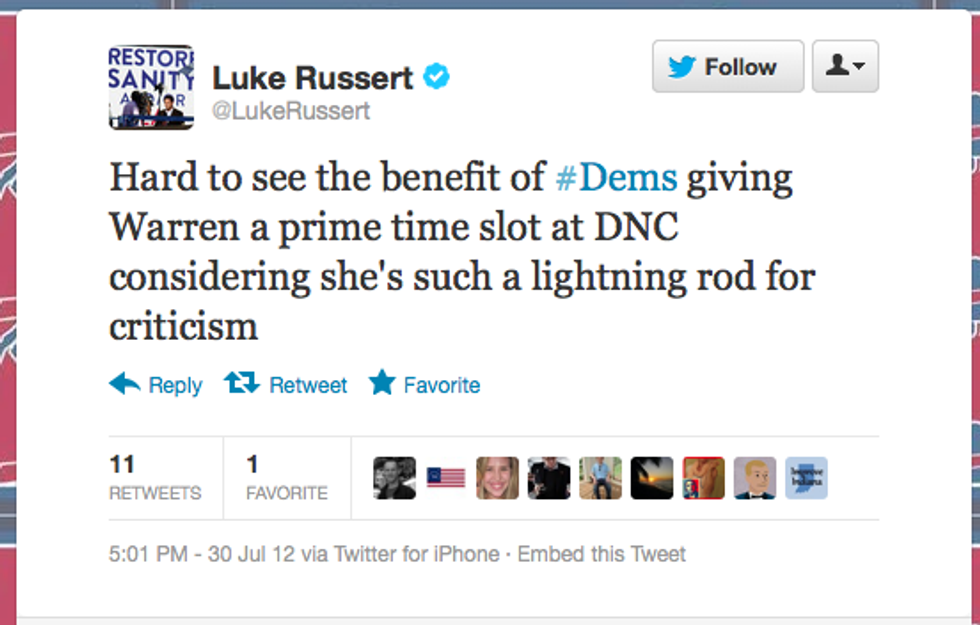 In the annals of political lying, quoting someone out of context is almost not even surprising any more, as anyone familiar with the "you didn't build that" nonsense knows (and yes, same goes for "I like to fire people"). The original comment, disconnected from its context, gets lost in volleys of misleading quotes. But it takes a special kind of chootzpah to lie about someone even as you include, right next to your lies, a copy of the very thing you are lying about. Consider this ad for Elizabeth Warren's Senate campaign, above.

Pretty insane stuff, isn't it? So of course, it's perfectly reasonable that red-'bating doofus Ira Stoll, proprietor of the failed-newspaper-that's-now-a-website The New York Sun would describe Warren's position thusly:

"Elizabeth Warren Praising Communist China as a Model for America"

See what he did there? After all, Warren actually does say that the USA should do something sort of like what China is doing, so clearly she wants us to become a dissident-shooting, abortion-forcing, one-party dictatorship too! This is pretty much the tenor of the whole piece -- for instance, Stoll "proves" that increasing US infrastructure spending to match China's 9% of GDP would be ruinously expensive, even though Warren never says anything about matching that rate. And so on. Mr. Stoll apparently hopes to be remembered as the Emperor Qin Shi Huang of blogging, and has assembled an impressive army of straw men to accompany him to the afterlife.

Just in case Elizabeth Warren didn't already have enough fools to suffer, vapid pudding Luke Russert, notable primarily for his steadfast abstinence from socks, had an insight regarding Warren's scheduled appearance at the Democratic Convention:

Because why would you possibly want to showcase someone at a political convention that the other party doesn't like?

You know who else is a lightning rod for controversy? Barack Hussein Nobama. Maybe the Dems will smarten up and leave him off the program too.