AZ Mandates High School Civics Test, We Do Not Even Have A Problem With That 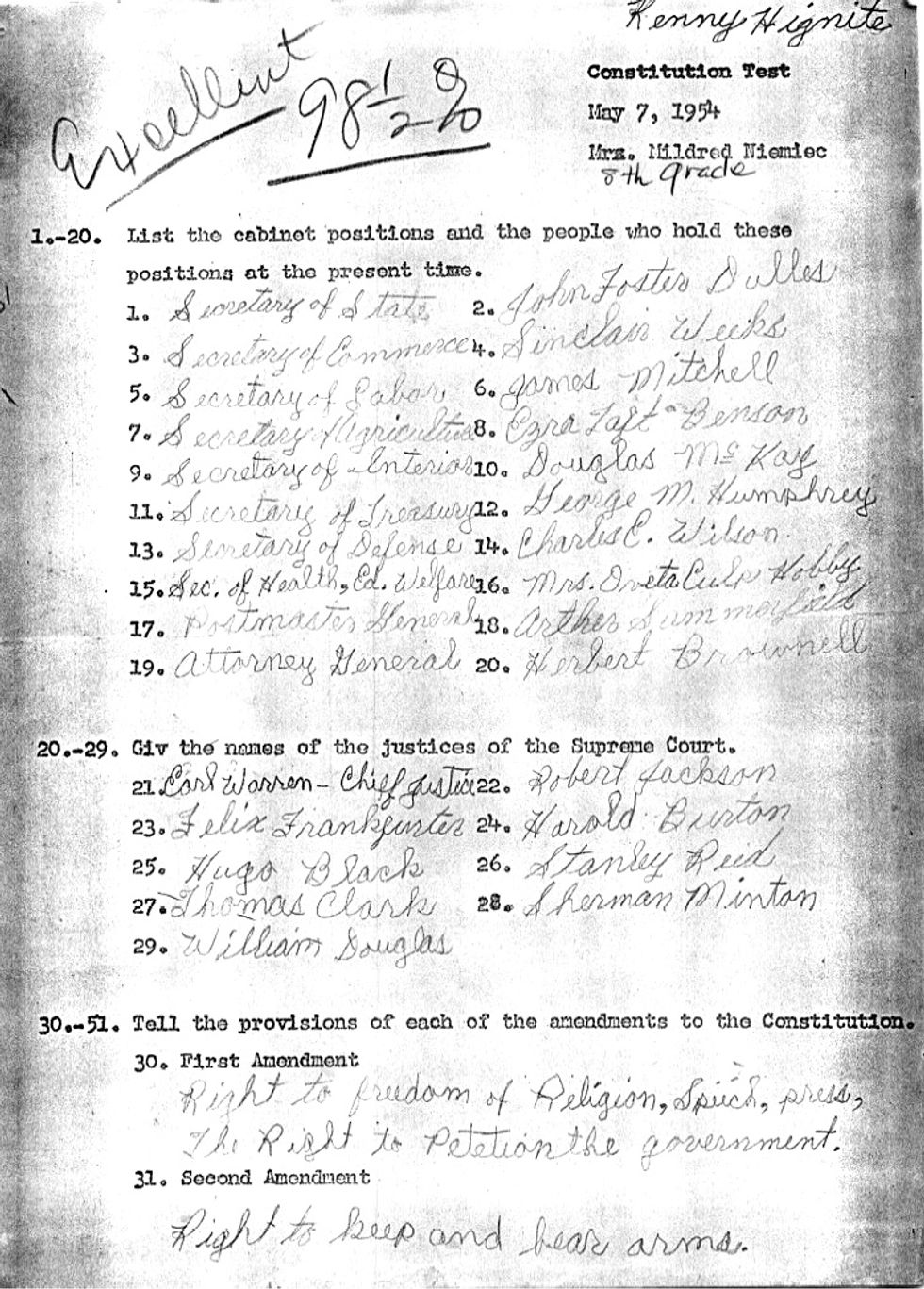 Arizona Governor Doug Ducey (R) signed into law yesterday a bill requiring Arizona high school students to correctly answer 60 of the 100 questions in the civics section of the Immigration and Naturalization test for US citizenship in order to graduate or receive a GED. Although we are always suspicious when Republicans require citizen-related tests, all of the writers at yr Wonkette love civics very much, and it is our hobby that consumes all of our waking hours. And we love it when high school students do civics on each other, so that is probably a good thing to require of them! Really, the more civics the better, and if learning about civics creates voters who are informed about important things, like how democracy should work, and how it actually works, and how important it is to vote, then we think everyone should spend much more time learning civics by reading Wonkette, and also possibly by reading many other publications as well, plus also Wonkette.

Let's civicsplore, together, the impetus behind the new Arizona law, because part of civics is not just taking laws at face value, it is learning more about who is pushing for a particular piece of legislation, and why, and what else they are doing, and to whom. This Arizona law was written by the Joe Foss Institute, an Arizona-based non-profit whose mission statement says, in part:

At the Joe Foss Institute, we know that there are many wonderful teachers of history in the United States. But we also understand that fewer and fewer schools are teaching civics in any sort of substantial way. We know the recent educational emphasis on math and reading (based on the No Child Left Behind law) has had a negative impact on the study of history, civics, and other subjects.

Okay! Our civicsploration has revealed that we agree with this part of the Joe Foss Institute mission statement. We want our snowflakes to know about the math and the reading, but we also want them to know about the civics, and we find that teachers are excellent conveyors of that type of information. Let's civicsplore some more!

[contextly_sidebar id="YpjH5PemfklgeXl6ACWXczshCGhm8UKX"]Some Arizona educators are having a sad about having to spend an entire class period administering the 100-question civics test that the new law requires. Hm, well, that requirement does not sound totally crazy, and yes, we understand that teachers have to teach all of the things, and that class time is scarce, but at least Arizona is not Washington DC, where they hardly ever even have school at all because all of the "snow" that falls there.

Some teachers in Arizona worry (in the comments section of this article by AZ Central, does anyone even read the comments section? That's why Wonkette doesn't allow comments) that the test will be written to include right-wing revisionist history, which, bravo, yes, Arizona teachers! You are certainly right to worry about that, seeing as not only Arizona, but other states, too, have tried to re-write curricula to make sure students are aware that Moses wrote the Constitution or that the Second Amendment is the only important one, or that anything Rush Limbaugh has to say about history has any legitimacy whatsoever. But the test in the Arizona law is the same test that the INS gives new citizen applicants, so that sounds pretty reasonable, too, at least until the law is amended or President Sarah Palin directs the INS to rewrite its test.

The lone Democrat on the Arizona Senate Education Committee who voted against the bill, David Bradley, said:

"Don't be fooled into thinking that this does it, that this solves some bigger problem, because it doesn't. My point now is tests don't make citizens, citizens are tested by their actions."

Bradley also said that "this is not the end-all be-all to citizenship and it doesn't get us any further down the road."

Okay, David Bradley, you are a Democrat, so we are predisposed to like you, and you are correct that tests don't make citizens, but we are still having trouble seeing this test as a completely huge problem. Perhaps, David Bradley, you could have voted in favor of this legislation with the goal of showing Republican Committee members that you could suck up this pretty inconsequential bill, and then maybe some time they would return the favor by voting for a Democratic bill? Because that is civics!

Does it matter that WWII fighter ace Joe Foss was a two-term president of the NRA, in 1988 and 1989, or that Oliver North gave the eulogy at his funeral in 2003, which Dick Cheney also attended, or that there is a shooting range in Scottsdale named after him? These facts give yr Wonkette pause, yes, plus also severe hives and swelling. But guess what, if high school civics students can't get a sixty percent on the INS test, which includes questions like:

Name one branch of government.

What do we show loyalty to when we say the Pledge of Allegiance?

Who is the president of the United States now?

then maybe they have not really received A Education and should not be released into the world to vote all over the rest of us. We would certainly argue that a high school civics test should be much harder, by many orders of magnitude, especially if you are receiving some sweet, sweet AP credit for taking the course, but it is hard for us to argue that this test is a huge problem on its own. So, you go, Joe Foss Institute and gun range and friend of Dick Cheney and Oliver North, your patriotic impulse to test the civics of the high schoolers will not be dissed today by Wonkette, you are welcome.