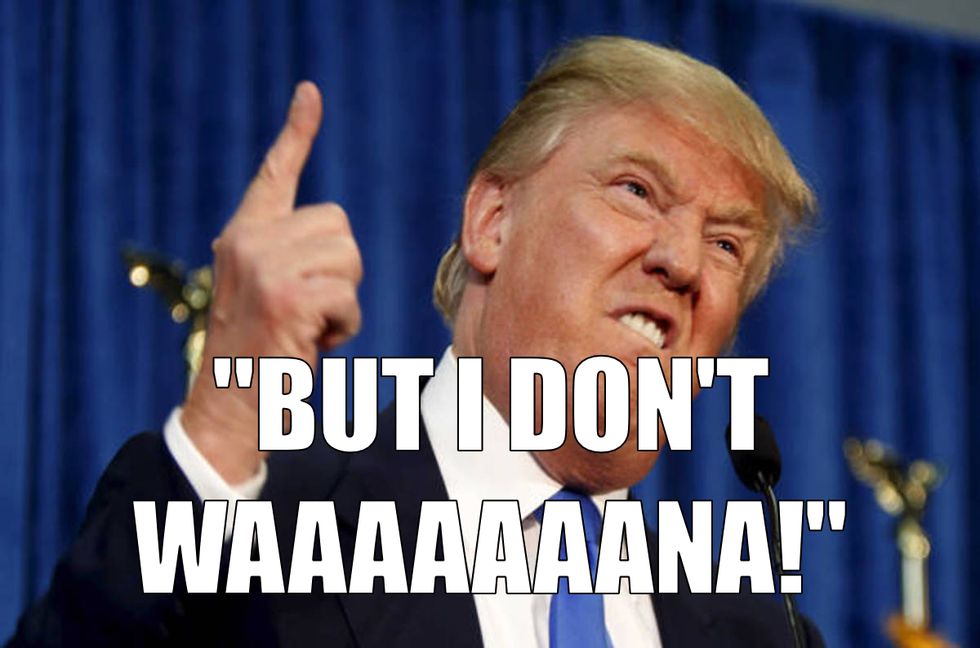 Another day, another tantrum from the illiterate Toddler in Chief. HOORAY! Time for us to blow up the Iran Nuclear Deal because it is BAD! TERRIBLE! An abomination worse than pineapple pizza!

Trump never spelled out his actual objections to the Joint Comprehensive Plan of Action -- we'd frankly be surprised if he even knows what JCPOA stands for. But The Black Guy signed it, so of course Donald Trump spent the entire campaign shouting to the rubes that it was a "disaster," "catastrophe," and "I've never seen something so incompetently negotiated."

Besides this. Or maybe this. Or these? No, those cannot be bad, we are sure.

Congressional Republicans mostly opposed the Iran deal because Hello, OBAMA! But they managed to furrow their brows and make words about the deal not forcing Iran to dial back its support for terrorist militants in Iraq, Lebanon, Syria and Yemen. Which is true, as far as it goes, but fails to acknowledge that tamping down the violence in the Middle East is a lot easier before Iran gets The Bomb than after. (See also: North Korea.)

As a final Fuck You to Barack Obama, Republican senators added a provision requiring the president to certify Iranian compliance with the bill every 90 days. Liddle' Bob Corker championed the 90-day recertification requirement as a poison pill, but now President Makin'Shit'Up calls him the Iran deal's Real Daddy. Because of course he does.

Bob Corker gave us the Iran Deal, & that's about it. We need HealthCare, we need Tax Cuts/Reform, we need people that can get the job done!