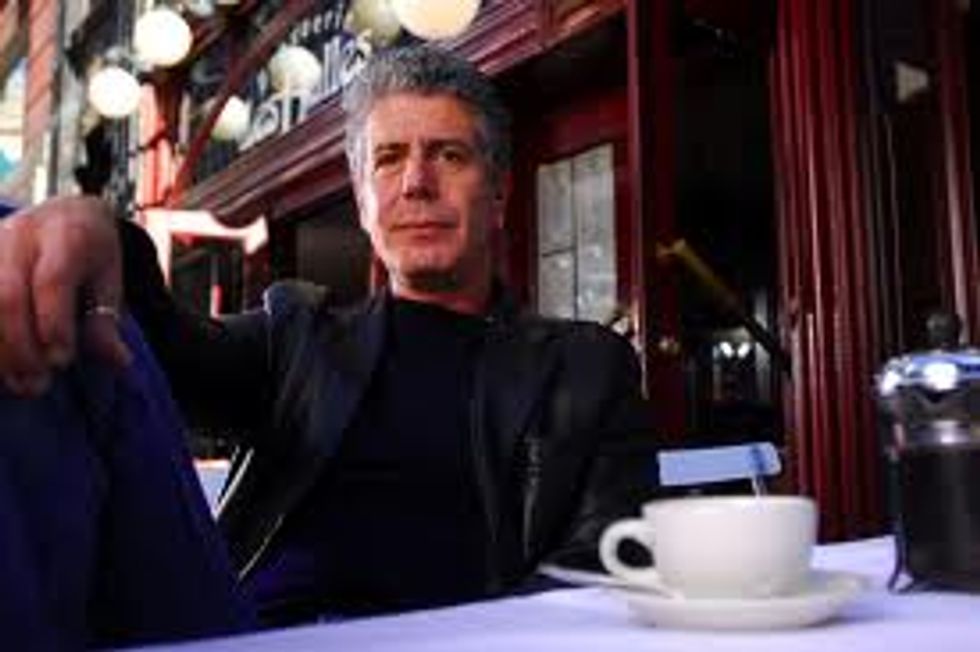 Man, bad boy cheftrotterTony Bourdain (your Editrix calls him "Tony" because of how he is her lover) will eat anything. There he always is, puking his way around Rangoon or whatever, eating turd hash on a salad of gravel and smiling wanly at his eager hosts. But what would he most like to eat? THE MOST DANGEROUS GAME, in this case one Mr. Richard "Dick" Cheney, and he is "the most dangerous" because of how he shoots people in the face (and also entire countries, you know how it is, you can't be the most powerful man in the world without breaking a few Iraqis). Wonkette operative SayItWithWookies sent us this HuffPo post, on eating Dick Cheney's wang*, so we could end our day with a smile! Thanks, SayItWithWookies, but not bloody likely.

So, easily impressed unnamed HuffPo writer, did Tony Bourdain say anything bad-boyish at this Great Cowabunga Festival Or Something Or Other?

He also had some rather practical thoughts on the subject on cannibalism. An audience member posed a bizarre hypothetical situation: if he and Bourdain were trapped in a cave, would Bourdain eat him? "F*ck yeah," Bourdain said without hesitation. He added that if they were trapped on a boat with a bunch of his chef friends and this guy wasn't pulling his weight, he would have no problem cooking him as a slow braise. Bourdain was asked straight up if he would eat a human. "Yes, yes, I f*cking would." It wouldn't be his first option though -- he'd eat a bag of Doritos first.

When someone later asked Bourdain which person he would most like to deep fry, he had a detailed idea. First, he would waterboard Dick Cheney. Then he would deep fry his head, f*ck him up the ass and then he'd cook him. Whoa.

*We originally read this post as Tony Bourdain frying and eating Dick Cheney's wang, which was INCORRECT. No, he would fry his skull -- better for fucking! -- before shoving it up his ass. We regret that Mr. Bourdain erred. [HuffPo]