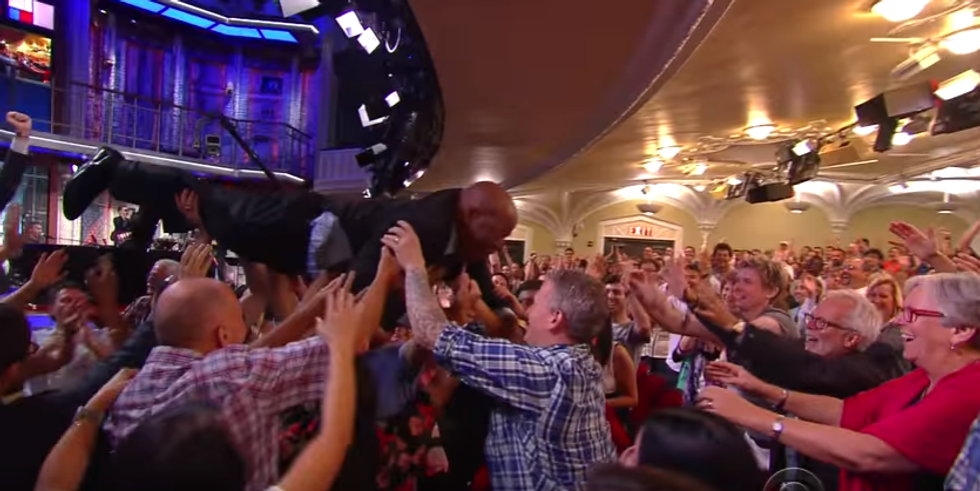 We like to end our days with fun little Nice Time things, so you can chit-chat with each other until way past bedtime in the comments, like you always do. And you may have seen this wonderful video in this morning's Wonkagenda, but if you were still snoozing and didn't see it, that is OK because Civil Rights hero Rep. John Lewis crowd-surfing on the Stephen Colbert Late Night Giggles Hour is awesome enough to get its own post.

The crowd-surfing part starts about seven and a half minutes in, but you should watch the whole interview, because it's lovely. They talk about the fuckin' amazing sit-in Lewis led in support of gun control, and Lewis said the thing that's become sort of his catchphrase, about how sometimes you have to make "good trouble" to make real progress.

Speaking of getting in trouble for the sake of something you believe in, wonder what Lewis thinks of Colin Kaepernick?

Guess that settles that!

They also talked about the final installment of Lewis's March trilogy, a series of graphic novels he wrote to bring the story his role in the Civil Rights movement to life. Buy it for your lover friend for "The Holidays"!

And then Lewis crowd-surfed, and everything in the world was wonderful, if for just that moment.