Badass Civil Rights Hero Rep. John Lewis Will Lead Us Out Of This Awful Week 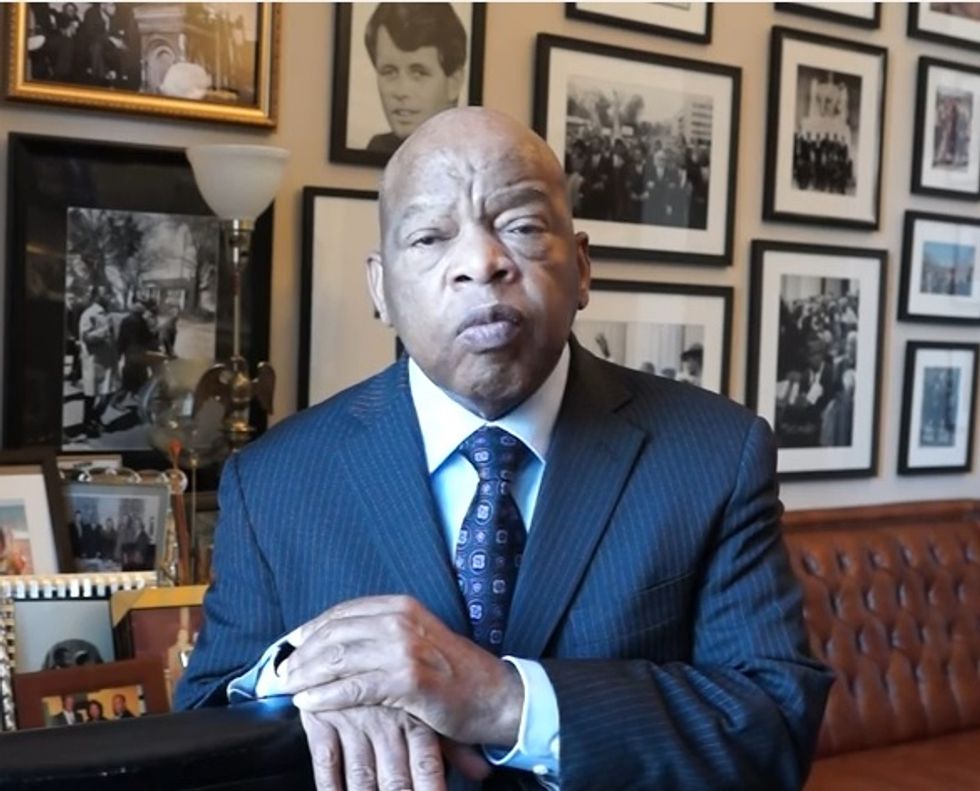 Well here we are on a Friday, closing out another awful week of inexcusable violence and death. Should we just get in bed for the next three or fifteen days, pull the covers over our heads and snuggle with a bottle of whiskey? Eh, maybe, but civil rights hero John Lewis, the Democratic congressman from Georgia, would rather you kick it into gear, get your hands dirty and start making some #GoodTrouble, so we can make a change in this country.

[wonkbar]<a href="http://wonkette.com/603268/badass-democrats-will-sit-on-house-floor-until-gop-does-something-anything-about-guns"></a>[/wonkbar]Lewis has been kicking ass his whole life, from his work in the Civil Rights movement, when he was beaten and attacked by police during the Selma to Montgomery march, up to just a few weeks ago, as he led the House Democrats' sit-in demanding action on gun control.

And as the events of this week have unfolded -- Alton Sterling and Philando Castile killed by police, five police officers slaughtered by a sniper in Dallas -- Lewis has been inspiring and holding court on Twitter, sharing the wisdom he's gleaned from his years.

These are just from today, Friday, June 8, 2016, in their order of being tweetered:

AW NUTS HE SAID "GUNS"! TOO SOON, TOO SOON! Just kidding, guns are a fucking problem and that's just how it is. #FuckinDealWithIt

Speaking of dealing with it:

Wow. That's quite a prescription for America, we think. We've gotta learn to love each other, live with each other, do a goddamned thing or two about the fact that any murderous psycho can get a gun in our society, confront racism head-on, care enough about cops to approach them as partners in dealing with these problems and get off our fucking asses and march, nonviolently and with purpose.

You'll want to check his Twitter to see if he's still teaching, as those are just the things he's said so far on Friday.

But as we said, he's been sharing wisdom all week. Here are a few more insights from the good congressman:

[wonkbar]<a href="http://wonkette.com/600283/breaking-beyonce-does-not-want-to-murder-all-cops"></a>[/wonkbar]A good question, and a solid #truth. Remember what we've been saying about how one can both believe that Black Lives Matter, and also respect and honor the many good cops who put their lives on the line for us every day? They're not mutually exclusive, despite what racist wingnuts and also too Beyoncé might have us believe. (WE ARE KIDDING, Beyoncé is actually not a cop-hater! By the way, she posted a pretty powerful letter of her own, after the deaths of Alton Sterling and Philando Castile. You should read it.)

Oh screw it, not even John Lewis can top that John Lewis tweet, so thus endeth the lesson.

As you go out into your weekend, after this awful week, do what John Lewis and Dr. King said, and love the living hell out of people, OK?