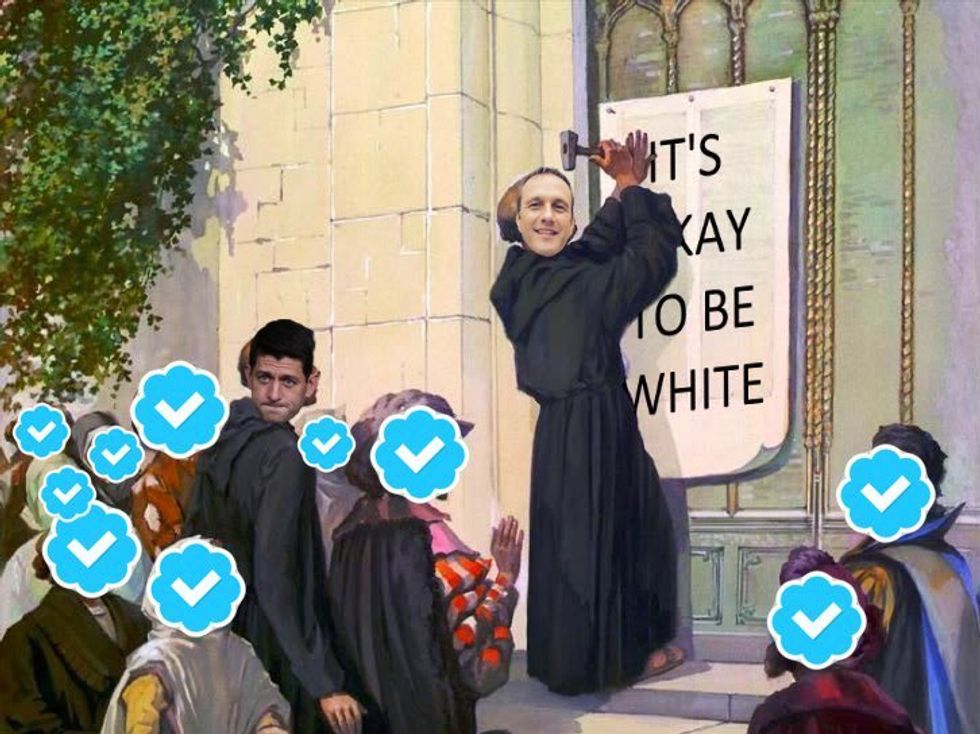 You guys, we are starting to think Steve Bannon isn't such a political wunderkind after all! Sure he looks the part of a tortured genius, with his bloodshot eyes and three button-down shirts at once. But maybe the guy who led the GOP charge to lose a Senate seat in Alabama is actually ...

Now just hear us out for a minute. In 2016, Breitbart was all in for Paul Ryan's primary challenger Paul Nehlen. You may remember Nehlen from his 2016 breakout album The Jews Control Global Finance, So Let's Deport All the Muslims.

NEHLEN: Well, then, the question is why do we have Muslims in the country? How can you possibly vet someone who lies?

HOST: Well, then, are you suggesting that we deport all of the Muslims in this country?

NEHLEN: I’m suggesting we have a discussion about it, that’s for sure.

Ain't he a peach! Nehlen is your standard issue neo-Nazi in a tie. He loves Jesus and guns, hates Muslims, and knows Jews aren't white. He's a Red Pill dipshit who retweets "Chad" memes and thinks Antifa is a real thing. You know, A MORON.

Which is why he got his ass handed to him in 2016, even with the assist from 30 Breitbart articles.

Only 68%, SO CLOSE! It takes a real political genius to look at those numbers and think, "This kid has what it takes!" Naturally, Bannon and the howler monkeys at Dead Breitbart's Home for People Who Never Got Over Getting Stuffed in a Locker are putting all their chips on Nehlen again.

Hell, maybe the rumors that Ryan is going to retire next year are true, and it will be a wide open field for Nehlen. There's just one problem, though.

Not to get too technical, but Nehlen is a fucking lunatic. If Ryan really does retire, then this Hitler Youth reject may actually replicate Roy Moore's Montgomery Miracle and turn Wisconsin's First Congressional District blue. He's just that crazy! Whether it's telling John Podhoretz to "eat a bullet," accusing John Cardillo of shilling for "sheckles" [sic, and teehee], or joking about a good, old fashioned curb-stomping, Nehlen has what it takes to turn a safe red seat blue.

(Do you know what a "curb-stomping" is? It is when you put your enemy's head on a street curb, face-down with his mouth open on it, and then you jump on the back of his head! Nazis love curb-stomping so much, they could do it in slo-mo to the jazz version of My Favorite Things!)

The District's not even that red to begin with -- only a 5% advantage. Totally doable with Nehlen on the Republican ticket.

Maybe Bannon just sees things you and I are blind to. He's playing nine-dimensional chess, which is why he invited Nehlen to speak at a Roy Moore rally last month. He knows that a guy who retweets antisemitic texts will have broad appeal in a place that has in the recent past elected both a Jew and a lesbian to the Senate.

That Bannon, he's a genius alright! OR, he was standing there when Russian lightning struck and now he thinks he has the gift of fire. Could be that one, too.

And he's a gross lady-hater, too? Clutch the pearls!

Godspeed, IronStache. Time to kick that little Nazi in the nards WITH VOTES.

UPDATE: Oh, noes! It seems that the fine Americans at Breitbart just realized that Paul Nehlen's views may be just a hair over the line.

Some news: Bannon and Breitbart have cut ties with Paul Nehlen. A Bannon advisor told me that the far-right Paul Ryan challenger is "dead to us." His author page has been scrubbed from Breitbart. https://t.co/tmr3wM6bL8