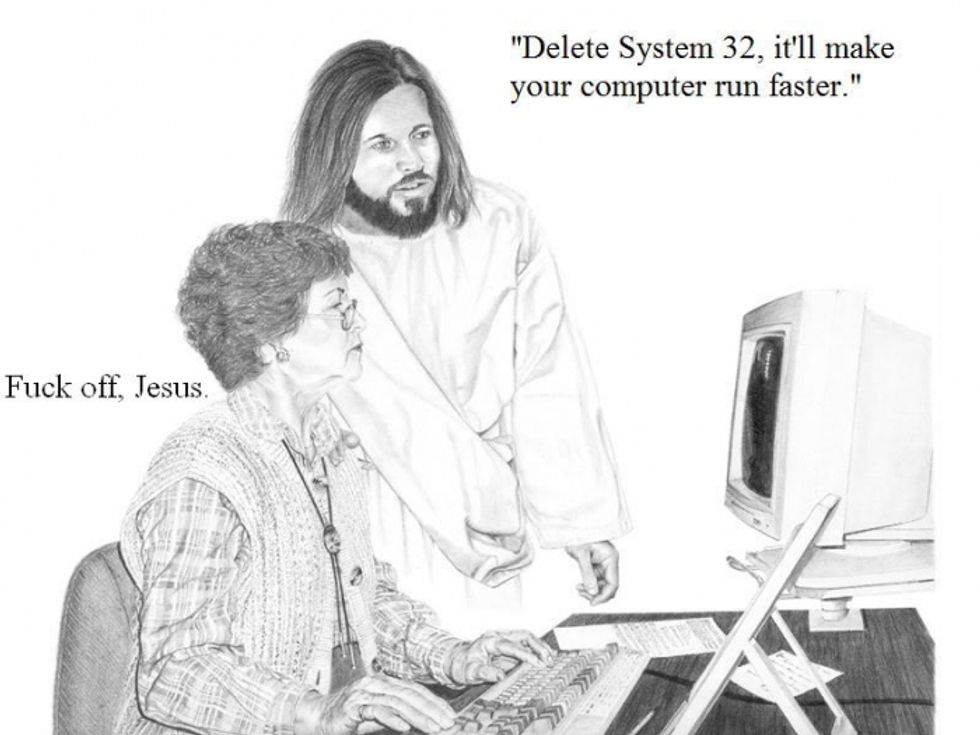 There's a certain kind of rightwing creativity that comes into play when government tries to make bigots not behave like complete bigots to everyone, like when cities all over Virginia just shut down their school systems rather than integrate, or more recently, when several counties in Florida announced that they just won't marry anyone at their courthouses, straight or gay, so it's equal, all right? Well, they're at it again. The Southern Baptists have written a manual explaining to churches how they can get away with all the discriminating they want: just make everyone who works for you a minister, and then you can fire them without worrying about troublesome lawsuits!

You see, the Southern Baptist Convention simply wants to be free of the tyranny of "cultural harassment, intimidation, and even legal punishment for those whose consciences are held captive to the Scripture’s teaching on God’s purpose for marriage and sexuality,” in the words of the SBC’s Ethics and Religious Liberty Commission president Russell Moore. So to protect churches from burdensome antidiscrimination laws that say you can't fire someone just for being gay, the SBC and the anti-gay legal eagles of the Alliance Defending Freedom (every day is Backwards Day for fundamentalist bigots) have collaborated on a handy manual called Protecting Your Ministry From Sexual Orientation / Gender Identity Lawsuits, available as a free download. It's just packed with good advice about having formal membership policies and admissions procedures for church schools that will screen out the Wrong Sort of Parents (who do it in the butt), so as to "interrupt or terminate the admissions process if the school receives an application evidencing a lifestyle or belief system inconsistent with the school’s religious beliefs or mission.”

The genius recommendation to make everybody a minister relies on a very selective reading of the 2012 Supreme Court decision in Hosanna-Tabor Evangelical Lutheran Church v. EEOC, which held that a church was free to fire a teacher with disabilities because she also had some ministerial duties, creating a carve-out from annoying distractions like the Americans with Disabilities Act and other civil rights laws. If the First Amendment really guarantees religious freedom, then churches need to be free to make whatever shitty hiring decisions they want when it comes to their ministers, and since the teacher did also do some ministerial work, she couldn't sue for discrimination.

So Protecting Your Ministry seizes on the Hosanna-Tabor decision and urges churches to assign some "ministerial duties" to every employee possible, from receptionists to groundskeepers to janitors:

Very clever! Require the church's accountant to conduct an occasional Sunday School class on why the parable of the Talents justifies getting rich in the stock market, and WAH-LAH!, she's now the Right Reverend Beancounter. As Think Progress explains, once this job-title Transubstantiation has taken place, "the janitor is now a 'minister' and the employer is free to fire that janitor because they are black, because they are gay, or because they are a woman." But mostly because they're gay, because most churches have resigned themselves to the inconvenient fact that blacks and women aren't going away any time soon.

Of course, this might not hold up in court; to say the least, it's a really creative reading of the decision in Hosanna-Tabor, where the teacher, Cheryl Perich, actually had a significant amount of ministerial training and taught religion classes as well as her other subjects. So while her main job was teaching grade-school subjects that were mostly secular, she also had significant religious duties going well beyond leading an occasional prayer.

Also, too, as Think Progress points out:

There was also no evidence that Perich’s employer gave her these duties in order to trick the courts into exempting her from civil rights laws.

Indeed, the most surprising aspect of the Protecting Your Ministry manual may not be the fact that it pushes such an aggressive effort to neutralize anti-discrimination laws. The most surprising thing about the manual is that it is available online in a place where any lay person, civil rights lawyer, or reporter for a progressive news outlet can download it. Judges typically do not look kindly upon litigants who try to game the law by assigning superfluous duties to their employees in an effort to fool the courts into believing those employees are something that they are not. And employers who follow the manual’s advice may find themselves in hot water once opposing counsel introduces the manual’s advice for employers seeking to circumvent civil rights law into evidence.

Needless to say, we can hardly wait to see how the courts treat any churches that actually try to say that they were free to fire a pastor/janitor for being gay, because after all, he had led a prayer a couple of times, not to mention all the times he'd called out to Jesus when he saw what a mess the men's room was.