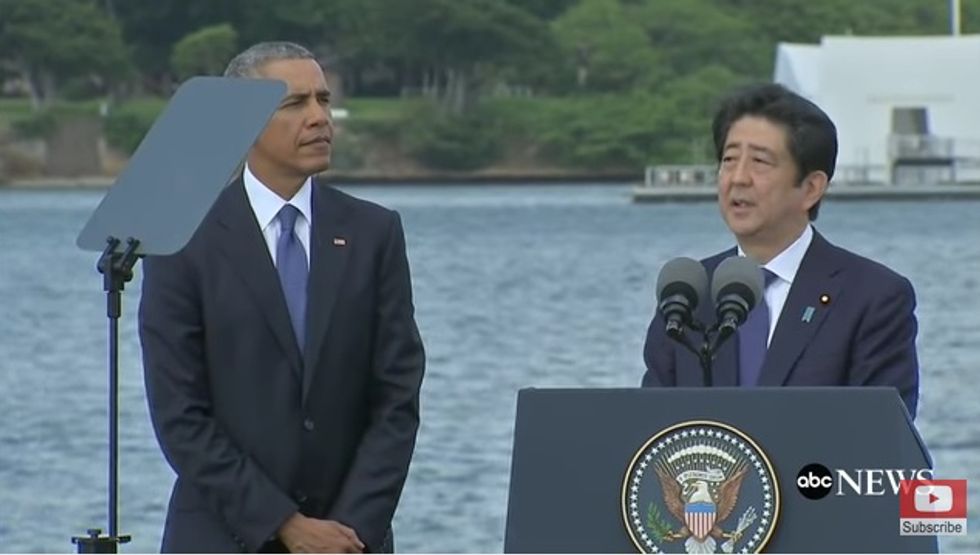 In what has been a terrible year, it's worth noting that 2016 also brought us a pair of remarkable, parallel firsts: Back in May, Barack Obama became the first serving U.S. president ever to visit Hiroshima, and yesterday, Shinzo Abe became the first Japanese prime minister to make an official visit to the USS Arizona Memorial at Pearl Harbor. Both leaders spoke about war, loss, and reconciliation, and the fact that two countries that fought one of the world's most brutal wars have become close partners. In May, Obama spoke of the moral reimagining necessary to avoid nuclear war, saying, "above all, we must reimagine our connection to one another as members of one human race." At Pearl Harbor, Abe reiterated a central pledge of Japan's postwar constitution, that his nation would never again engage in war.

my sincere and everlasting condolences to the souls of those who lost their lives here, as well as to the spirits of all the brave men and women whose lives were taken by a war that commenced in this very place, and also to the souls of the countless innocent people who became victims of the war.

We must never repeat the horrors of war again.

Abe went beyond the usual generalities of speechmaking about peace, and offered thoughts about the horror experienced by the victims of the attack:

Listening again as I focus my senses, alongside the song of the breeze and the rumble of the rolling waves, I can almost discern the voices of those crewmen.

Voices of lively conversations, upbeat and at ease, on that day, on a Sunday morning.

Voices of young servicemen talking to each other about their futures and dreams.

Voices calling out the names of loved ones in their very final moments.

Voices praying for the happiness of children still unborn.

Each and every one of those servicemen had a mother and a father anxious about his safety.

Many had wives and girlfriends they loved. And many must have had children they would have loved to watch grow up.

All of that was brought to an end. When I contemplate that solemn reality, I am rendered entirely speechless.

“Rest in peace, precious souls of the fallen.”

With that sentiment, I cast flowers on behalf of Japanese people, upon the waters where those sailors and marines sleep.

They were the kinds of images any American politician's speech might use, and that was the point: to emphasize how both countries have exchanged wartime hatred for appreciation of their common humanity.

Obama's Pearl Harbor speech also began by remembering particular Americans and their bravery during the battle, before moving on to the lessons of the war and the alliance that grew out of its aftermath. Then President Obama returned to a theme he had expressed in Hiroshima:

Wars can end. The most bitter of adversaries can become the strongest of allies. The fruits of peace always outweigh the plunder of war. This is the enduring truth of this hallowed harbor. It is here that we remember that, even when hatred burns hottest, even when the tug of tribalism is at its most primal, we must resist the urge to turn inward. We must resist the urge to demonize those who are different.

While it would be every bit as true and appropriate in any circumstances, we have to think the text was also crafted, at least partly, with the president-elect in mind: Let's not be too quick to throw our humanity aside for the sake of revenge, or out of a desire to reduce an entire people to something less than human in our minds. Doing that makes it far too easy to wish to reduce an entire people to ashes, to wage war indiscriminately, to call for, let's say, the internment of all Japanese-Americans, or the banning of all Muslims from entering the U.S.

The sacrifice made here, the anguish of war, reminds us to seek the divine spark that is common to all humanity. It insists that we strive to be what our Japanese friends call "otagai no tame ni" -- "with, and for each other."

Similarly, Abe's invoking Japan's constitutional commitment to never wage war again is largely what you'd expect of any Japanese prime minister's speech at a war memorial, but may also have been a reminder to the next American president that, no thank you, Japan is not interested in building its very own nuclear weapons, and maybe we shouldn't be talking too casually about how much fun a new nuclear arms race might be.

Almost all of the reporting on the visit of Abe and Obama to the Arizona memorial pointed out that, with only 24 days left in his administration, this is likely to be among President Obama's final in-person meetings with a foreign head of state. There's a thought to add a shudder to how we think about these two leaders speaking of peace at the site where a terrible war began.