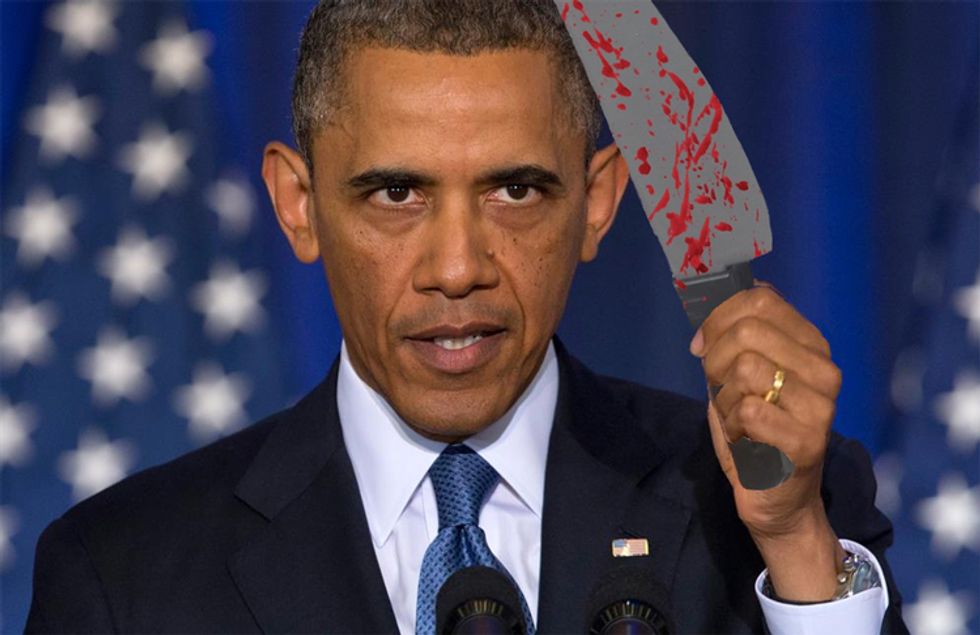 You may remember that last summer, Obama's cabal of Education Department goons went after esteemed for-profit Corinthian Colleges, targeting them for the unspeakable crime of being too awesome and making too much money. Sure, the USDE said it was because Corinthian kept juking its job placement stats to entice more students to enroll in its dead-end programs that turn out students who can't ever pay back their federal loans, but we know it's because the socialist Kenyan occupying the White House hates freedom and money. On Monday, the forces of evil won and Corinthian shuttered all its colleges nationwide.

Sure, a metric fuckton of students who were already receiving a sub- to no-par education are out on their ears mid-degree, but let's face it: the real loser here is us, the American people, because we let our elected officials kill a money-making machine like Corinthian.

For-profit education company Corinthian Colleges announced that, effective today, it is shutting down all of its 28 remaining campuses. That will mean no more classes for approximately 16,000 students attending Corinthian's various trade schools, including the 150-year-old Heald College. It also means the end of a long collapse for a once-hot company.

The stock, which once traded around $33 a share, is now worth less than $0.02. Corinthian stock peaked in March 2004, but then quickly nosedived after a report that the colleges may have participated in some improper financial aid dealings.

See? Had Obama and the impoverished and jealous career bureaucrats at the USDE only left well enough alone, Corinthian Colleges would still be churning out money for its stockholders at the expense of students, just like God intended. Instead, Obama and California's Attorney General Kamala Harris literally murdered Corinthian in the billiards room with a revolver.

On April 27, The Wall Street Journal editorial board defended Corinthian, claiming that the "feds and [California Attorney General] Kamala Harris put 16,000 students on the street." The editorial alleged that the Department of Education (ED) "began to drive Corinthian out of business by choking off federal student aid," that Corinthian was held at "government gunpoint," and that an ED "penalty scared away prospective buyers."

What will the the CEO of Corinthian do now that he won't pull down $3 million-plus a year? What will the many marketing-related entities that sucked at the teat of Corinthian to the tune of $294 million dollars do without that money? Why wasn't someone thinking of the real-world damage done when you take vast sums of money away from people who earned it honestly -- by dicking over under-informed students?

Oh wait. You know who was thinking of that and striving to protect the all-American goodness that was Corinthian? Our hero, Marco Rubio. Yes, the good senator from Florida with a thirst for justice (and also for actual water) stood athwart Corinthian yelling STOP.

Last summer, Senator Marco Rubio of Florida asked the U.S. Department of Education to "demonstrate leniency" toward Corinthian Colleges by permitting the wealthy for-profit company to continue accessing millions of dollars in federal financial aid while it was cooperating with a federal investigation.

Golly. How do we get a senator to ask the government to demonstrate leniency toward us by permitting us access to gobs of sweet sweet federal cash? This is a definition of "leniency" we were hitherto unaware of but man, now we want a piece of that action. And to think that Corinthian got all that lovin' from Marco for a mere $5,000 donation to Rubio's Reclaim America PAC. Surely we can combine the efforts of Wonkette's not-yet-but-soon-to-be-Twitchy-sized army of overpaid and overfed employees and you, our precious commenters, to raise five large so that we too can enjoy the dulcet dry-mouth tones of Marco Rubio encouraging the government to keep showering us with cash. After all, isn't that what the New American Century is all about?