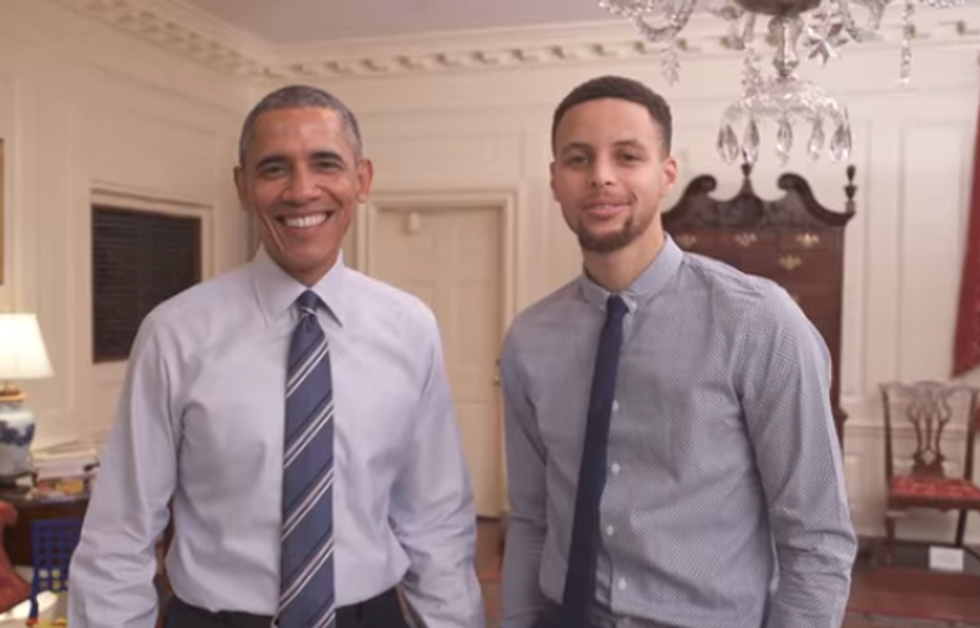 Steph Curry, are you aware of him? He is basically the most incredible basketball player alive and if you are a fan of the Sport Of Hoops, this makes you either love him or hate him (or both). Like when his Golden State Warriors are breaking NBA records against your Memphis Grizzlies, you hate him, but you also respect him because damn, son, he is GOOD.

He's also sexy. Know who else is sexy? Barry Bamz Obama is who. And here is a video of them being all cute TOGETHER. You see, it is a PSA for My Brother's Keeper, which Esquire explains is "Obama's initiative to connect young people with mentors in their community." That's nice!

First, Barry helps Steph with his resume, which is all "I AM GOOD AT SPORTS" and also one time he babysat for the Obama dogs.

Then it was time to teach Steph how to play a very difficult game called "Connect Four," where you try to get four in a row, why are we even trying to explain this to you? You wouldn't understand.

Ooh, look at Mr. President's "Strategery" face! It must have worked, because here is Obama dancing after he winned the Connect Four, take THAT Steph Curry.

Good dancing, Mom Jeans! But it wasn't all fun and games. Next up, Barry sat Steph down on the couch and read HIS ENTIRE BOOK he wrote, to Steph!

OK so now Steph Curry has been mentored in resumes, Connect Four and Obama's life story. Obviously it's time to teach the young man how basketball is really played.

Good try, Steph Curry! You will get the hang of it!

Finally, Obama taught Steph how to make a Science Volcano, and they agreed that they had just done some legitimate science:

And then they had a sleepover and ate all the pizza and stayed up way past their bedtimes talking about girls, the end.