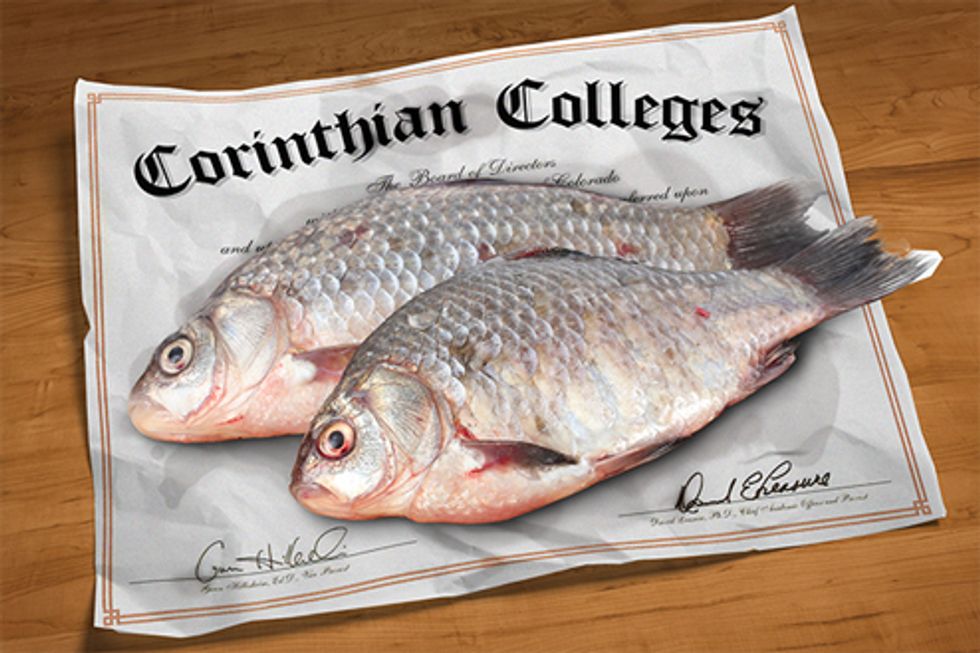 Damn that Barack Obama and his relentless destruction of free enterprise -- he's gone and done it again, this time killing off a fine little for-profit college that had done nothing wrong at all except for not actually teaching students much of anything, charging through the nose for its classes, and not responding to lawful federal requests for data on whether its graduates actually got jobs in the fields it "trained" them for. Eric Owens at the Daily Caller has theshocking story of big government out of control:

Under President Barack Obama, the Department of Education has been making corporate existence very hard for for-profit colleges.

The hard-hitting regulation strategy has now claimed a major scalp. This week, Corinthian Colleges, one of the largest post-secondary education companies in North America, officially announced that it is bidding goodbye to the world.

What's so beautiful about this is that after proclaiming that the Obama administration just wants to stone cold murder the for-profit college sector, the rest of the story is just one detail after another of what a terrible school (and business) Corinthian was. Yr. Doktor Zoom has taught at a for-profit school -- not proud of it, but we were only following lesson plans -- and Corinthian makes the place we worked at seem like Sunnyvale Hi-Quality Community College by comparison.

For what it's worth, there aren't actually any schools with the name "Corinthian College;" instead it operates schools under the names Everest, Heald, and WyoTech.

Working himself into a rich Corinthian lather, Owens cries that "Over 70,000 students enrolled at branch campuses across North America will be affected," but then, multiple paragraphs later, also mentions that

Corinthian’s executives and Education Department officials worked out a deal to allow the dying for-profit company to serve enrolled students who want to stick around to finish their degrees.

And what was the cause of Corinthian's downfall? oh, just a history of getting roughly 80% of its revenue from federal financial aid programs, lying about employment rates for its grads, charging much higher tuition even than other for-profit schools, a high dropout rate (leaving students with huge loans and no degree), high-pressure sales tactics, that sort of thing. After suggesting that the Obama administration was out to "scalp" for-profit schools, Owens sort of undercuts the notion that Corinthian was an innocent victim by noting that in 2009, the company "spent $294.7 million for marketing purposes and dedicated $119.2 million to profit" and that the CEO got $3.3 million in compensation, compared to the relatively modest $382,980 pay for the president of the University of California at Irvine in the same year.

And what dirty trick did the Obama administration finally use to kill off this fine academic institution? Those monsters at the Department of Education actually enforced regulations designed to keep for-profit schools accountable, if you can believe that:

Corinthian’s immediate problems began in January when officials from the Education Department requested in-depth information about individual Corinthian students including their attendance records, the jobs they ended up getting and their Social Security numbers.

Federal officials sought the information to investigate whether the for-profit college group was abiding by regulations connecting federal aid money to various measurable outcomes for students and graduates.

Good god, it sounds like a witch hunt all right! And then, just like the oppressive partisans at the IRS, the Education bureaucrats manipulated the data to make Corinthian look bad, right?

For reasons that are unclear, Corinthian failed to respond to the records request to the satisfaction of Education Department officials. The bureaucrats responded by holding Corinthian’s federal aid funding for 21 days. This hold, coupled with lower enrollment and already-existing financial issues, caused a huge cash flow problem.

And thus did Corinthian Colleges rather quickly go kaput.

Those federal bastards! The company failed to respond -- and they probably had a perfectly good reason -- and just like that, their funding dries up! It's exactly like the time we failed to renew our car registration and then got a ticket for it from a jackbooted local cop.

So there you have it: Obama hates free enterprise, and he killed Corinthian Colleges because he could.