Barack Obama Signs Up For Obamacare, Arrogantly No Doubt 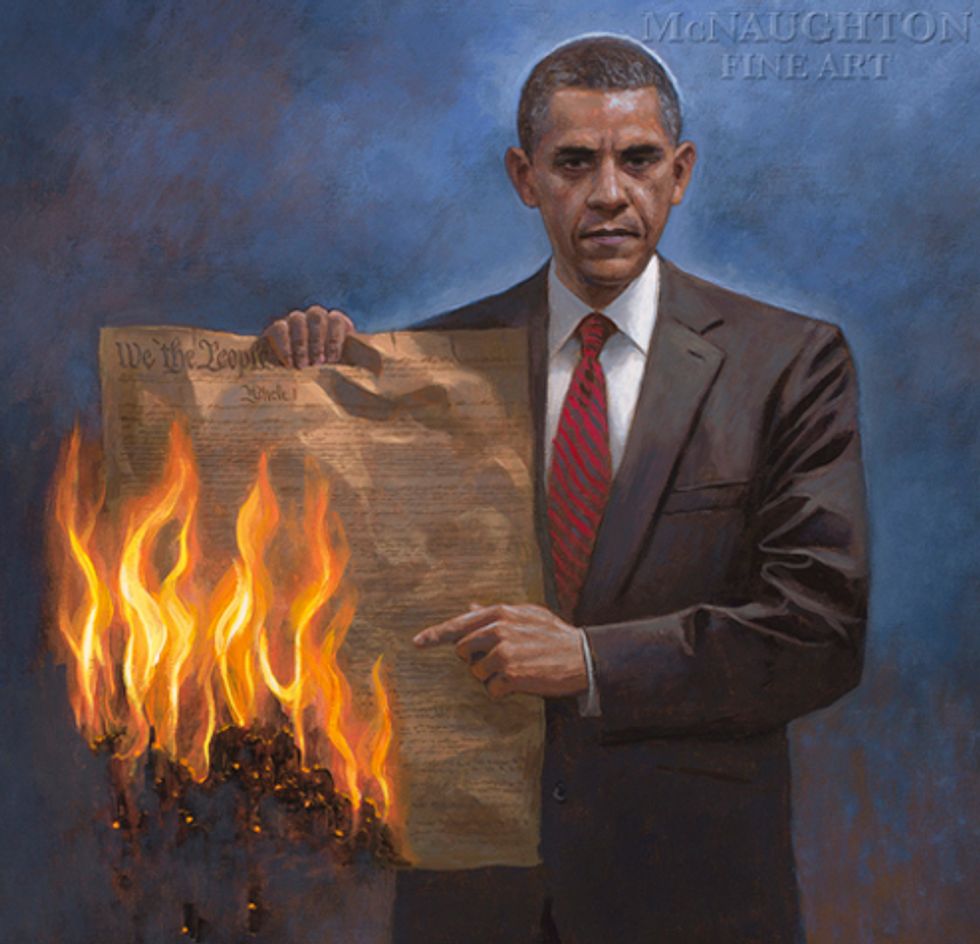 Barack Obama signed up for a purely-for-the-symbolism health insurance policy under the Affordable Care Act, earning some tut-tutting fromthe Blaze:"Look Who’s Reportedly Signing up for Obamacare on the Last Day Possible." (The Blaze later added an update that explained that he had actually signed up over the weekend, but left the story largely intact, because hey, lazy President still waited til the last minute, just like some Wonkette blogger or something. Also, too, the White House allowed one extra day for people to finish signing up, because it has no respect for the Rule Of Law.

The President's purchase of a "bronze" insurance plan on the DC exchange is purely symbolic, since he and his family will continue to receive their healthcare from the US Military, just like Marie Antoinette and Hitler did.

Obama's premium will be $400 monthly for a policy covering just himself, and he will pay it in full, although his salary comes from the U.S. Taxpayers, so we are still subsidizing his lavish lifestyle of purchasing insurance he won't even use. Ben Shapiro's TruthinessRevolt noted that Obama had selected the "cheapest plan" that provides the "lowest amount of coverage," which, considering that thing with his healthcare really being provided by the military, could perhaps be seen as commendable frugality, but instead is stinginess. If only he'd gotten a silver or gold plan, so he could have been mocked for frittering away money on insurance he won't even use! And what's this "affordable" stuff anyway? Why, if the whole Obama family were covered, their entire cost for a month would be $1,161 with a total annual cost of $20,125!! This is supposed to be outrageous, although, of course, the Obamas' total income is $608,000, which means they'll probably get by just fine -- and a family with much lower income would qualify for subsidies. Still, it's outrageous. Outrageous! Shapiro also believes that allowing more time to sign up is somehow both dictatorial and condescending:

In a further insult to ordinary Americans, the Kenyan Usurper did not go on the website himself, but instead had staff do it in person -- we hear it was his footman, or possibly one of Bo's 28 dog-walkers, who will fly the policy papers to Obama in Hawaii in a gold-plated 747 paid for with taxes on Duck Dynasty viewers.

An unidentified government official explained that

"Like some Americans, the complicated nature of the president’s case required an in-person sign-up ... As you’d expect, the president’s personal information is not readily available in the variety of government databases HealthCare.gov uses to verify identities.”

Likely story -- it probably has something to do with his birth certificate, or one of the seven different Social Security numbers he uses. And when are we going to see his college transcripts, huh? Thanks a lot, Obama!

Follow Doktor Zoom on Twitter. He promises to hold your hand on the way to the death panel.