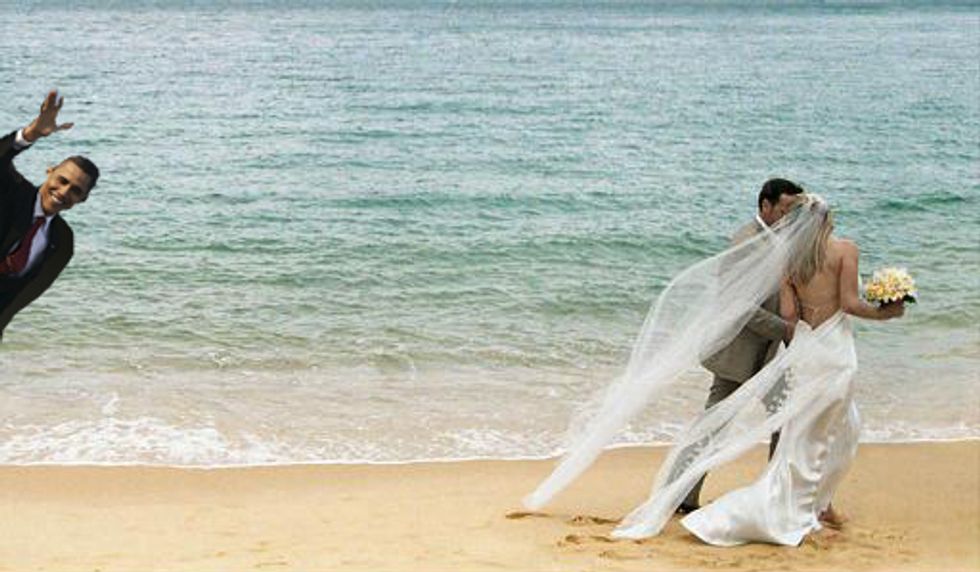 President Obama, that is his name, has come up with a brilliant new way to try to beat his opponent Mitt Romney at money-making, despite the fact that they seem to have more money than anyone would need to do anything, except maybe buy a Hawaiian island!!!!!! Isn't it strange that we have to pay people to prepare themselves to run the country for a relatively short time? Anyway, Obama is now suggesting that if you have a wedding, birth, or anniversary, or any old excuse for wanting your friends and family to pool together their unemployment and social security checks and buy you shit, instead of asking for Le Creuset pots and diapers and wine, why don't you just give the money to Barack Obama instead?

Yes, sorry, that's really all there is to it. Here's the official suggestion from the Barack Obama website:

Have I stumbled onto a comedy site?

I smell the smoke of desperation here guys. Seriousl, don't you find this idea a tad arrogant? However, it is great blog material. Thanks.

IT IS GREAT BLOG MATERIAL!

What a freaking joke... In lieu of birthday, graduation, wedding gifts, etc., make a donation to Barack Obama's campaign in my name? This is the most absurd thing to come out of his mind to date. What a bunch of ignorant arrogant douch-bags. Sorry to offend real douch-bags but this idiocracy has got to stop.

Oh my God! When is this amateurs hour going to be over with?

What's next?....should we ask friends and family to send donations to Obama in lieu of bereavement gifts? This is an embarrassment.

WELL! This all brings up a good point. If you are so desperate for the money, so focused on the dollar signs, maybe you will forget that people actually have to like you in order to give you money, and if you ask for money in disgusting, clueless ways, maybe the people will not like you, and then not even give you money when you ask for it in normal, cool ways! Just an idea. [Weasel Zippers]