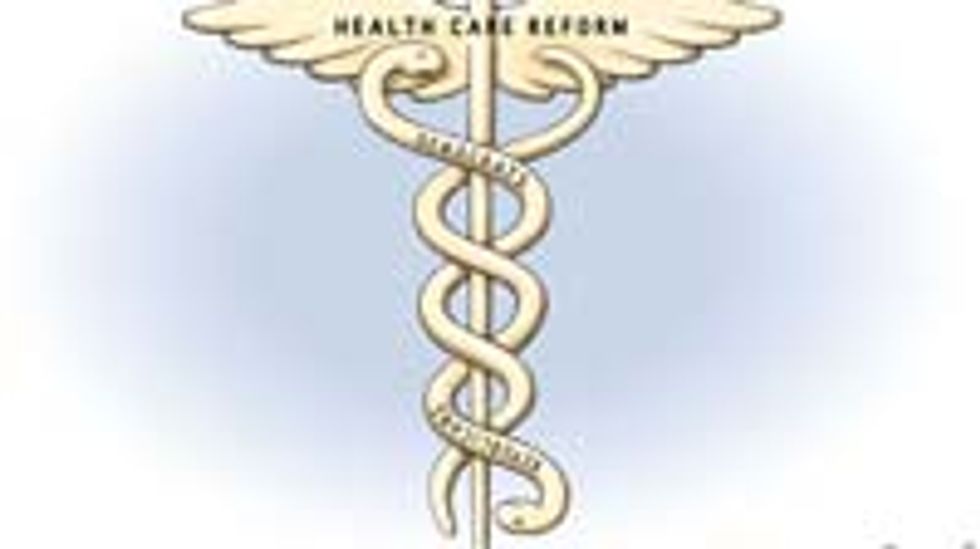 By the Comics Curmudgeon
Hey, everybody, did you hear about the Health Care? Health Care is a very important issue facing us all today, and Obama has promised to Do Something about the Health Care? There is one slight problem with this: Health Care is very, very complicated, and any configuration of it is pretty much terrifying, so nobody really understands what the deal is with the proposed Health Care Reforms (or, really, what the deal is with the current un-Reformed Health Care that we have now). How, then, are America's great communicators, the political cartoonists, supposed to explain Health Care to you, the mouth-breathing masses? Well, if the following cartoons are any indication, they will do so with murder, hideous mutants, and anal sex. OH MY GOD IS THIS WHAT WONKETTE HAS DONE TO AMERICAN DISCOURSE? DAVID DENBY WAS RIGHT!

Click on each image to observe the horror in close-up.

Like any medical procedure that will eventually be used on humans, Health Care must first be tested on animals! The first thing that Obama's Health Care geniuses noticed was that humans -- indeed, most biological life forms -- were fleshy and weak, prone to injury if bludgeoned or shot with even low-caliber ammunition. Fortunately, the U.S. government had just acquired millions of hideously ugly and poorly designed metal car bodies, which were just lying around the place over at GM. What if each American citizen could be fitted with a car chassis, protecting him or her from the elements? GM could stop paying so much for warehousing costs and Americans would need much less expensive medical treatment -- win-win! Or so they thought before they tried it out on horses. The resulting terrifying car-horse monsters were forced down into a pit so that decent people would never have to see them.

So, the administration decided to go down a more conventional route when it came to Health Care: President Obama would cram a latex-coated, finger-mounted dildo up America's ass. But Americans seemed reticent to be stimulated anally -- particularly Republicans, to the shock of most seasoned political observers. "No," America said firmly, "I do not wish you to put your huge, throbbing finger up my butt, President Obama! Respect my autonomy in this matter!" And, just as is the case with individual Americans who refuse to let doctors put fingers up their butts, the result is that America will eventually die, of colon cancer.

"All right, fine," said Obama, who like all liberals is always up for wishy-washy compromise. "What if instead of forcing my finger up your butthole, I just visited everyone's home on an annual basis and sort gave your anus a once-over from a respectful distance? This is a new, less invasive form of Health Care, thanks to electronic medical records that tell me what your anus used to look like." However, this proposal also ran into resistance: it included an unfunded mandate that everyone put holes in their beds and bedroom floor to give the president access, and some whispered that the plan had been bought and paid for by Ikea, which would sell millions of its PörthØle-brand beds across the nation.

What exactly in the Congress could be holding up the Health Care, keeping it from coming to fruition? Eventually, Obama administration handlers went up there to find out. They were horrified to discover the Kennedy Health Care plan had been locked in a car that was weighed down with huge amounts of money, then thrown into a river, where Health Care drowned a horrible death, while Ted Kennedy fled in terror. Does this scenario sound FAMILIAR to anyone, hmmm? That's right, it's like every other Health Care initiative that's gone through Congress!

But where is The Left while all this is going on? It's well known that the only thing The Left likes more than setting terrorists free to kill again is Health Care! (That's why they're always threatening to move to Canada, for the Health Care.) But this key Health Care constituency was distracted at a crucial moment, because it turns out that there's something The Left likes even more Health Care and terrorist-freeing, and that's seeing terrible sexist comedians mock the teenage daughters of Sarah Palin! When The Left should have been pressing for Health Care, they instead were sitting in the Ed Sullivan theater, masturbating.

Meanwhile, as Obama was trying to fish the Health Care out of the icy river, all hell was breaking loose back on Capitol Hill! Under the pretense of "bipartisanship" and "seeking a compromise on this important issue," the Democrats and Republicans put on their ritual snake suits and sixty-nined each other for hours. Can you use "sixty-nine" as a verb? Whatever, that's what they were doing, in snake suits, the sickos.