Barry Brings Sexy Back To DC! 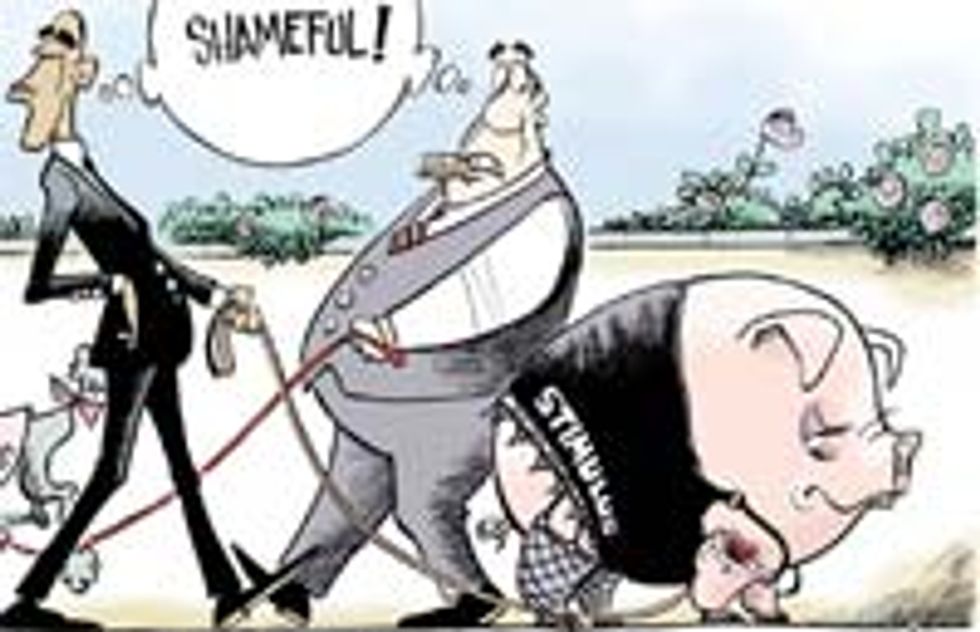 By the Comics Curmudgeon
Hey, how's what's-his-name doing, you know, the Muslim fellow? President Whosit? I guess there's some sort of stimulus thingie he's dealing with right now, and some tax-related dealies with the people he's trying to hire? Whatever, what we really want to know is: is he sexing our nation's capital up with all the sexy sexy sex? According to the media and its political cartoonists, the answer is a very sexy yes!

Click sexily on each cartoon to get more sexy close-ups!

Our new president set the tone early when it comes to the hott. Historically, most of the men who achieved our highest office were content to give an inaugural address fully clothed behind a podium; if they attempted any act of self-disclosure, it was wholly rhetorical. Few dared to cast aside both pants and underwear to display their "presidential staff" to the assembled multitude! President Obama knew that some in the crowd would faint, but that was a small price to pay for this important gesture that change had "come," if you know what we mean.

Even the man's pets are sexy! Sasha and Malia are still waiting on that new puppy, but heads turn when their dad goes on his daily constitutional with Candi, the Obama family's beloved whore-pig. Yes, his new neighbors thought it strange at first, but soon everyone in Washington came to love this tradition from the Chicago meat-packing districts, which began in the 19th century when the mayor of Chicago would ceremonially pardon the most beautiful pig from the city's slaughterhouses, and then non-ceremonially have sex with it. From the garters to the fishnets, that's one piece of pork that Democrats and Republicans can agree to vote yes on! Oink oink, baby!

As unorthodox as Obama's choice of pets might be, the man still has his limits. When he found out, for instance, that Tom Daschle is attended at all times by a harem of half a dozen hairy sex dwarves, who strip him naked and pleasure him at regular 20-minute intervals, no matter what the time or place, the president began to suspect that his HHS nominee was not in touch with mainstream American values. He should have known that the Dakotas are a cesspool of depravity.

Still, Barry was determined to cut a swath through the ladies of our nation's capital, and as a good liberal he doesn't discriminate based on color, creed, or kink. Here he tries all his patented "Obama moves" on this lovely young woman, who like chocolate, flowers, acoustic guitar, and dressing up in an elephant suit. (Since elephants aren't hairy enough to earn the sobriquet "furry," we call this particular subset of the genre "trunkies.")

It was meant to just be a one-off fling, of course, but you all know the saying: "Once you go trunk, everything else is bunk." Barry was smitten, and wanted to make an honest elephant woman out of her! But while Obama wanted to go public on the majesty of their man-beast love, she was too ashamed of her pachydermic proclivities, and fled from him any way she could. His heart was broken, but he knew that he'd eventually be able to move on emotionally, possibly by bombing somebody.

How classy is Barry, though? Elephant-girl gave up her trunky ways and pledged herself to a lifetime of chastity, only to discover she'd been knocked up. Our man Obama of course gave her a ride to one of the new chain of free government-run abortion clinics he had established with money taken from the defense budget, and took her out to lunch afterwards -- the least he could to prevent the possible birth of a terrifying human-elephant hybrid.

And then the little half-presidential Uncle Sam-hatted fetus he had made went up to fetus heaven, where the amniotic fluid is always warm and the nutrient flow through the umbilical cord is never obstructed, and there he made friends with an adorable Mexican fetus, and they played together forever and ever, the end.