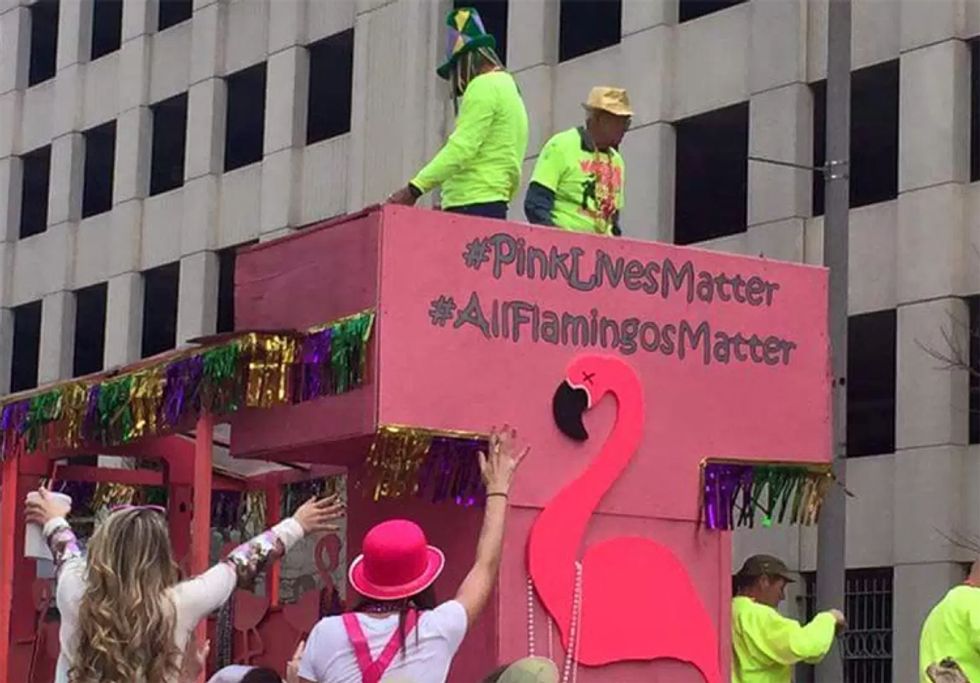 It's funny because don't you have a sense of humor?

You'll be astonished to learn the shooting death of Alton Sterling in Baton Rouge, Louisiana, took place in a community that was not entirely free of racial stresses. Yes, really, even though racism is officially over. So please keep in mind that while some hotheads may consider some of what we discuss here examples of "racial conflict," that is only because you are a liberal racist who sees racism everywhere.

Still, there are probably some people who might find February's Mardi Gras parade, known in Baton Rouge as the Spanish Town Parade, a tad problematic, seeing as how it featured some hilarious jokes about cops killing black people, like the big "Pink Lives Matter" float pictured above and below. You see, it was a funny little play on the "black lives matter" movement, only it featured a photo of a cop shooting a flamingo, the parade's mascot. But it's OK, you see, because the Spanish Town Parade is famous for its outrageous humor. Besides, there were no racist images, just pictures of flamingos getting abused by police. Totally different!

The back of the float featured amusing bird jokes (and that's all they were, you hater), like an invitation to join "the Million Perp March" with "Louis Fair Hawk Khan," "Wings Up, Don't Shoot!" and something about "Freddie Gray Goose," although we can't find a copy of what's written underneath:

Then there was another float featuring this amusing image of a flamingo being beaten with police nightsticks, wearing a sign reading "I can't breathe." You know, like that guy who had to die for selling loose cigarettes. It, too, is only a joke:

Oh, and also some guys waved Confederate flags, because Mardi Gras is all about venerating Heritage.

Now, while the people who made the floats and signs no doubt thought they were really a "hoot" -- another bird joke! -- not everyone in Baton Rouge has a jolly sense of humor about the topic of cops killing black men; one local blogger labeled the floats "a piss poor parade." She noted,

Parades are public events, for public enjoyment. The ENTIRE public. If Spanish Town was for “whites only”, someone should have posted a sign. I’m sure some residents still have a sign or two stored, just in case ... I shouldn’t have had to look at the black children around me and wonder if they recognized what they were seeing. I shouldn’t have had to feel like an outsider in my hometown.

See? No appreciation of funny jokes at all. Gary Chambers, the publisher of another Baton Rouge magazine, called it "racist trash" for some reason. He told Fusion it was especially inappropriate since the parade took place during Black History Month:

“They make fun of everybody, but when you go to the point of mocking an unarmed African-American man who lost his life in the streets of this nation, I just don’t find that funny,” Chambers said. “Every year they do this… and we’re supposed to be ok with it.”

But one police shooting and a few sour reactions to very humorous parade floats certainly don't say everything about race in Baton Rouge, not in the larger scheme of things. How about this? In 2015, residents of the primarily white southern part of Baton Rouge attempted a petition drive to break away from the rest of the city -- not that this attempt at secession was about race, no, never, no:

Supporters of the petition said they wanted to see their tax dollars better spent -- they claimed two-thirds of the parish’s tax dollars were generated in the St. George area, but only one-third was invested back into that community -- and wanted a better school system for their area, but opponents painted the issue as racially motivated.

“Though the campaign doesn’t talk about it in these terms, a predominantly white and middle-class area of south Baton Rouge is attempting to secede from a school system and a city that is majority African-American, and includes the poorest residents of the parish,” The New Orleans Times-Picayune reported.

Well that seems like pure coincidence, doesn't it? It was about tax fairness, clearly. Tax fairness for white people. The petition drive failed by just 71 signatures, and its organizers plan to try again.

But what about law enforcement in Baton Rouge? There's no reason to think there are any problems there, is there? If you were a suspicious sort, you might be concerned by that time in 2014 when Baton Rouge Police officer Michael Elsbury resigned after a local TV station obtained racist texts that he'd sent, in which he ruminated in great detail about how much he enjoyed thinking about killing black colleagues, but had to be satisfied with merely arresting black people in the community:

The texts also read, “I wish someone would pull a Ferguson on them and take them out. I hate looking at those African monkeys at work…I enjoy arresting those thugs with their saggy pants.”

The texts only came to light when a friend of Elsbury's turned them over to both the police department and the TV station, which presumably taught an important lesson to other racists, if any, on the force: Don't leave any evidence.

Baton Rouge is about 90 miles from Iberia Parish,* where, in March 2014, a 23-year-old black man, Victor White, died of gunshot wounds while handcuffed behind his back in the rear seat of a cop car. The Sheriff's office insisted White shot himself with a .25 caliber handgun that was somehow missed when deputies frisked him -- twice -- for contraband before they placed him in the car. Investigations into White's death were closed in February of this year, although his family has filed a wrongful death lawsuit against Iberia Parish Sheriff Louis Ackal and the arresting deputy.

The case has some decidedly strange aspects, like a coroner's report saying White shot himself in the chest, according to the Baton Rouge Advocate. The bullet entered White's body

on the front right of the side of the chest, just to the right of the nipple. The bullet traveled “slightly front to back, slightly upward” and from right to left, piercing the middle lobe of White’s right lung and going through his heart, then through the left lung before it exited his left armpit.

Although the decedent was handcuffed at the time with his hands to his back, … the pathologist and investigators agree that he would have been able to manipulate the weapon to the point where the contact entrance wound was found[.]

That's one magic bullet, all right.

Yet somehow, even the Justice Department declined to bring charges against the deputies, issuing a news release in December 2015 saying investigators' review of the evidence was "insufficient to prove beyond a reasonable doubt that any officer fired a weapon at Mr. White." So that was that: it was ruled a suicide, although his family is still suing.

The civil lawsuit against Sheriff Ackal in White's death isn't his only legal trouble. He's also been indicted on federal civil rights charges in beatings of inmates at the parish jail. Nine deputies have already entered guilty pleas. But that's not all: A recording surfaced in late June of Ackal making anti-Semitic threats against the federal prosecutor in the case:

According to a transcript of portions of the recording filed into the court record, Ackal made reference to “this sorry son-of-a-bitch Jew bastard in Washington, saying he is going to send me to a federal pen.”

Ackal also talks about how a prosecutor told him, “I’m gonna put you in prison” and discussed a possible deal with the sheriff.

“You know about these people. You can give them to us,” Ackal said, recalling what federal prosecutors told him. “I said the only thing I’m gonna give you — f*****g shoot you right between your g*******d Jewish-eyes-look-like-opossum bastard.”

He seems nice. And that's the guy responsible for one part of law enforcement in southern Louisiana. He's still allowed to carry his gun. We should, of course, point out that Alton Sterling was shot to death by officers of the Baton Rouge Police Department, a completely different agency, so maybe the BRPD's institutional culture is wholly unlike that of the Iberia Parish Sheriff's office. It's really too soon to say, isn't it?

In any case, it would definitely be unfair to play the race card and suggest that the death of Alton Sterling took place in a larger context of racial tensions in Baton Rouge, because the only people who think racism is a problem are racist liberals and racist blacks. When Donald Trump is president, he'll put an end to all that politically correct nonsense.

* Update/Correction: Yr Dok Zoom cannot be trusted with geography. As several commenters note, Victor White did not die in Baton Rouge, but in Iberia Parish, about 90 miles away by road. Back in 2014, when we wrote our story about Michael Elsbury, the Baton Rouge cop who sent the racist texts, we mistakenly assumed that Victor White was also killed in Baton Rouge. The RawStory post we based our 2014 story on mentioned that the same week the Elsbury story broke, Al Sharpton was in Baton Rouge for a rally protesting the death of Victor White -- because obviously a protest in Baton Rouge would have had a greater impact. We should have checked more carefully where White's death, not the protest, had taken place. Wonkette regrets the error.