Who Won Battleground Ferguson: Po-Po Or Journos? The Answer Will Amaze You! 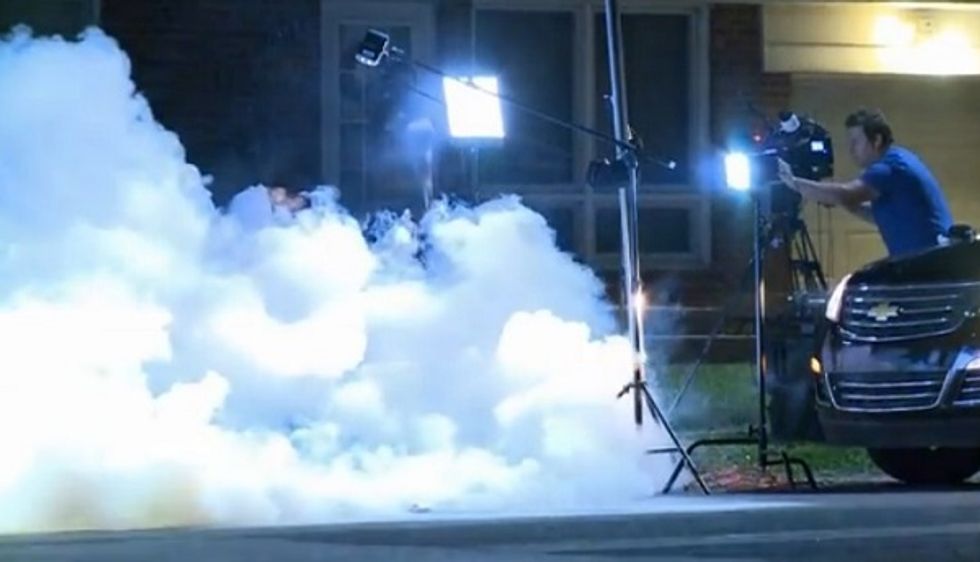 As the teargas wafts away from the streets of Ferguson, Missouri, and the some of the members of the media covering the Mike Brown protests start to drift away to cover more pressing stories like the VMAs, let's take a look back to see who came out ahead in the Battle to Cover Ferguson: the po-po or the journos.

The police came out of the gate strong a few days into the unrest, barging into the McDonald's down the street from the protests and busting up the press party that had formed around the free wifi and unguarded electrical outlets. Wesley Lowery from the Washington Post and Ryan J. Reilly from the Huffington Post were bundled unceremoniously off to jail for, near as we can tell, taking too long to turn off their cameras, genuflect, and scuttle humbly out to the door when told to leave for no reason.

Lowery and Reilly were released without charges after the chief of the Ferguson Police was tipped off by another reporter and intervened. Despite a wall of silence from the police, Reilly finally managed to identify the officer who allegedly pushed his face into a glass door during the arrest. He turned out to be a charming pillar of the community and the subject of a pending civil rights lawsuit for hog-tying a 12-year-old who was out checking the mail. As impartial Wonket Jernalism Monitors, we would never judge anyone based on looks and certainly would not assign any personality characteristics to Officer Justin Cosma based on this harmless photo from a Facebook page for cops with tattoos.

Along with the as-yet unidentified cop who is accused of slamming the Post's Wesley Lowrey into a soda machine while taking him into custody, Officer Friendly here seems to not be in any fresh trouble. If hog-tying a child for the crime of existing in his own driveway does not get you stuck on gunless desk duty, we guess there's no problem with using a handcuffed reporter's face to open a door? While Reilly and Lowrey's arrests helped bring about an agreement between the Missouri ACLU and three primary law enforcement agencies working in Ferguson allowing both public and media to film the police, there's little sign that anything changed on the ground as a result, so we're awarding this point to Der Kriminalpolizei.

Lowery and Reilly were arrested on the eve of the advent of Captain Ron Johnson and, for all his early promises of peace and reconciliation on taking over as Top Cop in Ferguson, Captain Ron was sometimes short on patience with the reporters who trailed him everywhere and inconvenienced his officers when they were trying to control the crowd or make arrests. The captain himself almost started a mild-mannered international incident by arresting an obviously harmless Canadian bureau chief for CTV when he asked Johnson why he'd ordered media out while police cleared the last few protesters from an area. Not content to rankle our cousin to the north, Captain Ron had zipcuffs put on another group of reporters that included a war correspondent sent from Britain to its troubled former colony. Both foreign invaders were lucky enough to be released pretty quickly and were not marked as enemy combatants or waterboarded, that we know of, which we consider a victory for these imported members of the press.

Livestreamers, though somewhat low-budget compared to reporters from bigger outlets, nonetheless proved to be a significant threat to anonymous dickishness from the police, since they saw and heard everything and sent it out live to tens of thousands of viewers. Tim Pool, during his fourth night of hours-long continuous broadcast for Vice News and the second consecutive night dodging gunfire, was pushed toward a police line that officers told journalists they'd be arrested if they didn't get behind. One picket in the police fence objected to letting Pool through because he didn't like the PRESS patch on Pool's bulletproof vest. "This doesn't mean shit," he said, ripping the patch off and throwing it down on the pavement. "This anybody can have."

This was not long after Pool had been forced by riot police to leave the spot where he'd taken cover and flee live fire through clouds of teargas. Still, we'll call this a win for the press since Pool got into the corral unarrested anyway, and a few minutes later, a much nicer cop complimented him on his bulletproof vest, calling it "slick."

The media's greatest vindication came after CNN's Don Lemon, fed up with being pushed around, identified and doxed the St. Louis County cop who manhandled him during a live broadcast.

Lemon struck gold, unearthing an hourlong "speech"  Officer Dan Page had given to a gathering of local Oathkeepers that was so nutty, even the Oathkeepers felt the need to distance themselves. Did you know there are four sodomites on the Supreme Court and Barack Obama is an illegal alien president and that Dan Page hates everyone and is poised to kill, kill, kill you all? Page's commander suspended him and said he'd have fired Page right away if review wasn't required first. Advantage: press with an extra tip of the hat for the sheer absurdity of Dan Page's magnum opus. Also: DO NOT MESS WITH DON LEMON.

The inaugural Chief Tom Jackson Prize for Police Egregiousness in Battle goes to whomever bombed an Al Jazeera crew at close range with teargas and made them run away from their equipment, an incredible sequence of events that was captured by a camera from a local NBC affiliate and made for the most unbelievable video from any skirmish between the media and the police in Ferguson. Despite the fact that the heavily militarized police couldn't even figure out how to turn off the crew's camera and lights and had to point them down at the ground instead, we're going to award this point to the cops since they accomplished their apparent goal of shutting down Al Jazeera's reporting, and there is no penalty for flagrancy in Ferguson.

Still, this encounter yields a poignant image showing better than anything that for all their teargas-slinging bravado, cops running things in Ferguson were out of their element. At about 1:22 in the KSDK video, the St. Charles County Regional SWAT truck rolls up all badass next to Al Jazeera's abandoned gear. Rather than a herd of snarling riot cops tromping heedlessly onto the blacktop, the back door cracks open and one foot steps out tentatively, as if there is anything left to fear after the dangerous journalists have been forced to flee up the residential street.

Image from video by KSDK

Of course, the central struggle between the police and the press in Ferguson is one in which the police have triumphed without a single (camera) shot being fired. Darren Wilson, the 28-year-old officer who killed Michael Brown, has "completely vanished from public view" and has not given any statement on his version of the shooting. Even the incident report, which should presumably contain Wilson's recollection of what transpired on Canfield Drive, is virtually devoid of any details and sheds no light on what the hell happened. Keeping the single most relevant and potentially damaging person completely sealed off from the media is an unqualified WIN for the Ferguson Police Department.

Going by the record, it looks like the cops have successfully fought the media to a 3-3 draw during the protests in Ferguson. Given the minimal blowback for their impulsive or excessive actions, though, we're tempted to say the po-po did it better. The journalists' little livestream hotspots and teargas-stained notebooks simply couldn't stand up to all the mighty hardware rolling through the streets, and as we all know, whoever has the most toys wins.

This Battle of Ferguson might not end with a ticker-tape parade for our domestic paramilitary forces, however, since the news has your commie liberal president talking crazy about arming local police departments like they are the military, since they are not the military. Attention, "peace officers" of America! Try not to act like every street demonstration is a threat to the Republic that calls for the suspension of basic civil liberties if you want the tanks to keep rolling in from the feds.

You can follow Beth on Twitter for the latest from Ferguson, the Teargas Capital of North America