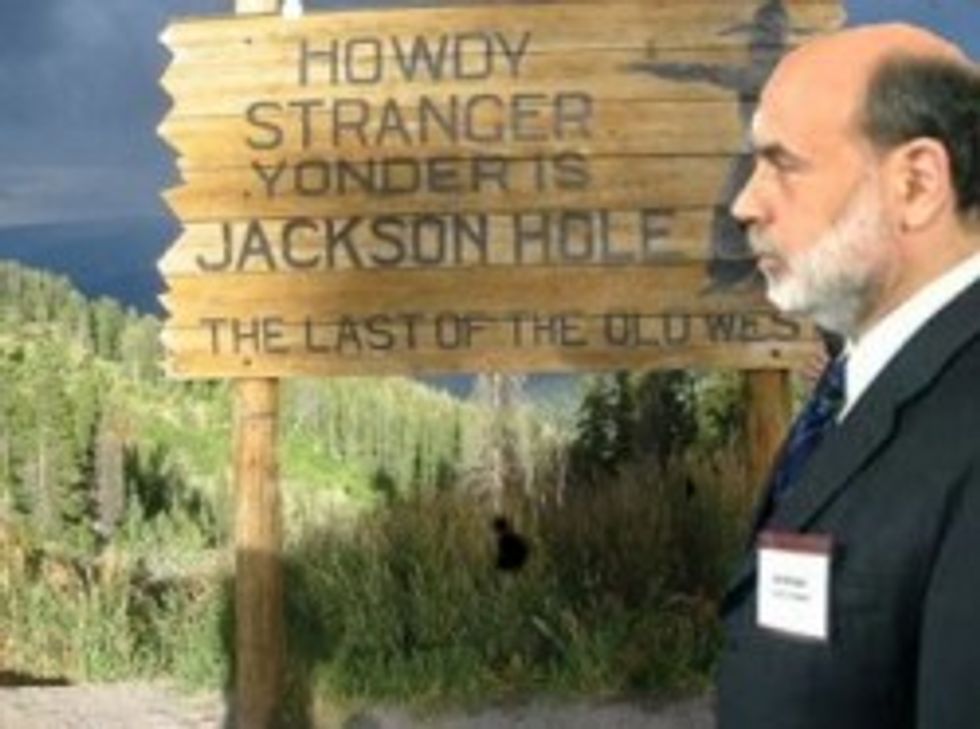 How exciting, soon we will be in the midst of a third round of quantitative easing! Does this mean we should break out the Korbel and celebrate? No, it probably does not, because like most of our economic policies, it will mostly benefit Incorporated Americans and people with lots of investments and will punish Poors (i.e. most of America) and possibly cause some social unrest. Here let us Explainer you!

What is Quantitative Easing?

But first, what IS quantitative easing? Quantitative easing means that the Fed creates money out of thin air, and uses it to buy up a lot of long term assets like Treasury bonds or mortgage backed securities, making long-term interest rates go down and giving investors (i.e., Incorporated Americans) a motivation to spend money. So, to simplify: let's say a bank is holding $50 billion in government bonds that it would like to sell, but no one is buying them. The Fed is now able to step in and buy them, freeing up that $50 billion and allowing the bank to now lend money, thus increasing the flow of capital into the economy. In addition, the purchase of the bonds stimulates demand for bonds, and raises their price. Since private banks hold billions of dollars in government bonds, they can sell them and use the money they raise to make loans to businesses.

So this, in theory, is how it works.

Now that we know what quantitative easing is, we now might be wondering if it works. And the answer is kind of twofold. One: depends on who you ask, and two, depends on what we mean by "works."

The Federal Reserve, the Bank of England, and the Bank of Japan have all used quantitative easing in order to boost their respective economies. Supporters of the policy claim that quantitative easing has increased the supply of money, allowing banks to lend money to people who otherwise would not have qualified for loans. According to the Guardian,

It has not worked quite as planned – banks have hoarded the money to boost their reserves. But critics of QE who say it is useless must answer the point that without it banks would have withdrawn even more loans, triggering more bankruptcies and repossessions.

Another pitfall is that higher bond prices also translate into lower long term interest rates (because the rate a bond pays is fixed, if investors pay more to get the bond, the rate it yields starts to look correspondingly lower).

The Bank of England's own report on quantitative easing found that it helped Incorporated Americans and did little or nothing for anyone else. Via Business Insider:

Last month, the Bank of England issued a report saying ... the Bank of England’s policies of quantitative easing – similar to the Fed’s – had benefited mainly the wealthy. Specifically, it said that its QE program had boosted the value of stocks and bonds by 26 percent, or about $970 billion. It said that about 40 percent of those gains went to the richest 5 percent of British households... The BOE countered that the benefits of easing may have trickled down, and that “without the Bank's asset purchases, most people in the U.K. would have been worse off."

Donald Trump – not usually one for distributional analyses of monetary policy – said CNBC [on Saturday] that “People like me will benefit from this.”

(By "people like me" he means "rich people," not "people who believe that the President was born in Kenya" or "people who are orange" or "people with hair that defies the laws of gravity.")

The reason is simple. QE drives up the prices of assets, especially financial assets. And most of the financial assets in America are owned by the wealthiest 5 percent of Americans.

Bernanke is probably mindful of this report and of this criticism, which is why is he is buying mortgage-backed debt with the idea that it will lower the rates on mortgages, which in theory will benefit the middle class.

But anyway,  the question might not be "does it work?" but "for whom does it work?" And the answer, even from liberal rags like Business Insider, is that it works, but the direct and primary beneficiaries are not You People -- unless, of course, You People have enough money saved for a down payment on a home (or own a home with enough equity to allow for a refi).

But Will There Be Jobs?

Remember, the Fed is doing something very specific with the money it is making out of thin air. It's not throwing it out of the windows of an SUV that is careening down the streets of Los Angeles; it's buying bonds. And it is buying bonds to lower interest rates, and to increase the banks' supply of money in hopes that they will lend it for low interest rates. According to CNN Money, it might create some jobs, and it might not:

"We know that QE reduced interest rates, but we also know that has not led to more construction, more mortgages, more business investment, or more lending," [Brandeis University Professor and former Federal Reserve Economist Catherine] Mann said. "Since it hasn't done any of that, it probably hasn't created jobs either."

Meanwhile, banks are sitting on $1.5 trillion in excess reserves and haven't been eager to lend that money out. In fact, low interest rates make it harder for them to turn a profit on new loans.

Still, some economists say QE3 could be modestly helpful. It may drive stocks higher. It could also support the nascent recovery in the housing market.

In sum -- liberal rags like Business Insider, CNN Money, and the Bank of England's recent report, are skeptical about the ability of quantitative easing to create jobs. That is not to say that there are no advocates for it -- after all, Bernanke said he is doing this because he is concerned about employment, and in his Jackson Hole speech, told academics that the Fed’s first two rounds of quantitative easing had created more than 2 million jobs.

Some people think quantitative easing works; some don't. We will all soon find out for ourselves.