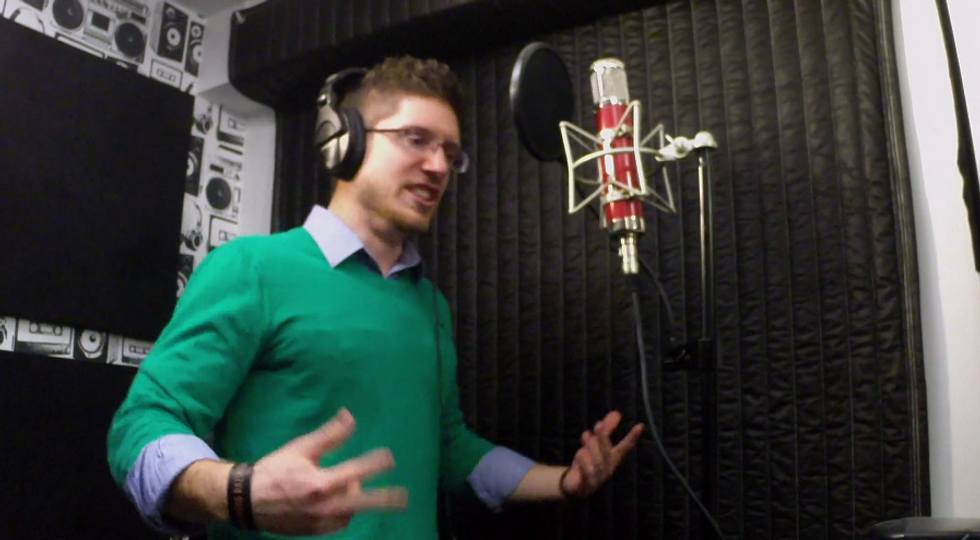 Oh boy oh boy oh boy. This is the Jill and Jessa episode we have been waiting for. No, not the one where Josh comes back all tearful from sex rehab (though that episode better happen, goddammit) but the episode where the Christian rapper Flame teaches Ben to spit bars and drop beats. This is going to be so amazing, and by "amazing" we mean sadlarious.

We are visiting Jill and Derick down in the terrifying wilds of Central America so that we can watch their squashy baby, Israel, instead of Spurgeon, the squashy baby that belongs to Jessa and Ben. Hooray?

Jim Bob and Michelle are visiting and we get to watch the squashy baby get a haircut. It does not improve things.

We are treated to a montage of the Duggars driving around Central America forcing Christianity on people who are likely already Christians, but not the particular virulently conservative strain of conservative that the Duggars are.

Let's hop over and watch Jinger pretend to be a photographer. She tells us that natural light is really great for photography. Whoa, if true. She's going to photograph Sierra and her family. (Remember Sierra? We had to spend WAY too much time with Sierra last week.) Sierra has five children, because of course she does, and we get to watch Jinger pretend that taking photos of her friends is a job instead of a hobby. She does get to wear a jaunty hat, however, as is the way of photographers, we guess?

Now it is time for a montage of all the shots of Sierra's boring family. Oh god, are we going to get a Sierra spinoff??

Fuck we are back to the treehouse building thing. No one cares about this. John David and Jessa are fighting over whether this behemoth needs electricity or not. Now it's time for a building montage! Jesus Christ there are a lot of montages in this episode. We know they make these things on the cheap, but this is ridiculous.

Joseph explains that he is totally used to watching the lady Duggars help build things. Joseph Duggar, proto-feminist. The non-helping siblings bring hot chocolate out to the building siblings and it is a touching moment where everyone agrees that hot chocolate does indeed taste delicious and is indeed warm. Insights abound in these Duggar shows.

Jessa and Ben are packing to go visit Flame. Jessa explains that she wouldn't know about rap save for Ben liking the fresh dope hippity hop beats. We get treated to brief snippets of Flame's mad skillz. You, however, dear reader, can watch an ENTIRE FLAME VIDEO.

Cut to Ben explaining that it is really hard for him to have to change diapers and he has to jump over a "mental hurdle" in order to hype himself up for disposing of his squashy baby's poo. Sack up, Ben. You're going to have like 10 more of these things, so get used to it.

A passel of the Duggar girls are trying to call Jill and Derick down in scary scary Central America. Everyone is very worried that they can't reach them. They have probably been murdered by Contras or Sandinistas, or something. There's supposed to be some big moment of tension around this, except that after like two attempts at Skyping, about one minute apart, they reach Jill and squashy Israel, who are apparently not dead.

We learn that Israel is growing up multilingual because he makes vague squashy faces of recognition when someone says 'adios.' These people really set the achievement bar low.

Time for Ben to explain how he learned to listen to hip hop, but of course only Christian rap, as they get ready to fly off to St. Louis to meet Flame the rapper. Ben has listened to hip-hop since back in the day, which in Ben time is about 18 months. Keep it real, Ben.

Here are some Duggar children explaining that they do not know what hip hop is. One describes it as "kinda like rock music" and another (what? we're losing track) as "one of a kind" in the same tone that Midwesterners say something is "interesting" and Southerners say "well bless your heart." Polite condemnation, basically. We drag in a still Josh-less Anna to explain that hip hop is a beat, and rappers rap over beats. She thinks. Maybe.

Flame's studio looks suspiciously like the basement of his house, but hey, not gonna judge. Some other Christian music people are hanging about, including V. Rose, who looks like a really low-rent Iggy Azalea.

Ben does a lot of bro hugs with the rappers but only waves tentatively at all the women in the room because he might be too tempted if he hugged them.'

Now here is V. Rose singing the hook on a Flame demo and god we wish we had no ears.