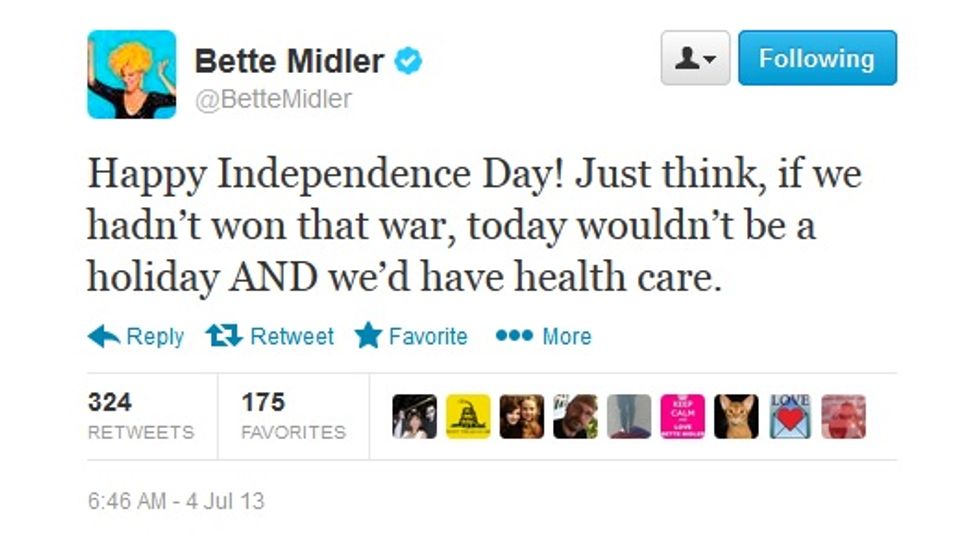 Oh golly guys, Bette Midler tweeted this thing on the Fourth of July, she must Hate America almost as much as that Chris Rock guy!

Fact-challenged fuckmonkey  Ben Shapiro, the crypt-keeper of Dead Breitbart's Home For Wannabe Conservative Media Stars, was not going to take this slight against America lying down! Nosiree, he had some very important and patriotic and manly tweetsponding to do! Of course, "If you like universal healthcare so much, why don't you go to Britain?" doesn't really sound so scary, so instead, he figured Bette meant she'd like any socialized medicine:

Haha, "love it or leave it" is such a fresh new thing to say! (Also, the long acronym there is short for "Don't let the door... and so on. Witty!) Just in case anyone missed his point, Shapiro was back after a moment to make sure we understood exactly how perfidious Midler's tweet was:

You know, because if you're not free to go bankrupt after a hospitalization, how can you call yourself free? We'd love to see Ben Shapiro try to convince a group of French people that they are suffering under tyranny. (Trick question! Ben Shapiro does not converse with filthy socialists!)

By his third and fourth comments (this barrage all happened within the space of a few minutes), we're fairly certain that Shapiro had convinced himself that Midler was the one who brought up Cuba in the first place:

Guess it'll be a cold Independence Day in Hell before Bette Midler dares to admit how much she wants to live in Cuba again!