Ben Shapiro Is Our Intellectual Better, And The Other Funniest Deleted Comments You'll Read All Day 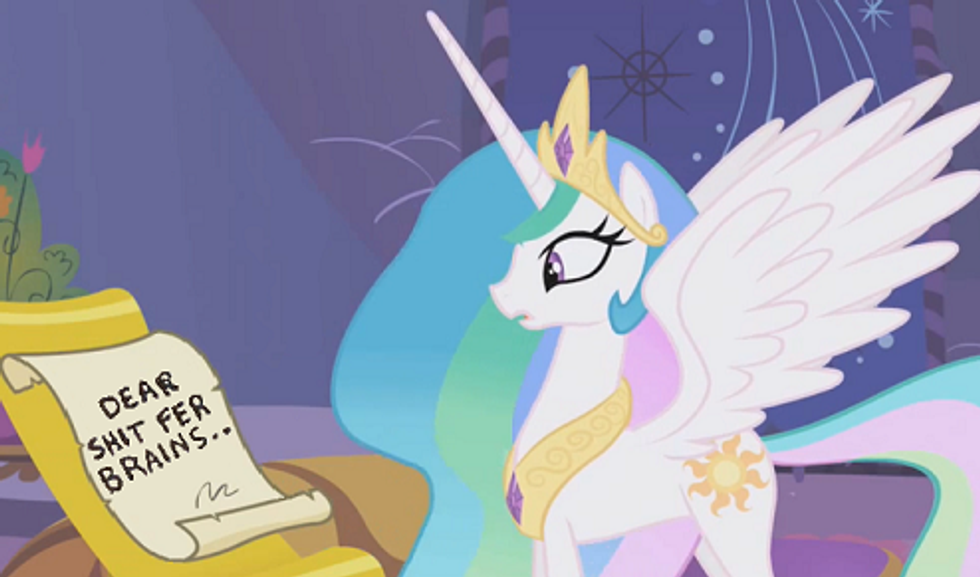 Greetings, mis pequeños Wonquitos! Hope you're up for another exciting trip to the Purgatory of Ideas that is the comments queue!

Our first unsuccessfully attempted comment was a reaction from "Katherine," who was quite displeased with our failure to recognize our intellectual betters, particularly the Big Thoughts of Ben Shapiro:

"Vitriolic," dear. Yes, it is true, we are driven by mindless emotions, like thinking that people should be able to feed their families, and that the stimulative effect of unemployment insurance is good for the economy. But Ben Shapiro, he is one smart fella, and he felt smart.

We got a couple of scolding emails from "cetude" on the topic of Colorado's exciting new mary-juana law:

How amusing. I hope you all realize your EMPLOYER can still FIRE you for testing positive for pot. All it takes is one urine tests and it stays in your body for three solid months. What a great easy way to get rid of employees!

We bet no one in Colorado was aware of that teensy loophole. Now, we did briefly consider approving this helpful word of caution, but then thought, wait just a darn minute here, this twerp is basically saying, no, you fools, do not touch the evil weed, for you stupid hippies will surely be found out! It's a TARP! And so, welcome to the derp-pile, cetude.

We feel just the slightest pang of guilt for including this next one, but come on, we pretty much have to. In our contribution to last week's Wonkiversary GalaPalooza, Yr Very Own Doktor Zoom said that "with this momentous anniversary upon us, I may ask myself, 'Well, how did I get here?'" And so we got this comment in the queue from a would-be commenter whose moniker we will simply redact, because we would like to let them have another shot at commenting. This person asked,

To which we can only say, gosh, we're flattered that you liked it, but... do you really need to ask? It is kind of a direct quote of a not particularly obscure song. And did you somehow miss all the other people in the thread riffing on other lyrics? We are sorry, but if you wish to comment here, you will need to up your game.

Also, no. It was a Mystery Science Theater 3000 reference.

In our "E-Blast from the Past" category, we got a message from a gentleman who appears to be doing some blogwhoring, which is one of those bannable offenses on Ye Old Wonket if you do it much. This one's particularly puzzling, since it appears to be taking issue with a piece from a year ago, in which we corrected an error by then-FishBowlDC columnist Betsy Rothstein. Ms. Rothstein said that MSNBC's Goldie Taylor had "never served" in the military, which Yr Editrix corrected by noting, "Goldie Taylor knows 57 ways to kill a man, as does every self-respecting US Marine." Wow, that was a long set-up! But to get past the tl;dr -- Rothstein said that Taylor never served, we said, no, you're wrong, she did. And then almost a year later, we got this chiding message from "averageblackman:"

Um...actually Goldie Taylor did serve. She was a marine. Get ya facts straight.

Hey, thanks for letting us know! We'll update the post to say that we were correct! Averageblackman helpfully included a link to his blog, which said nothing about Goldie Taylor or the Marines.

And finally, an important note from "RammRodd," whose username suggests he may own a pickup truck with a 4-inch lift. RammRodd objected to Saturday's piece about gun fondlers' objections to measures to keep guns out of the hands of mentally ill people who have been judged to be a danger to themselves or others:

Mental health is the avenue to gun confiscation.. Politicians and Media push gun control in a dangerous and dishonest manner... American Psychiatric Asso: Half off Americans are mentally ill..

Well, of course, everyone wants to take your precious guns, sure. And then there's that second story, claiming that the APA is full of dangerous creeps who want to declare everyone mentally ill. Turns out it's a story from the always-reliable WND last June; even more impressive, the article's primary source for its attack on psychiatry is a piece by the "Citizens Commission on Human Rights International," which sounds like a pretty impressive group, until you discover that the CCHRI is a front group for Scientology. Can't go thinking that mental illness is real, after all, because any fool knows that what allegedly "mentally ill" folks need to do is to get cleared out of all those nasty ancient aliens clogging their brains. So, nahh, maybe we aren't too impressed with the sourcing on RammRodd's claim that the mental health field is full of monsters who are just waiting to declare people sick in the head and then take their guns away.