Benghazi, Part Eleventy Billion: The Return Of The Revenge Of The Bride Of Benghazi 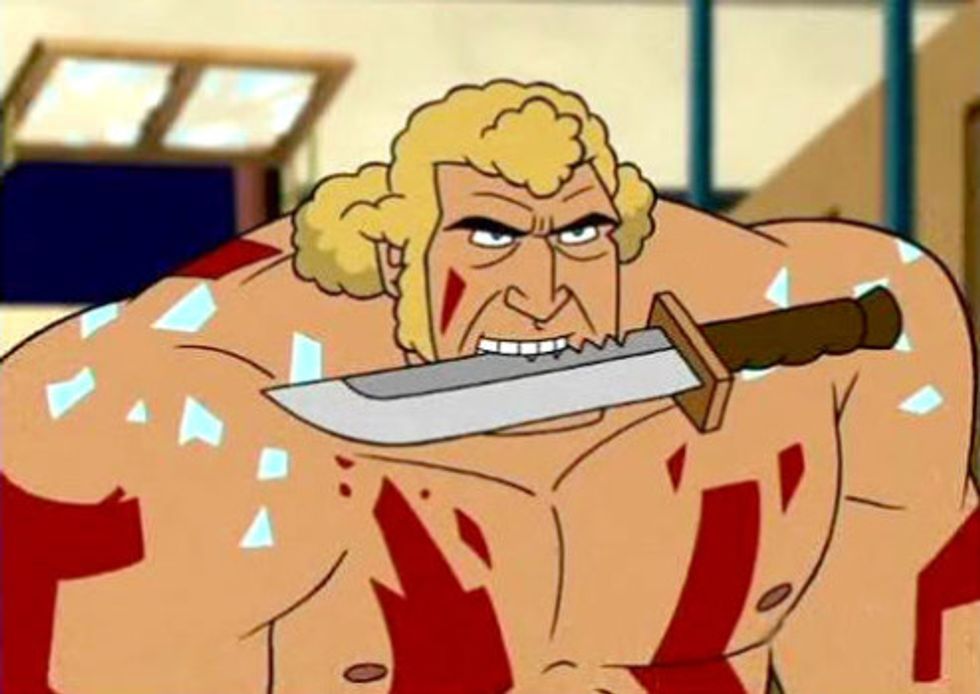 It has been some time since we have heard anything about our old friend BENGHAAAAAAAZI!!111!!!! We are of course referring to the insidious act a year ago when Hillary Clinton traveled via wormhole to Libya to smother Ambassador Chris Stevens and three other Americans with her vagina while one of her vast army of clones went to the White House to roofie President Obama, drag him out to the putting green on the South Lawn, and leave him to wake up thirteen hours later clutching a bloody nine-iron in his hand with vague memories of pummeling American heroes to death in a frenzy of murderous rage. It’s really the only scenario that makes sense.

Ferret-faced yard gnome Darrell Issa has been hot on the trail of the cover-up. Yesterday he dragged Admiral Mike Mullen and Thomas Pickering, the two chairs of the State Department’s Accountability Review Board on the incident, up to Capitol Hill for yet another hearing to get to the bottom of what is apparently the Marianas Trench of scandals. Maybe Issa should call in James Cameron and his bathyscaphe.

We’re not sure just what the hell Congress proved with this latest kabuki set piece, since we already knew that they are more useless than a sack of freshly amputated gangrenous limbs in the trash pit behind a Civil War field hospital. Admiral Mullen, a man with forty years of experience in the military, had to once again explain to Issa and hematoma cluster Rep. Trey Gowdy that no, contrary to their expectations born of watching every Chuck Norris movie in the 1980s, there was no way Delta Force or the Rangers or even Team America could have gotten to the consulate in time. Pickering, a man who spent forty years with the State Department, had to explain very slowly and using small words so the Republicans would understand, that the U.S. has over 270 embassies and consulates around the world, and what with our military stretched thin by its various commitments and the GOP in its budget-cutting mania having actually cut security funding for our diplomatic outposts, it is not realistic to think that the Expendables were going to swoop in and save everyone.

The ARB report that Pickering and Mullen co-chaired did find some lapses at the State Department over its handling of embassy security and the officials responsible for those lapses have been removed from their posts, but Issa doesn’t yet have Hillary or Obama’s severed heads to run up the flagpole atop the Capitol dome, so presumably this bullshit will continue.

Other tidbits from the hearing: “reporter” Katie Pavlich was ginning up the rubes with her usual sharp analysis, tweeting repeatedly that the ARB investigation never questioned Hillary Clinton because she had appointed four of its five members so the whole thing was a whitewash. Except whoops, as Media Matters explains, Clinton was required by federal law to appoint four of the five members of any ARB at the State Department. That’s some fine journamalism, Katie. Really top-notch.

Also all but two of the Democrats on the House Oversight Committee apparently left the hearing just before the parents of a couple of the people killed in Benghazi were due to speak. This has led to much argle and bargle and screams of HOW DARE YOU and YOU ARE SPITTING ON THE GRAVES OF HEROES and GLERGH GRIBBLY GLARRRRRGHHHHHHH! By the time you read this some perfectly reasonable explanation will have come out. One of the Dems who stayed was ranking minority member Elijah Cummings. Would the rest of the Dems really get up and leave without a really damn good reason if the ranking member was staying? We’re betting that by the time you read this a good explanation will have emerged and this will turn out to be yet another case of a lie getting halfway around the world before the truth can gear up and get out to the C-17 sitting on the airstrip.

If the government shuts down, presumably we won’t have to hear any Benghazi nonsense for a while. Yet one more reason we may actually start rooting for it to happen.