Bernie Sanders And Spike Lee Want To Do The Right Thing. (GET IT?) 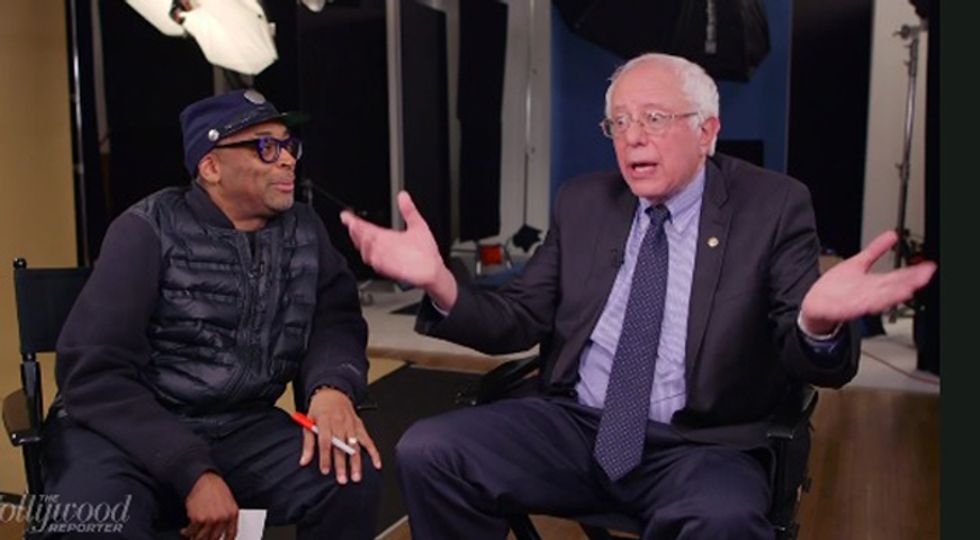 With the New York primaries coming up in two weeks, noted political analysis journal The Hollywood Reporter brings us this sit-down with two favorite sons of Brooklyn, Spike Lee and Bernie Sanders, both of whom can be summed up by a line from the character Ruth Ann in Northern Exposure: "He has so much energy. Of course, he gets a little preachy, but he'll probably grow out of that." That was 1991, and we're not sure either ever did. Still, he and Bernie have a fun little chat that actually goes beyond two celebrities sitting around talking about the old neighborhood.

Of course, they have to start with that, as Lee reads off a list of all the famous people from the borough (Bernie's sure it's because of Brooklyn's vibrant diversity and excellent public schools), and Bernie gets his turn to play Ringo Starr:

Lee: How do you go from Brooklyn to Vermont?

Sanders: By car... About a seven-hour trip north.

Then they get to the political stuff: Spike asks why Bernie is doing fine with younger black people, but older African Americans are solidly with Hillary. Bernie recognizes the problem:

We're doing phenomenally well with all of the young people — white, black, Latino, you name it, Asian-American. And we're getting killed, frankly, not just with older African-Americans but also older whites, older Latinos. It's the weirdest thing in the world. And what really bothers me is I spent half my life in Congress helping to lead the effort for senior citizens: We led the effort against cuts to Social Security — we want to expand Social Security; we took on the drug companies who are doing terrible things to elderly people. You know seniors are cutting their prescription drugs in half. So we have a lot of work to do in terms of reaching out to seniors, not just African-Americans, but seniors all across the board.

He doesn't quite say how he's going to do that, but Lee suggests maybe there's little to be done, given generational differences, what with Bill Clinton having played the sax on the Arsenio Hall show, and Toni Morrison proclaiming him "the first black president" -- a bit of sourcing that Sanders seems unaware of. Does Lee pass on the opportunity to ask Sanders a sharp question about that muffed debate question where Sanders suggested white privilege means not knowing what it's like to live in a "ghetto"? Sadly, he does. Missed opportunity, Mr. Lee.

Sanders praises Barack Obama, saying he'll "go down in history as one of the smartest presidents we've ever had. Brilliant mind ... also incredibly disciplined and focused." Noting that with all the media focus on catching politicians saying dumb things, which anyone is likely to do now and then, "He does it very, very rarely."

Much of the interview is standard Bernie talking points, with the usual stuff about Wall Street and campaign finance, but Lee does get Bernie to hit some new variations on familiar themes. On the proliferation of guns, Sanders repeats his position that guns for hunting, like in Vermont, are a fine upstanding tradition, but "I do know that guns mean something very different around urban America. And what we have got to do is get a handle on this horrific gun violence. There's no question about that." He touts his D-minus rating from the National Rifle Association, and notes again that he lost his first bid for Congress in 1988 thanks to negative ads from the NRA. He calls for strengthening instant background checks and closing the gun-show loophole, but carefully sidesteps a more radical suggestion from Lee: "A dear friend of mine, Father Michael Pfleger of St. Sabina Church in Chicago, he wants to say guns should be titled like cars." Bernie's not quite willing to go that far, so instead calls for increasing funding for mental health, to address the suicide rate, which constitutes 60 percent of gun deaths. It's a sidestep, but hey, a sidestep to another important part of the gun problem.

After a quick shout-out to Black Lives Matter, Lee moves on to Donald Trump; ever the movie animal, he wants to know if Trump reminds Sanders of Andy Griffith's character Lonesome Rhodes in Elia Kazan's A Face in the Crowd. Why yes, yes he does:

He is an entertainer by and large. He did very well on television; he knows the media very, very well. Don't underestimate him. And God knows who he is really, but we see what he personifies on TV every night. He knows how to manipulate the media very effectively, he knows how to do what he does with people. But let me just reassure you: Donald Trump is not going to become president of the United States. That I can say.

Sanders says that, empty though Trump is, the biggest thing he has going for him is Americans' frustration with politics as usual:

Trump comes along and says, "I got the solution, we're going to scapegoat Mexicans and we're going to build a wall a mile high." People are angry, what do you do? You don't get to the real issues as to why people are hurting, you scapegoat. You scapegoat blacks, Latinos, gays, anybody, Jews, Muslims, any minority out there, that's what you do. That is nothing new. That's what demagogues have always done, and that's what Trump is doing.

Also touched on: free public universities (Spike Lee is "proud to be a tenured professor" at NYU but notes that "if you're born in the wrong ZIP code, you're behind from the jump," and Bernie says "You're giving my speech here"); prison reform (privatized prisons, mandatory minimums, and disparate sentencing BAD); and finally, the New York primary, where Bernie has high hopes, but expects a close, tough fight.

If the whole 17-minute interview is more than you can avoid work to watch, you may want to skip to the very end, if only to hear Bernie Sanders look forward to his South Bronx rally Thursday night and call it, prompted by Lee, "The boogie down." Sanders also tells Lee, "I've seen and enjoyed almost all your movies," which ought to spark some intense speculation about which ones he skipped. We're betting School Daze and Bamboozled, because come on, nobody even streams those on the Netflix for purposes of relaxing before partaking in sex.