Bernie Sanders Is Bought-And-Paid-For Corporate Sell-Out Shillary For Hillary Now. (OR IS HE?) 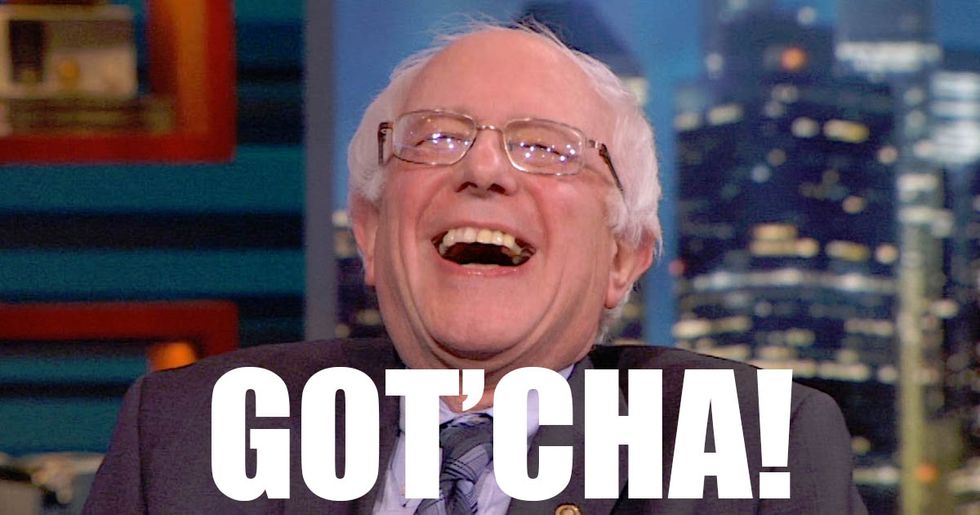 MOMMY AND DADDY LOVE EACH OTHER AGAIN!!

THIS POST HAS BEEN UPDATED, PLEASE SEE UPDATE BELOW, OH SWEET JESUS.

This moment has been coming for a minute, and though it may surprise a few of his most faithful fans, we can now report that Bernie Sanders has stated for the record that he will be voting for Hillary Clinton to be the next president of the United States. It happened on MSNBC, where all the sexy things happen:

Nicolle Wallace: Are you going to vote for Hillary Clinton in November?

BERNIE: Yes. Yeah, I think the issue right here is I'm going to do everything I can to defeat Donald Trump. I think Trump in so many ways would be a disaster for this country if he were to be elected president. We do not need a president whose cornerstone of his campaign is bigotry, is insulting Mexicans and Latinos and Muslims and women, who does not believe in the reality of climate change, when virtually every scientist who has studied this issue understands we have a global crisis.

This is not somebody who should become president.

But you can mark it on your calendar, and also on your mom's Pinterest and your sister's Snapchat, that June 24, 2016 was the day Bernie became a BOUGHT-AND-PAID-FOR-SHILLARY-FOR-HILLARY. Or wait, is that what happened?

Is Bernie selling his soul to the greatest criminal mastermind in American history, who emailed four dead Americans to Benghazi while Whitewatering Vince Foster with LIES, LIES, SO MANY LIES? Or is that just something your Republican dad believes? (Dear old dad, awwwwww.)

Nah. That is not what happened. Bernie Sanders is and always has been a really fuckin' smart guy who loves this country and knows that, well hell, if it's not gonna be him, it should be #ImWithHer, because have you SEEN Donald Trump the moron racist with the tiny brain and the even tinier wherevers? (Hands, we mean hands.)

So! Bernie will be voting early and often for Hillary Clinton in November, because we have a "Donald Trump" to beat. And so should you! (PFFFFFT, we are only saying that because we are in the tank. And also because we love America, just like Bernie does.)

UPDATE: So, like, Bernie was on the "Morning Joe," and he said all that shit, ayup, he sure did. But then he went over to CNN, and Chris Cuomo asked him the same question, but in a different way. Here is what happened:

CUOMO: When the day comes in November and Sanders has to cast his vote, to whom does it go?

BERNIE: In all likelihood, Hillary Clinton.

CUOMO: When you say all likelihood, what percentage?

He's still going to end up endorsing her.