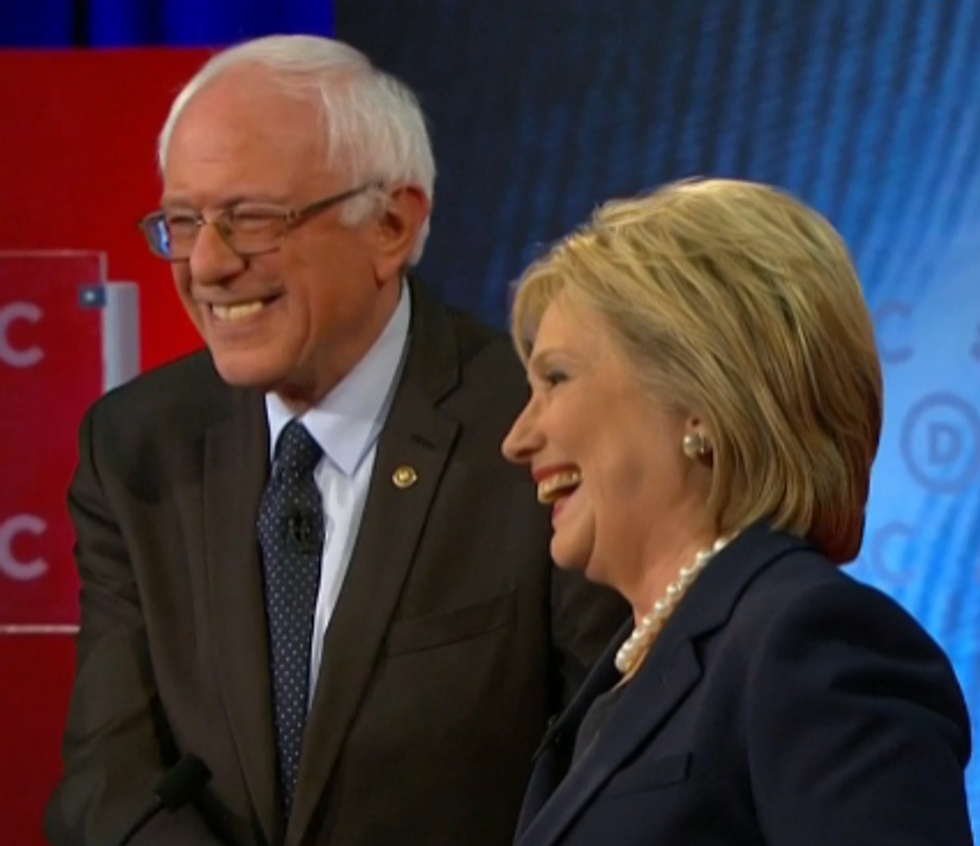 MOMMY AND DADDY LOVE EACH OTHER AGAIN!!

Well, well, well, the time has come. Sources named Bernie Sanders said in an interview Thursday that "We have got to do everything that we can to defeat Donald Trump and elect Hillary Clinton." And by EVERYTHING, he means EVERYTHING. That involves voting and making phone calls, and then voting in the place of a dead person (kidding!) and then 'splaining to your on-the-fence neighbor who can't stand Trump but somehow thinks Hillary's emails mean she is a criminal, how that is not true. And why should we do that? Tell us, Bernie:

"I don’t honestly know how we would survive four years of a Donald Trump ... "

SO NOTED. So is an official endorsement about to happen? It would appear that way! The Huffington Post reports that Hillz and Bernie will do a rally together in New Hampshire on Tuesday! Bernie will say, "I didn't give a damn about your emails when we were running against each other, and I don't give a damn about them now!" And Hillz will say, "You had some really great ideas, like the free college thing, and I am trying to work some of those things into my plans, so all the Democrats can get back to blowjobs, candy canes and defeating Donald Trump!" And Bernie will reply, "I like candy canes! They are cunning in their use of stripes!"

[wonkbar]<a href="http://wonkette.com/603357/bernie-sanders-is-bought-and-paid-for-corporate-sell-out-shillary-for-hillary-now"></a>[/wonkbar]OK, where were we? Oh yeah, endorsement. So that's probably happening Tuesday, unless Bernie decides to pull a GOTCHA! like he did in June, when he said he was voting for Hillary, but then like one hour later he was like "Yeah PROBABLY, no promises," just like Donald Trump was like "Yeah PROBABLY" about whether he'll serve as president if he's elected.

[wonkbar]<a href="http://wonkette.com/603764/hillary-clinton-bernie-sanders-student-debt-college-tuitions"></a>[/wonkbar]So what tipped Bernie over into Hillary's green pastures? The "free college for most" thing? Maybe so! Or maybe it's that the Democratic Party platform is likely to include some very nice Bernie-esque things like support for a $15 minimum wage. Or maybe Bernie is just an overall mensch and smart guy who means it when he says a Trump presidency would be a dumpster fire of epic proportions.

As for Bernie's supporters, they're coming around, and his endorsement will help that along quite nicely. Oh, a few dead-enders are going apeshit over the FBI's decision not to murder Hillary Clinton in her crib over "emails," but they're not the majority.

So hooray, put it on your calendars, for Tuesday is the day mommy and daddy are getting married again, WITH VOTES.