Yes, that is a giant blow-up of Trump's Twitter.

Want to see something awesome this bright and cold Thursday morning? WELL HERE'S A THING! So, you know the Senate has been debating Obamacare, and whether we should repeal it and replace it with nothing at any time ever so a lot of people die (Republican plan), or whether we should tweak it and do fixes to it to make sure even more people get better coverage at better prices (Democratic/human plan). So Sen. Bernie Sanders decided to trot out onto the Senate floor Wednesday afternoon in order to eviscerate Republicans and their leader Donald Trump, and he did it with his words, and also with a gi-normous, blown-up Donald Trump tweet from back in 2015, when Trump PROMISED he would not cut Social Security, Medicare or Medicaid. See, it's right here: 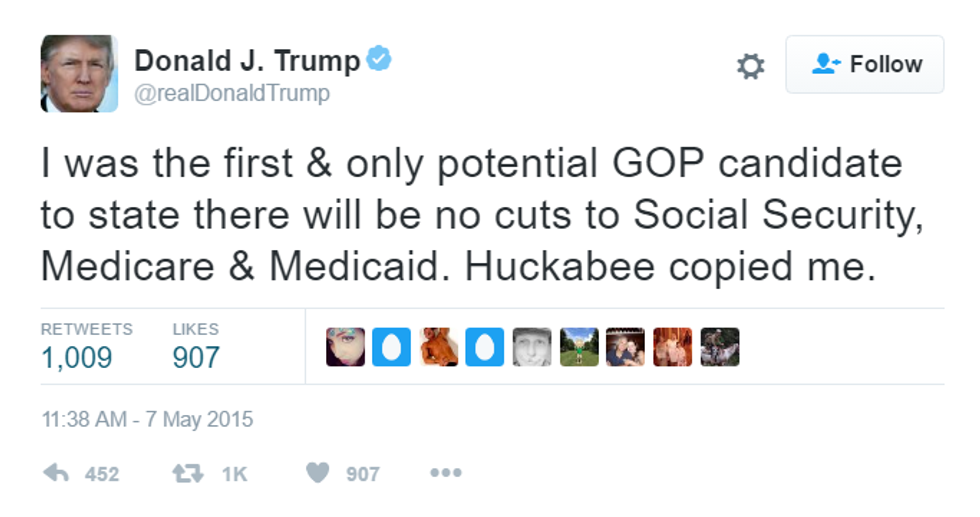 Bernie quoted that tweet, and another tweet, and other things that have come directly out of Trump's mouth hole on Medicare, Medicaid and Social Security, and then issued this challenge:

Millions of people voted for him on the belief that he would keep his word [...]

If he was sincere, then I would hope that tomorrow or maybe today he could send out a tweet and tell his Republican colleagues to stop wasting their time and all of our time. And for Mr. Trump to tell the American people that he will veto any proposal that cuts Medicare, that cuts Medicaid or that cuts Social Security.

Bernie also said that if Trump was lying (he usually is) he needs to Tweeter out to the universe about what a liar he is and how he only said all that shit to dupe people into voting for him.

Donald Trump Would Never Tell Businesses What To Do, Except All The Time

If Devin Nunes Doesn't Get To Play Outside Soon, He Might Just Sue A LIVE COW