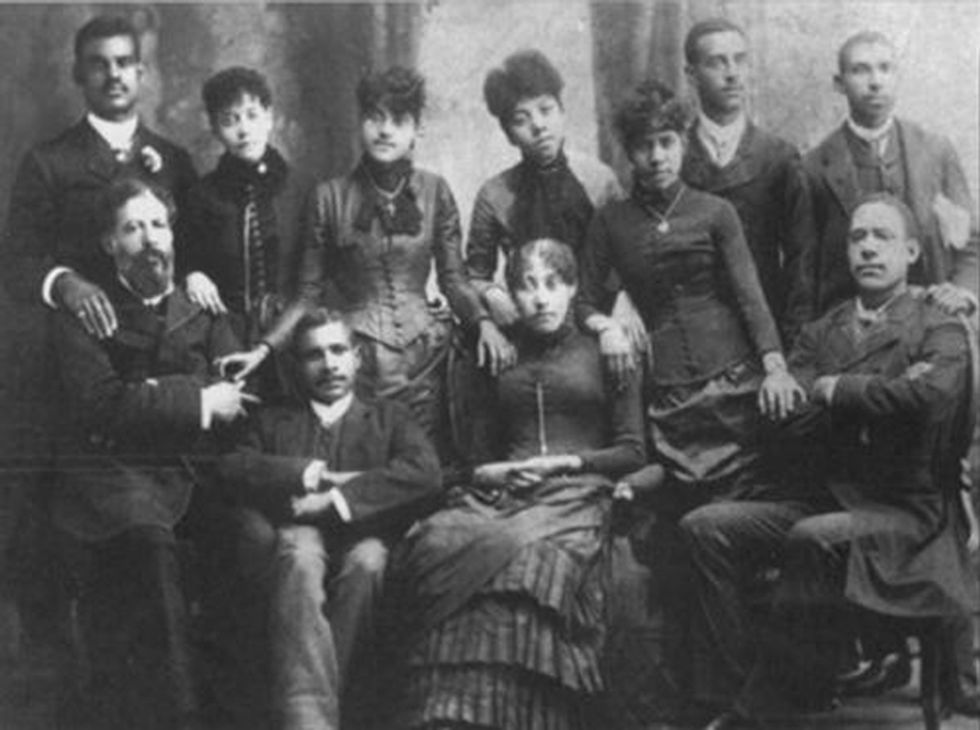 Secretary of Education/Avant Garde Performance Artist Betsy DeVos joined Donald Trump to meet leaders of several historically black colleges and universities Monday, then sent out an incredibly tone-deaf press release to mark the meeting, explaining how the legacy of segregation in higher education actually helps make a powerful argument in favor of school choice. It's really quite obvious, after all, since the founders of black colleges and universities were simply exercising their freedom of choice, hooray! Just look at this thing:

You see, the really great thing about HBCUs is that their founders saw an educational need in the marketplace and then responded to it. DeVos says that, for some reason she doesn't mention at all, there were "too many students in America who did not have equal access to education." So the founders of these institutions -- no doubt plucky entrepreneurs who all read Ludwig von Mises before he'd even written anything -- took action without leaning on the government:

They saw that the system wasn’t working, that there was an absence of opportunity, so they took it upon themselves to provide the solution.

Isn't the free market a wonderful thing? It can even overcome segregation, it's such a fine system. And wouldn't you know it, those plucky entrepreneurs who founded HBCUs

are living proof that when more options are provided to students, they are afforded greater access and greater quality. Their success has shown that more options help students flourish.

So sure, maybe there was some segregation, but just look at the wonderful legacy left behind in the form of these historic, much-loved schools, which offered more educational options to people who, by law, had no other options. If that's not a stirring argument for school choice, then maybe you don't understand the idea of "choice," like journalist Ron Fournier and Missouri Sen. Claire McCaskill:

Later in the day, DeVos took to Twitter to attempt some damage control, not that it was especially effective:

Oh, look! Someone reminded her of context! So the great things about private HBCUs is that they did such a great job of providing choice, in a time when they were the only option under separate but equal, and isn't that a wonderful thing?

Sundays With The Christianists: American History Textbooks For Children In Peculiar Institutions

Still, DeVos could have done worse, like the publishers of that fine American history textbook for homeschoolers that said slavery was a shame and all, but at least it brought a lot of slaves to Jesus and they wrote some lovely spirituals as a result:

To help His children endure the difficulties of slavery, God gave the Christian slaves the ability to spiritually combine the African heritage of song with the dignity and power of Christian praise. Through the Negro spiritual, the slaves developed the patience to wait on the Lord and discovered that the truest freedom is freedom from the bondage of sin. Today, the spiritual is recognized as America’s greatest contribution to the field of music.

We should add that's from a textbook with a 2006 copyright on the most recent edition, for reals.

Makes DeVos almost seem radically forward-thinking by comparison, at least until you remember she wants tax money to pay for kids to attend private schools or home schools, where our tax dollars can support the teaching of similar great thoughts. That would be a real achievement for school choice, and would bring the history of school choice back to its roots, when "private academies" (more honest people called 'em "segregation academies," though not officially) sprung up all over the South and elsewhere to accommodate white parents who didn't want their kids going to integrated public schools. All we need now is a Betsy DeVos press release praising those educational pioneers for providing more options for quality education, too.

You have the "choice" to not see any ads, and support Wonkette. YOU WILL DO IT NOW.