Betsy DeVos Wanted To NOT Screw Transgender Kids? The Fuck You Say? 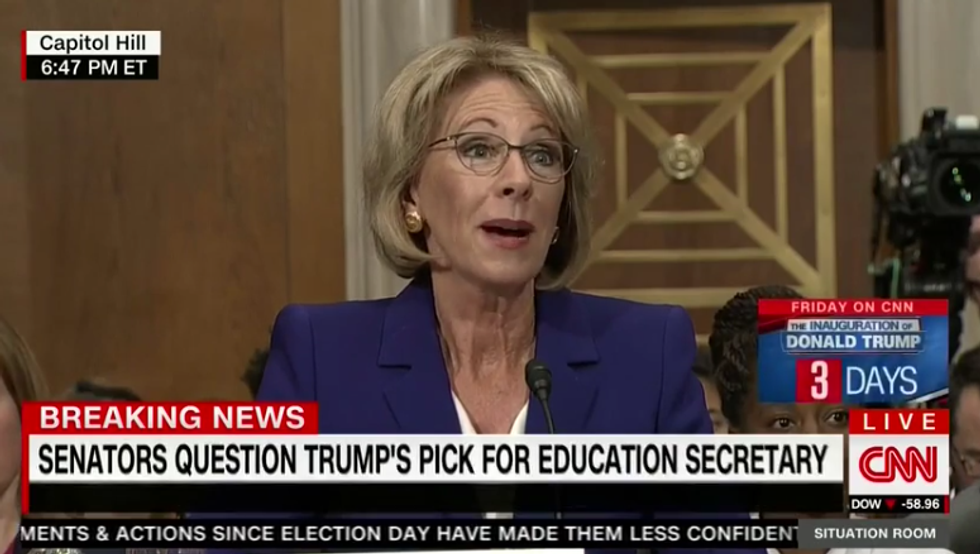 Maybe she has a soul.

File under: WHOA IF TRUE. There have been rumblings that the Trump regime is about to do an executive order reversing all the nice guidance the Obama administration issued for transgender kids, guidance that said they should be allowed to pee in the bathroom that matches their gender identity, and basically that they shouldn't be discriminated against in school. Because Donald Trump is a piece of shit and has to erase anything that says "Obama" on it with his stained orange mini-hooves, this must be done!

But the New York Times reports that it's caused some trouble in the regime, because such an order has to come both from the Justice Department and the Education Department. Clearly, Attorney General Jeff Sessions, Alabama hick baby from hell, wants to rescind Obama's guidance, because he's a RAGING pig-ignorant bigot. But it turns out that crazy right-wing evangelical idiot billionaire Secretary of Education Betsy DeVos ... did not want to go along with it? Like we said, WHOA IF TRUE.

Tell us about Betsy DeVos being nice and then backing off like a coward, New York Times:

A fight over a draft order that would rescind protections for transgender students in public schools has erupted inside the Trump administration, pitting Attorney General Jeff Sessions against the secretary of education, Betsy DeVos.

Ms. DeVos initially resisted signing off on the order and told President Trump that she was uncomfortable with it, according to three Republicans with direct knowledge of the internal discussions. [...]

Mr. Sessions, who strongly opposes expanding gay, lesbian and transgender rights, fought Ms. DeVos on the issue and pressed her to relent because he could not go forward without her consent. [...]

Mr. Trump sided with his attorney general, these Republicans said. And Ms. DeVos, faced with the choice of resigning or defying the president, has agreed to go along.

Reportedly, the draft of the order says the Obama guidance has to be rescinded because it's too confusing, and there are all these bigot states filing suit against it, because they're human trash who want LGBT kids to be bullied. But the Times says the letter also includes a line that says, "Schools must ensure that transgender students, like all students, are able to learn in a safe environment,” and apparently DeVos was the one who pushed for that line. How weird! Like, what made Betsy DeVos get up on the smart, compassionate side of the bed on this issue, and can we encourage her to do it more often?

[wonkbar]<a href="http://wonkette.com/600934/donald-trump-doesnt-care-where-you-pee-as-long-as-your-stream-is-tremendous"></a>[/wonkbar]Trump wasn't always a dick on trans rights, of course. He said last year that North Carolina's trans-hatin' HB 2 law was real dumb, and he personally gave Caitlyn Jenner permission to whiz wherever she wants in Trump Tower. But now he, pushed by his yokel-ass attorney general, has decided it's a "states' rights" issue, because apparently the circumstances of trans people answering the call of nature vary widely, depending on whether you are in Alabama or California.

So that's where that issue is. Look for a trans-hatin' order from the Trump regime any minute now!

But seriously, though, what's up with Betsy DeVos being nice? Did she have a stroke? We hope she did not have a stroke, and that this just means she, despite reports to the contrary, has two brain cells to rub together. (PFFFFFFFFT.)

Wonkette is entirely reader-supported, so if you liked this post, throw us some dollars, OK?