Better Than The Bolshoi, Deeper Than Roots, It's Bristol Palin's Teevee Show Or Whatever 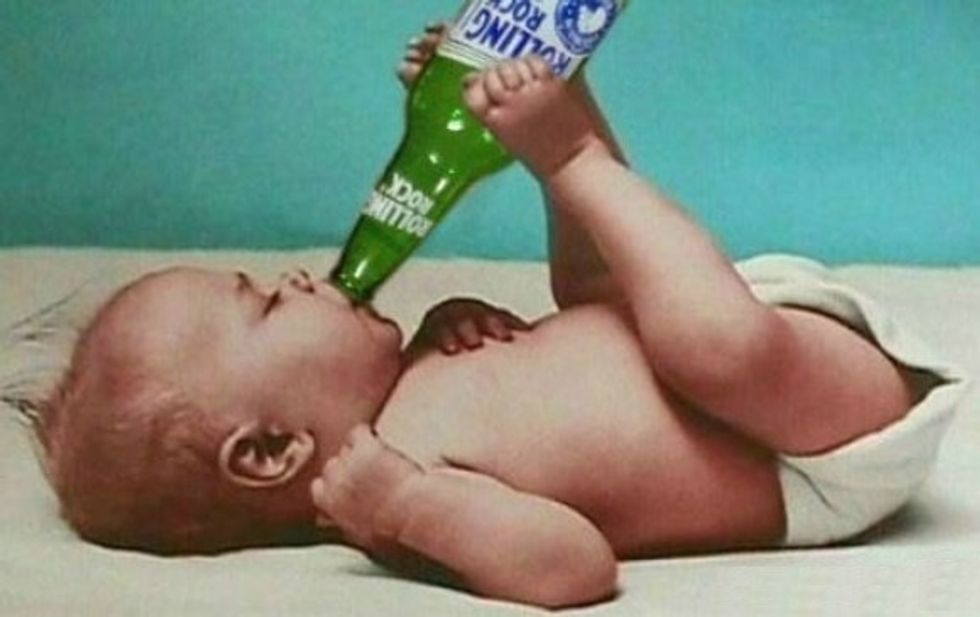 OMG OMG OMG YOU GUYS Bristol Palin's reality show Life's A Tripp is starting any second on Lifetime! The reviews have not been "the greatest" so far (lamestream media). Like this, from theChicago Sun-Times!

What we’re left with are Bristol and Willow shopping, squabbling and engaging in vapid conversations. In other words, the Alaskan Kardashians.

And neither have the promos! They all show this, because apparently that is the only "exciting" thing that happened in the whole season.

Boy is this going to be SO GREAT.

9:55 PM -- Oh here is your TMZ reading assignment: "Former Disney star Kyle Massey" (???) is suing person or persons unknown (but not Bristol) for cutting him out of the show, which he claims he came up with.

In the suit, filed today in federal court in L.A., the Massey brothers claim they met Bristol on "Dancing with the Stars" ... and developed the idea for a show in which the brothers help Palin meet the challenges of child rearing while adjusting to life in L.A.

In fact, the Masseys claim they had even picked out a name for the show -- "Bristol-ogy 101."

But according to the suit, a producer named David McKenzie hijacked the project, cut the Masseys out of the show and repackaged the program as "Bristol Palin: Life's a Tripp" ... which is set to premiere tonight on Lifetime.

The Masseys are demanding a ton of money -- claiming they were guaranteed $500k to star in the show ... PLUS they want even more cash for coming up with the idea. The brothers also want a judge to shut down "Life's a Tripp" as soon possible.

Now that we are all up to speed, let us enjoy "Life's A Tripp" while we can!

10:04 PM -- There is a girl with blue hair. This is going to be hard to figure out, we think. We have cracked the champagne because we are out of everything else. Bristol seems to be yakking about something, because opening credits.

10:06 PM -- A baby is something that needs attention seven days a week. THAT IS GOOD TO KNOW YOU GUYS. "It's really hard being a single mom." ALSO GOOD TO KNOW.

10:11 PM -- Oh right, there is an Adventure Arc, wherein Bristol (and au pair/slave Willow) move to Hollywood, you guys! It's like the Odyssey, and stuff.

10:14 PM -- We don't know how to tell you this, but Sarah Palin just conveyed a pile of common sense. Sarah Palin does NOT think it is appropriate to quit your job via text message! And that is the last time we will ever agree with Sarah Palin.

10:16 PM -- And we meet Gino. And within one minute we are slaughtered by the force of his terrible personality. And, we will just say it, EVEN BRISTOL PALIN does not deserve this total piece of awesome dude. We are sorry, Bristol. Run to LA! RUN! LA dudes are mostly horrible, but at least (apparently) they're not fucking Alaska.

10:20 PM -- Commercials! What do you think, Wonkette commenter AngerBear?

Balancing shopping, texting, snacking, occasionally glancing over at Torp, texting, quizzically poking at her chinplant, staring vacantly and texting must be such an ordeal for a young lady on a strict(ly unlimited) budget. How does she do it all? She is so brave.

10:26 PM -- "Thank God Willow is here to be my au pair/slave so I can go out to the bull-riding bar because of how I am a teen mom who never gets to go out except all the times I go out."

10:29 PM -- Right so that just happened. "Your mom is evil. Your mom is a whore." "Is it because you're a homosexual?" And that, ladies and gentlemen, is why these fuckers need to just secede already, and Abraham Lincoln should have let these bitches go. We are different peoples, we speak different languages, and some of us believe Jesus rode dinosaurs.

10:36 PM -- And Bristol is sad, and she is 21 years old, and you could see why that would be hard. But already she has learned the lesson about "curating" reality, so that the guy (who was terribly rude: that was rude; yes it was) only hates her mother "because she's against gay marriage," and Bristol is having trouble getting privacy because of "cameras and paparazzi" -- that she herself has hired. And all of that goes unmentioned, and she seems to have no idea of the vile hatred her mother has specialized in throwing out, only that which has been flung back at her. And maybe we're all like this, or were more like that at 21, and at least this is more interesting than a fucking strip-club-store shopping spree on Hollywood Boulevard.

7:50 PM -- And here comes our second bit of drama, per the NYT story linked above: Bristol has come down to LA to "work" (volunteer) with Help the Children. And she goes to Skid Row, and Skid Row is fucking serious you guys. In fact, Skid Row is a disgrace. And others are ragging on Bristol for not having gotten out of the car, and we are here to tell you: No. There is no reason Bristol Palin should have gotten out of the car on Sixth Street in downtown LA. You can suss it out from the inside of your vehicle. It is Nightmarelandia, and seeing it is enough to make an impression. And we promise that is true.

10:56 PM -- Willow's hair is a completely different color than the last scene. So what scene was filmed out of order for the producers? We will never know.

10:57 PM -- "Do you realize that as a mom I will have to find a whole new slave if you leave? How is that fair to me, as a mom, not to have a slave at all times? Who is 17 and apparently unencumbered by school?" It's almost over, dudes. Almost there.

11:03 PM -- Man, Sarah Palin really does not want her 17-year-old daughter, Willow, to come home. Because she is the best mother in history. Also, her children love her a lot and don't at all hang up on her for being a cow.

11:06 PM -- Oh right, forgot about the baby. That is some Olympic-level guilt-tripping Bristol is laying down on her 17-year-old sister about how the baby (Bristol's baby) has no one. Especially Bristol. These people all need to go to family counseling. Also, Willow needs to move to Austin and become a lesbian homosexual. And good for her for rejecting the awesome YOU MUST RAISE MY BABY her sister just laid down on her before she asked WHAT YOU THINK I SHOULD JUST HIRE SOMEONE OFF THE STREET? Yay, Willow has boundaries!

11:10 PM -- Hooray, the perfect, golden Aryan baby is back! Hello, adorable! It is good to see you for the second minute in this hour-long show that bears your name. Sorry Bristol Palin is your mom.