Big Oil: All Your Tax Dollars Are Belong To Us 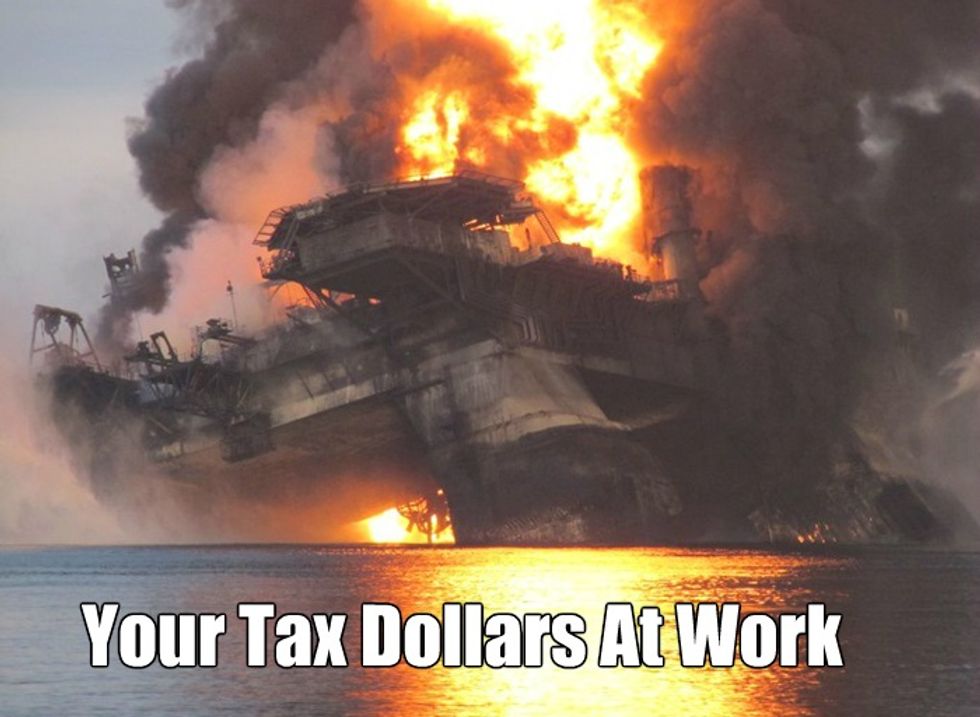 This post supported by a grant from the Patty Dumpling Endowed Chair for coverage of oil spills, pipelines, fracking, and subsidizing our own demise via Global Warming

Just in case you were wondering, America is still shoveling huge amounts of taxpayer money at fossil fuel companies, because without tax incentives, the poor dears would be unable to turn a profit. Or at least, unable to pile up higher record profits. And we'd never have any jobs ever again! Or something. The Guardian brings us a fun investigation of just a few of the wonderful ways in which the world's richest corporations are receiving big taxpayer bucks -- and would you believe the subsidies for each of the three projects they looked at just happened to be pushed by politicians who received nice fat campaign contributions from the oil industry? You would? Gosh, that's pretty cynical of you. Keep it up.

Using a nifty little "Subsidy Tracker" tool from the advocacy group Good Jobs First, The Guardian took a close look at several lucky duckies that have been getting nice infusions of corporate welfare:

Even more amazingly, not one of the oil companies has had to pass a drug test or face careful scrutiny of the items in its shopping cart. If Exxon-Mobil executives want some crab legs, then by golly, maybe we should be giving them more, to reward their hard work.

And are these big subsidies the result of the oil companies' wise investment strategy in Politician Futures? Could be! In Pennsylvania, Shell's building that $4 billion plant with a generous tax credit of $66 million a year, for the next 25 years, which is a pretty good return on investment. The oil and gas industry contributed over $1 million to the campaign of then-Gov. Tom Corbett, who helped set up the tax breaks but went and lost his re-election bid in 2014, which seems ungrateful of him.

In Louisiana, where the entire state government is a wholly-owned subsidiary of the oil and gas industry, The Guardian notes that Exxon-Mobil's refinery in Baton Rouge has received generous tax exemptions worth nearly $119 million, and as it happens, the industry also gave plenty to Gov. Bobby Jindal, with total contributions of more than $1,019,000 over 10 years. Gov. Jindal is also pretty fed up with that Barack Obama fellow, who denies the simple scientific fact that fossil fuels make us happy and safe and warm. Very, very warm.

And then there's Ohio, where Marathon Oil has received a whole bunch of "job creation" tax cuts, totaling $78.5 million over 10 years -- a pretty nice return for oil and gas industry contributions to Gov. John Kasich, who was 2011's top recipient of fossil-fuel industry donations, receiving $213,519 that year alone. Kasich loves Marathon right back, and considers the tax incentives almost too piddling to worry about, really, saying "I think Marathon always wanted to be here ... All we’re doing is helping them.” Not that he'd ever cut the tax incentives.

The reporters also sought comments from each of the oil companies; while Shell and Marathon spokespeople offered the usual boilerplate arglebargle about the joys of private-public partnerships and jobs, jobs, jobs, Exxon-Mobil decided to go Full Pissypants, because The Guardian has been treasonously pushing for nonprofits to disinvest from fossil fuel companies and aggressively calling attention to the science on climate change:

A spokesman for ExxonMobil said: “ExxonMobil will not respond to Guardian inquiries because of its lack of objectivity on climate change reporting demonstrated by its campaign against companies that provide energy necessary for modern life, including newspapers.”

GOTCHA! Don't go criticizing big oil until all your own computers and printing plants run on solar cells and your dumb liberal papers are delivered by dolphins, you dirty hippies. And now The Guardian needs to buy an acre of rainforest to offset the CO2 from that burn.

Mind you, not everyone sees the obvious utility of subsidizing the companies that are helping to make the planet unlivable; Sen. Bernie Sanders and Rep. Keith Ellison have introduced the "End Polluter Welfare Act," which would eliminate $135 billion in subsidies to the fossil fuel industry over the next decade. Sanders and Ellison wrote, in support of their bill,

At a time of rising global temperatures and increasing threats to our nation’s social safety net, it makes no sense for Congress to continue giving away taxpayer money to the highly profitable and highly polluting fossil fuel industry.