Bill Clinton Sorry He Put Everyone In Jail 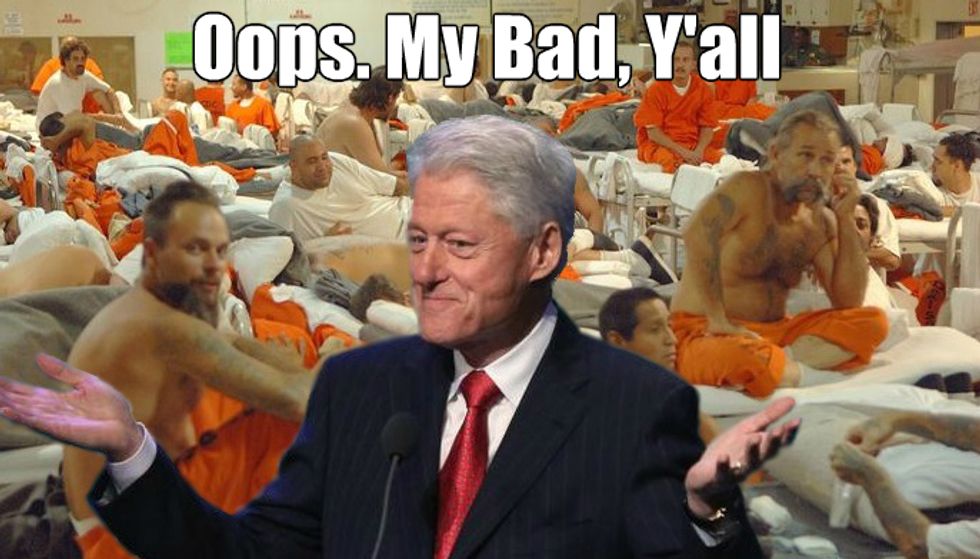 President Bill Clinton would like you to know he feels kind of bad now about some of the unintended consequences of the 1994 Crime Bill he signed, like the "three strikes" provision and some other stuff that led to prison overcrowding. Honestly, nobody could have seen it coming, except maybe all the progressives at the time who predicted the law would fill up the prisons with nonviolent drug offenders, and nobody cared much because who wants to be called soft on crime?

In an interview with Christiane Amanpour on CNN, Clinton admitted the law had led to excessive prison sentences and mass incarceration (not to mention a booming private prison industry), but his intentions were good:

"The problem is the way it was written and implemented is we cast too wide a net and we had too many people in prison," Clinton said Wednesday. "And we wound up...putting so many people in prison that there wasn't enough money left to educate them, train them for new jobs and increase the chances when they came out so they could live productive lives."

And of course, it probably didn't help that a lot of the crime-prevention measures that didn't involve Getting Tough were largely dropped from the bill, mostly due to conservative mockery of "midnight basketball," which was just silly when Democrats supported it, although the idea of community recreation centers as a means of keeping youth out of trouble had of course been paised just a few years earlier as one of George H.W. Bush's "thousand points of light." See? This crap didn't start with Obama and the ACA! We feel so much better about that.

In any case, Bill is now in agreement with Hillary on the need to fix the justice system, again, to emphasize something other than just filling up prisons. Last week, Hillz said, "Keeping them behind bars does little to reduce crime, but it does a lot to tear apart families ... Our prisons and our jails are now our mental health institutions."

Now that Bill has agreed the '94 Crime Bill was pretty awful and needs to be fixed, maybe we can hope he'll finally apologize and support fixing some of the other things we progressives were pissed at him for in the '90s, like repealing Glass-Steagal (Hello, 2008 investment crash!) and turning the welfare system into an endless gauntlet of shame-the-poor measures with the 1996 Welfare "reform" law that mostly just guaranteed life employment for an army of caseworkers whose main job was no longer to do social work, but to find excuses to kick people off public assistance.

But he's not going to apologize for the beej, and we're completely OK with that, the end.