Bill O'Reilly And Sarah Palin Engage In War Of Wits. Both Lose 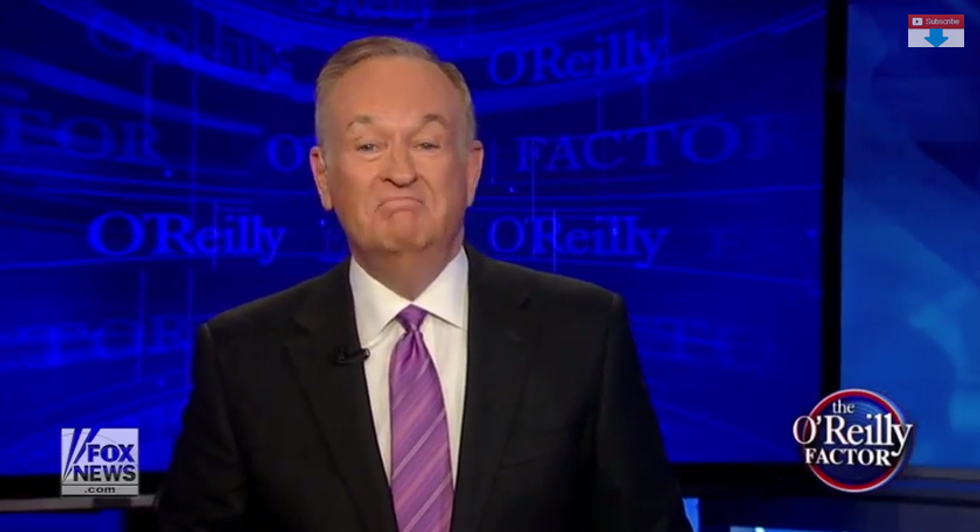 Who would win a battle o' the brains: Bill O'Reilly or Sarah Palin? Ha, that's a trick question because the correct answer is "Who cares? Just pass the popcorn!"

The other day, Bill O'Reilly, winner of all the Very Serious Journalism awards, reported that lol, a bunch of doofus idiots are pretending to maybe run for president in 2016, like Sarah Palin and Donald Trump and Chris Christie, who apparently is as absurd a maybe-candidate as Palin and Trump, though we're not sure how that works since Christie at least has a real job, but OK, why not?

"Wow!" O'Reilly's script-writers zinged for him. "Talk about a reality show!"

Sick burn? Nah, not even a mild case of "Oooh, that's a tad warm." But it was enough to make Sarah Palin toss some word salad at Sean Hannity about that, hmmmph! She is TOO also seriously too considering of thinking about being for running maybe in 2016 of president if god is of maybe shoving her through that window pitbulls lamestream media lipstick burp. Oh, and another thing that's wrong with America also too? Fox News.

Oh Fox, a quasi or assumed conservative outlet and we have all day listening to the tease of Bill O'Reilly's. He's talkin' about the guests on his show tonight, or the commentary on his show, and that would be, oh, all these GOP contenders thinking about running for president, like Donald Trump, Sarah Palin. And he names 'em off, and he says, "Oh, what a reality show that would be, yuk yuk."

Well, the left doesn't do that, OK? They take this serious. Because this is WAR. And hopefully the media, even the quasi right side of the media, won't be looking at this as some kind of reality show, a joke, because they have theirs, so they're taken care of fine. No! People of America deserve the best, and competition through a GOP primary, whether a Bill O'Reilly or somebody else assumes it's a reality show or not, they deserve that competition to surface the competitor who can take on Hillary, or whomever it may be, and win for this country.

Actually, we on the left yuk yuk at the Palin family ALL DAY LONG. It is our favorite thing, basically.

Now, at this point in the competition, we'd have to say that Sarah Palin is surfacing as the competitor who can beat O'Reilly or whomever on account of how she used all those words to learn him and his dumb quasi conservative network Fox, which, yes, is the same network on which she is saying all of those words, so what?

But what say you, Bill?

"Apparently, Gov. Palin took offense," he smirks because he SO does not care if she took offense, in fact, it sure seems to excite him at least as much as Middle Eastern snack foods. Splain it at her, Bill, for the maybe-win, and use real small words real slow, please, so she and the rest of your near-dead audience can follow along:

So here's the deal. In TV Land, where I live, you tease upcoming segments with flamboyant descriptions so people will sit through the 18 minutes of commercials and watch it. That's what we do! Miss Palin and Donald Trump are very high-profile folks. And both have starred in reality TV shows! Thus my tease was perfectly in context and harmless.

So here's the tip of the day: If no offense is intended, don't take offense. Your life will be happier.

Thanks for the tip! We're inclined to declare Bill O'Reilly the winner, on account of how he makes some points that are a) true, and 2) coherent. But nah, he is Bill O'Reilly, so he loses all the points for being Bill O'Reilly. Final score? They are both losers, yuk yuk.