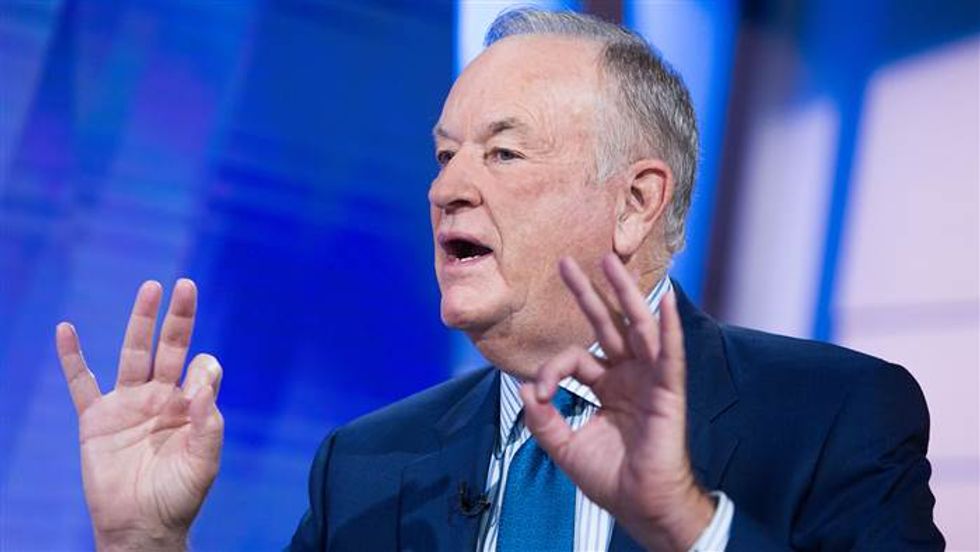 Bill O'Reilly swung by the Today show this morning, and, in exchange for getting to promote his new "history" book "Killing England," engaged in a chat with Matt Lauer about his ouster from Fox and the sexual harassment charges what wrought it.

Perhaps unsurprisingly, O'Reilly denies everything in the interview, and is convinced that Fox gave him -- their cash cow -- the boot only because Media Matters launched a boycott against him.

WATCH: “This was a hit job. A political and financial hit job.” @billoreilly’s full interview with @MLauerhttps://t.co/btlpOQFXzR

“If you look at the totality, this was a hit job — a political and financial hit job,” O'Reilly explained, referring to sexual harassment accusations dating back to at least 2004 when former O'Reilly Factor producer Andrea Mackris filed the famous Falafel Lawsuit against him. You know, the one where he is on tape talking about how badly he wants to rub a falafel all over her body, and also the size of his penis and how excited all the girls in Thailand were about it? And many other gross things?

Not to mention Fox's former Happy Hour host Rebecca Gomez Diamond, who also filed a sexual harassment suit against O'Reilly in 2011, and also provided recordings of him saying gross things to her, and received a settlement. And the $13 million Fox paid out to women who were sexually harassed by O'Reilly during his tenure there.

None of that ever happened, claims O'Reilly, he never did anything wrong or treated any woman inappropriately! All of these sexual harassment lawsuits are part of a 13-year plan, concocted by Media Matters and, we suppose, the world's greatest Bill O'Reilly voice impersonator, to eventually get a boycott of him going in the year of our lord 2017, resulting in him losing his show on Fox.

O'Reilly also explained that "lots" of people were named in these various lawsuits, not just him, and that this was all fallout from the sexual harassment accusations against Roger Ailes. Which, let us remind you, O'Reilly also claimed were imaginary.

Matt Lauer attempted to push back at several points in the interview, noting that these lawsuits had all been filed over more than a decade, and that Fox had paid a ton of women off, but O'Reilly stuck to his guns and insisted his lawyers were putting together his side of the story. He also directed viewers to a website where they can see that one of his accusers was later in trouble for filing a false police report. Lauer asked if it were possible that "both things could be true" -- that he could have sexually harassed a woman who later filed a false report about something else -- and O'Reilly responded that he wanted people to make up their own minds about that.

I'm just gonna point out here that if this were, indeed, a "political and financial hitjob" it was a terrible one. What? Is Media Matters The Count Of Monte Cristo or some shit? They take thirteen whole years to enact their revenge on poor, innocent Bill O'Reilly for no reason whatsoever? That is really bad. Especially considering that O'Reilly's ex-wife must have also been in cahoots with them, given that she claimed he threw her up against a wall when she caught him having phone sex.

Lauer asked him if this was all part of a vast left-wing conspiracy against him, and he laughed it off. Although if he's sticking to his story, what else could he possibly think it was?

Given that the interview on the sexual harassment charges was given in exchange for letting O'Reilly promote his new book, "Killing England," Lauer eventually pivoted to that. According to O'Reilly, it's a very important book right now, on account of how "the left" is trying to erase all of the history by not letting schools in Texas be named after George Washington.

Allow me to point out here that no such thing happened in Texas. The schools considering name changes in Texas are those named after Jefferson Davis and other confederate generals. One school in San Francisco last year considered changing the name of George Washington High School to honor someone who didn't own slaves, and the only other similar incident I can find is one from 1997 in which a school named after Washington changed its name for the same reason. That is 20 years ago! I did the math!

Of course, what can we expect from someone who clearly gets all of his historical knowledge from statues and the names of elementary schools.

O'Reilly then noted that it is important to keep these school names, on account of the fact that "most people" don't know who George Washington even was. Which seems like a thing that might not be true! My elementary school was named after John F. Kennedy, and I was 100% aware, even as a child -- hell, even as a child coming from a family that was half made up of Irish Catholics from New England -- that there were presidents other than John F. Kennedy.

Clearly, Bill O'Reilly lives in a topsy-turvy world in which a loofah is a falafel, he's never had any HR complaints, non-profit media watchdogs conduct 13-year vendettas on random Fox News dudes for no apparent reason, and no one has ever heard of George Washington. Perhaps instead of coddling him with interviews and chances to resurrect his career and promote his books, we let him simply remain in that world, alone and unloved, as he so deserves.

Surely we deserve a dollar or two for having to think about Bill O'Reilly's sexual falafels again, don't we? Click the link to tip!