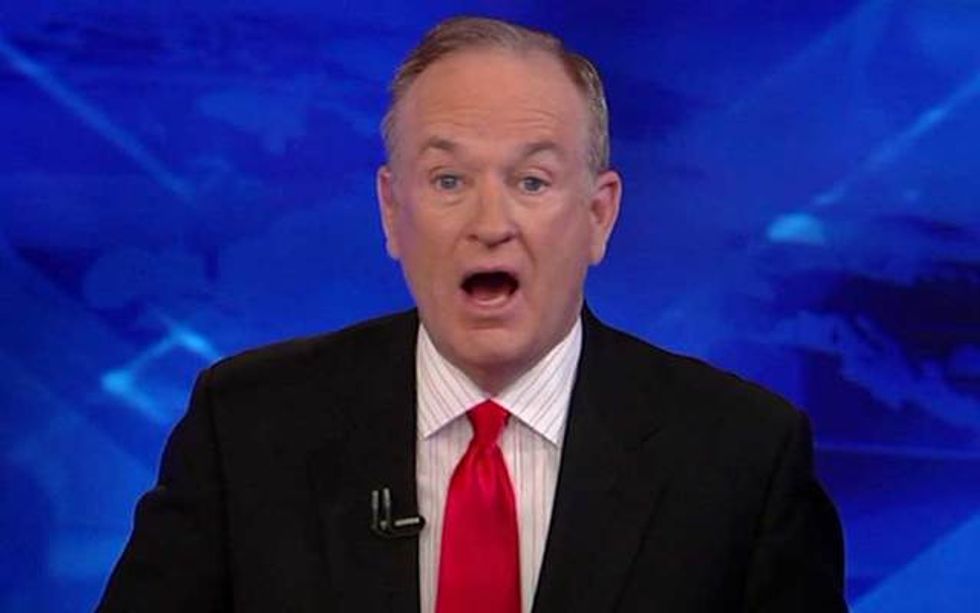 Aw, look! He wants to catch a stick!

With everybody talking about how he's a gross grabby old sexual harasser (allegedly) and advertisers avoiding his show like an Ebola buffet, Bill O'Reilly has suddenly announced he's going on vacation for some well-deserved R & R, not for any particular reason, because didn't you hear him say quite distinctly last night he's been planning this since the fall? Near the end of his Wednesday program, O'Reilly said he was simply taking a vacation like he does every year around this time, you betcha:

I often takes some time off around this time of the year. I grab some vacation, because it’s spring and Easter time. Last fall, I booked a trip that should be terrific. Not gonna tell you where it is, but we have a contest [online]... I'll have a full report when I return.

O'Reilly offered viewers a tip, even: Take a couple vacations every year, because "we all need R&R. Put it to good use." You could spend some time talking to your broker about retirement villas, or perhaps to an attorney to find places that have really good luxury properties and no extradition treaties. Fox News says O'Reilly will definitely be back April 24, although we haven't confirmed the spokesperson's fingers were not crossed.

If he's not back by the end of the month, we'll simply learn that he's still on a bus somewhere. Here's hoping he's not flying on the same plane Henry Blake took when he flew back from Korea, if you know what we mean and we think you do.

At New York magazine, Fox News expert Gabe Sherman, who wrote the book on Roger Ailes before Ailes was ousted last year, reports on scuttlebutt from Foxland, where there are rumblings that O'Reilly may not be coming back from vacation ever. Let's see what Sherman has for us in the way of Power Struggle News:

Fox News co-president Bill Shine has been working hard to keep O’Reilly, sources said. But O’Reilly’s future is in the hands of the Murdochs. “It’s up to the family,” the senior Fox News staffer said. The Murdochs are presently divided over how to handle it. Two highly placed Fox News sources say 21st Century Fox CEO James Murdoch would like O’Reilly to be permanently taken off the air, while his father, Rupert, and older brother, Lachlan, are more inclined to keep him. (A spokesperson for the Murdochs declined to comment.)

That dynamic — James pushing for swift action, while Rupert resists — played out last summer in the Ailes scandal. James, of course, got his way with Ailes. With more than three dozen advertisers boycotting O’Reilly, Fox staffers speculate the same may happen to O’Reilly, perhaps as early as during his vacation. “The assumption is that he’ll exit in a non-embarrassing way,” one senior Fox News staffer told me.

Bill O'Reilly is exactly as nice to work for as you'd imagine.

It would of course be premature to assume this is the end of O'Reilly. His advertisers may be disappearing more quickly than red-shirted ensigns on Star Trek, but his viewers remain loyal -- ratings are up since the New York Times revealed new harassment accusations -- and if Fox were to quietly nudge O'Reilly into retirement, chances are good the Twitter Flying Monkey Brigade would go nuts.

Perhaps after a chance to cool down a little, Mr. O'Reilly will get past all this. Sure, he's a bit of a hothead, and he likes the ladies, but there's certainly nothing to indicate he's an unstable psycho with a hair-trigger temper. Fox can depend on loyalty for this guy.

Yr Wonkette is supported entirely by reader donations. Will you help us keep Doing It Live? Click the "Donate" linky just below!