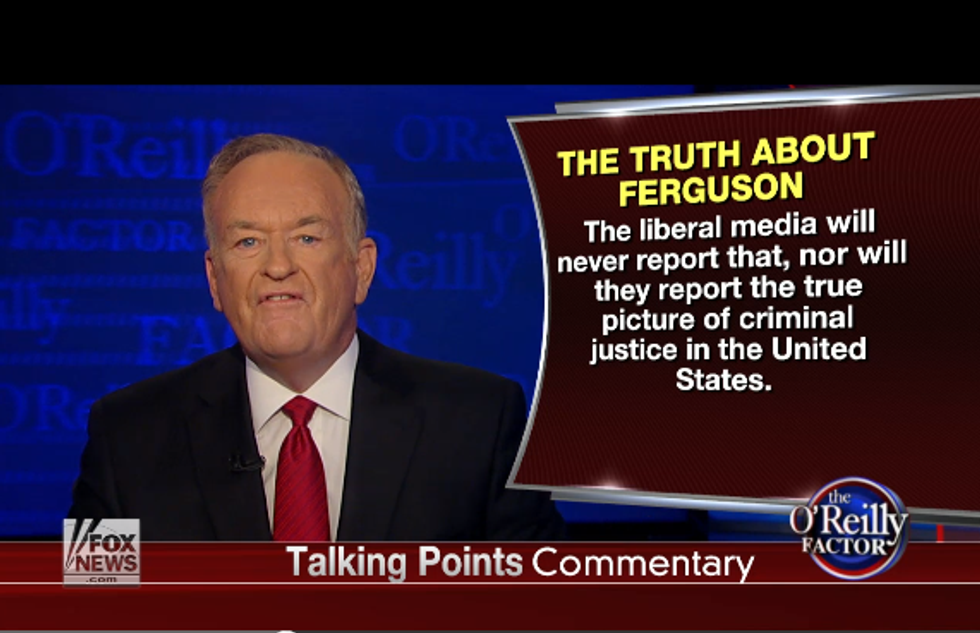 Bill O'Reilly took a break from sexphoning women with his fantasies of falafelling them in the shower, or whatever the heck he does for downtime, to let his viewers know he is "furious -- furious!" about the unfair and unbalanced media coverage of the killing of Michael Brown. And because every single person reporting on the shooting is failing to report The Truth About Ferguson, O'Reilly is here to set the record straight, and also to let you know just how much he despises Al Sharpton, because wow, does he really hate that guy.

Here are the Truths that you need to know, according to O'Reilly:

The feds should look into this case and their investigation should be transparent. That is Americans should get hard information as it comes out, which brings us to this video of Mr. Brown stealing from a convenience store and pushing the clerk around.

Ah yes, the video that proves Brown was A Thug is one of the pieces of hard information Americans should have in order to conclude that Brown totally had it coming when Officer Darren Wilson -- who, O'Reilly notes, "up until August 9th, had a very good record" -- killed him. No, O'Reilly does not note that up until that same day, Michael Brown's record was also clean as a whistle, but what does that have to do with anything? We're talking about why Michael Brown deserved to be shot, not why Officer Wilson shot him. Duh.

Agitators call the release of the video a smear against Michael Brown and his family. Further inflaming the situation, but facts are not smears and this goes to Mr. Brown's state of mind on the day he was killed. Americans have a right to know what happened leading up to the shooting. You don't suppress an important piece of information in a case like this when only one side of the story is being reported by the media, which is generally terrified of any racial situation.

Now, we hate to quibble with O'Reilly -- after all, we have never won Peabody Awards for our journalism, but then again, neither has he. But what exactly does Brown's state of mind have to do with Officer Wilson killing him? We are aware of the legal term mens rea, which refers to the state of the mind of a person who commits a crime -- say, the alleged crime of killing an unarmed teenager -- but we are not familiar with the legal theory that the state of the mind of the victim is relevant. But what do we know? Please proceed with your Truths, Mr. O'Reilly sir.

The people rioting and looting in Ferguson are dishonoring the memory of Michael Brown and his grieving family. They are insulting them. Again, flat out disgraceful. The Factor has been investigating those arrested. On Monday night, 78 people were taken into custody and we believe about 30 of them have criminal records. Only four, four out of the 78 are from Ferguson. Many of the others are trouble makers who just streamed into town, but the liberal media will never report that. Nor will they report the true picture of criminal justice in the U.S.A.

Excellent point! The thugs demanding answers and justice for the killing of Brown -- because they are all thugs, you know -- are definitely disgracing the memory of Brown, and the stupid liberal media will not even report on that, nor will the stupid liberal media show you what REAL CRIME looks like, which is why we have not seen the video of Brown allegedly robbing that store eleventeen trillion times.

O'Reilly is also dis-GUSTED that "race hustler" (drink!) Al Sharpton has the audacity to go to Ferguson and say "we have had enough" of cops killing black men, because what does that have to do with the story of a cop killing a black man, HUH?

See, Officer Warren was just being EFFICIENT when he tried, convicted, and personally executed Brown for the alleged crime of robbery, because that is how our justice system is supposed to work. DUH.

O'Reilly is also none too pleased that Michelle Bernard dared to distract us with the issue of race on MSNBC, saying, "There is a war on black boys in this country."

“Black boys being murdered?” In the context of Ferguson? Are you kidding me? The truth is that 91% of black homicide victims are killed by other blacks, 91%. Yet, that woman tries to mislead folks by accusing American law enforcement of shooting down young black men in the streets. It's beyond belief. What is going on in this story is beyond belief.

Seriously, what does race have to do with anything in the context of Ferguson? Just who does this Michelle Bernard person think she is, bringing race into this story that has nothing to do with race, while failing to mention the EXTREMELY relevant fact that some black people are killed by other black people, so obviously they are The Real RacistsTM?

Here's another thing race hustlers Al Sharpton and Michelle Bernard and the entire stupid liberal media is not reporting so you can decide:

We also hear today that Officer Wilson has an orbital blow out fracture of his eye socket. The Factor has not been able to confirm that, and we do not want to try this case on television.

Sure, O'Reilly hasn't been able to confirm this, but why should that stop him from telling you Some Say it is true? Ya know, Bill, we also read that report from Jim Hoft, the stupidest man on the internet:

The Gateway Pundit can now confirm from two local St. Louis sources that police Officer Darren Wilson suffered facial fractures during his confrontation with deceased 18 year-old Michael Brown. Officer Wilson clearly feared for his life during the incident that led to the shooting death of Brown.

Of course, we also followed up on the "sources" reporting Officer Warren's version of events, according to "Josie," who is supposedly a friend of Mrs. Officer Warren, and, funny thing, we included the minor detail that the Post-Disptach reporter who supposedly had the inside info later admitted that her story did not meet her publication's standards, so never mind. But still, it would be irresponsible not to speculate, as O'Reilly knows because he is a Journalist.

In conclusion, we are all very grateful that Bill O'Reilly took a vacation from his vacation -- just like President Obama! -- to bring us this factual accounting of how nobody in the media except for Bill O'Reilly has the testicular fortitude to report rumors he has read on the internet about what REALLY happened. And we would like to congratulate him for hitting all the important points: stupid liberal media is stupid because it won't even report that Jim Hoft said a thing; Michael Brown was probably a thug who was begging to be shot IN HIS MIND; up until Officer Wilson killed an unarmed teen, he'd never done that before, so really, isn't the first one free?; and also race hustler Al Sharpton is trying to inject race into a story that has nothing to do with race because he is also the real racist.

Thanks, Bill, please go back to the vacation you so richly deserve. We'll have your Peabody ready for you when you get back.