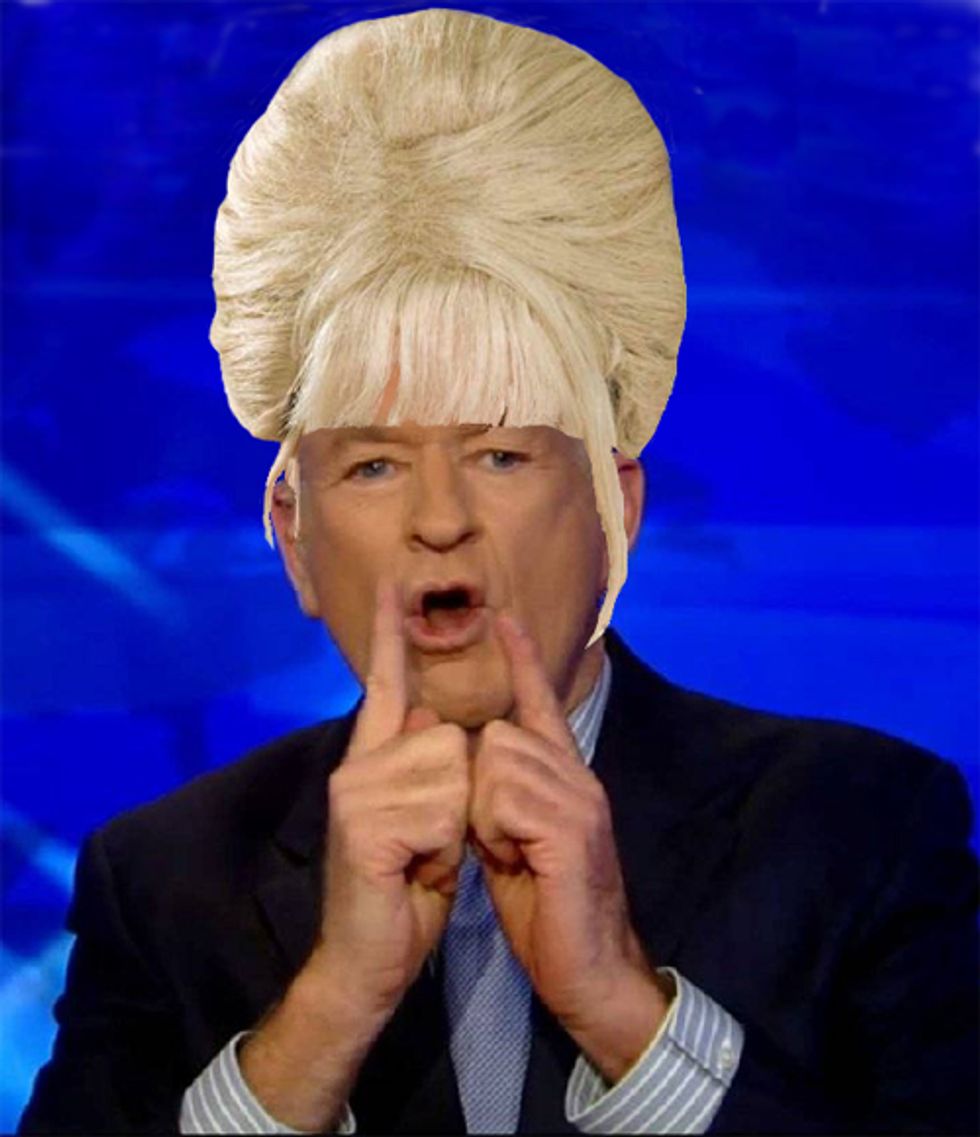 If you've been obsessed like we have with the utterly riveting debate over the Trans-Pacific Partnership, you are aware that there is a bit of a meta-flap about how commie gay Kenyan usurper Barack Obama can add "lady-hater" to his list of adjectives, because he called your favorite Sen. Elizabeth Warren by her first name in an interview. The exact quote: "The truth of the matter is that Elizabeth is, you know, a politician like everybody else." You might be saying, "But Elizabeth is her name and they are grown-ups, and the president calls girls and boys by their first names, WHAT?" But that didn't stop Ohio Democrat Sen. Sherrod Brown from saying Obama is a big old sexist, because he never would have said "Sherrod, you are A Idiot," he would have said "Mighty penis-having Senator Brown, you are A Idiot." (Even though yes he would -- and has.)

So now that everybody knows how much Obummer hates ladies, Bill O'Reilly, that great feminist, has stood up to defend him, on his television programme:

"Is President Obama a sexist guy??? ... The president is trying to get a free trade agreement passed, but Miss Warren opposes. ... Upon hearing [Obama's comments], the National Organization for Women slammed down the hammer. BANG!"

O'Reilly knows about ladies like "Miss Warren" and NOW slamming down hammers and going "BANG!" He also knows that this is just like how it's going to be, when people start making actual sexist comments about Hillary Clinton, and the "grievance industry" gets all mad, and then those poor Republicans will have to be constantly apologizing, just like poor penis-owner Barack Obama:

"Of course, this whole thing is insane. It's a political disagreement. There's no sexism involved. But the White House, which is sympathetic to the Grievance Industry generally, now has to deal with it. ... This is a preview of what we are going to see int he presidential campaign. The militant feminists and their enablers are firmly in Hillary Clinton's camp. SO! If Mrs. Clinton is criticized, the sexism deal will be all over the place! ... The irony is President Obama is a former uber-liberal champion, now he's a bad guy, an oppresser!!!"

Bill O'Reilly would like everybody to stop saying things are sexist, because he plans to be mighty sexist, toward Hillary Clinton, during the 2016 campaign. That is why he is defending President Obama right now. Because strangely enough, Bill O'Reilly is known for being really freakin' sexist! Like this time, when he was bemoaning how all the little frou-frou ladies have such an emotional attachment to the Democratic Party; or this time, when he talked about just how silly and dumb even the Republican ladies are; or this time, when he was talking about what a big dumb girl Michelle Obama is. He has a bit of a track record.

Anyhow, Barack Obama is innocent, because Bill O'Reilly knows sexism when he sees it (in the mirror), and what Barack Obama said was not sexist, QED.