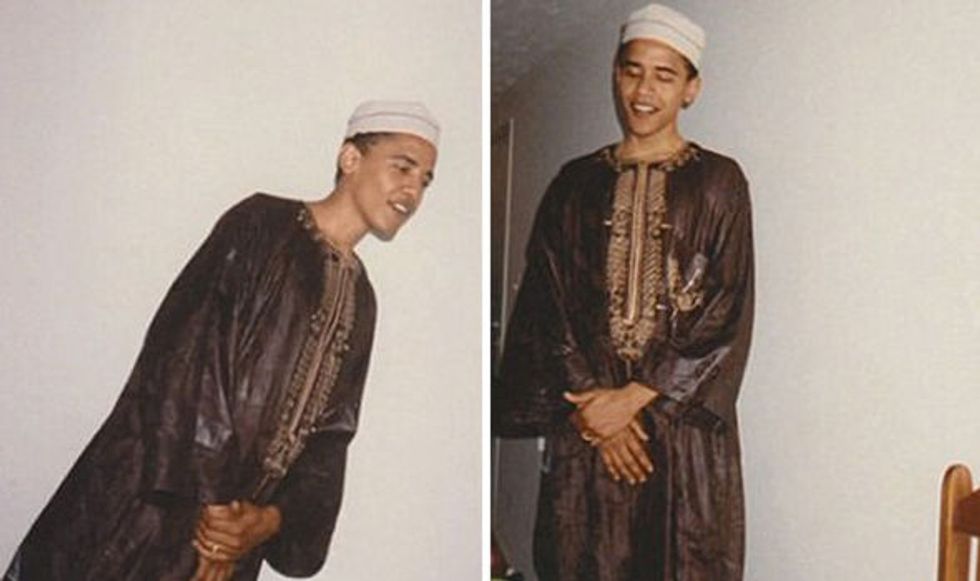 Well, it has finally happened! Bill O'Reilly has finally discovered incontrovertible proof that President Obama loooooooves "Radical Islamic Terrorism" so much, and thinks it is the best thing ever.

It is a picture of Barack HUSSEIN Obama at his half-brother's wedding. His half-brother who is, in fact, A MUSLIM. Not only that, but when he attended this wedding/ISIS recruiting party several decades ago, he wore a MUSLIM OUTFIT. Can you believe??

These photos, O'Reilly says, explain why President Obama has not stopped ISIS, even though he could have done that easily like, eight years ago simply by saying "Muslims are bad! Radical Islamic Terrorism!" three times in a mirror and then twirling around four times and spitting on a cartoon rendering of Mohammed. But no, he just let lots and lots of people die, because he is a cruel and evil person who enjoys the taking of innocent lives.

While O'Reilly says he DOES NOT think that Barack Hussein Obama is a Secret Muslin, he says that these pictures prove that he is definitely not a "Devout Christian." Because there is literally no way that anyone would attend the marriage ceremony of anyone of a different faith than they are. He also points out that one time President Obama said something about an Islamic prayer at sunrise being beautiful as more evidence that he has "emotional ties" to Islam. Which should be news to everyone who isn't a Catholic but who has attended Catholic weddings and thinks a lot of Catholic Churches are beautiful from an architectural standpoint.

And speaking of Catholicism! O'Reilly favorably compares his own criticism of sexual abuse in the Catholic Church to Obama's supposed non-criticism of Islam! Saying that he went after the Catholic Church VERY HARD for the sex abuse cover-ups, and that he, too, was separating the actual faith from those who abused that faith. That is what he says Obama needs to do. Be more like him! Say more things like that!

O'Reilly may be shocked to know that President Obama has actually done this before! Many times! In fact, one of those times was at last year's National Prayer Breakfast, where he said "We are summoned to push back against those who would distort our religion -- any religion -- for their nihilistic ends" -- and was summarily accused by conservative media of suggesting that Islam was the official religion of the United States.

He then said this!

But we also see faith being twisted and distorted, used as a wedge -- or, worse, sometimes used as a weapon. From a school in Pakistan to the streets of Paris, we have seen violence and terror perpetrated by those who profess to stand up for faith, their faith, professed to stand up for Islam, but, in fact, are betraying it. We see ISIL, a brutal, vicious death cult that, in the name of religion, carries out unspeakable acts of barbarism -- terrorizing religious minorities like the Yezidis, subjecting women to rape as a weapon of war, and claiming the mantle of religious authority for such actions.

We see sectarian war in Syria, the murder of Muslims and Christians in Nigeria, religious war in the Central African Republic, a rising tide of anti-Semitism and hate crimes in Europe, so often perpetrated in the name of religion.

So how do we, as people of faith, reconcile these realities -- the profound good, the strength, the tenacity, the compassion and love that can flow from all of our faiths, operating alongside those who seek to hijack religious for their own murderous ends?

Which sounds pretty much exactly like what Bill O'Reilly was accusing him of needing to apologize for not saying, and suggesting he was incapable of saying due to his strong emotional ties to Islam. Weird! But whatever, one time he wore an outfit at a wedding, so it probably doesn't count.