Bill O'Reilly Reminds Us That He's 'Not Yoko Ono' 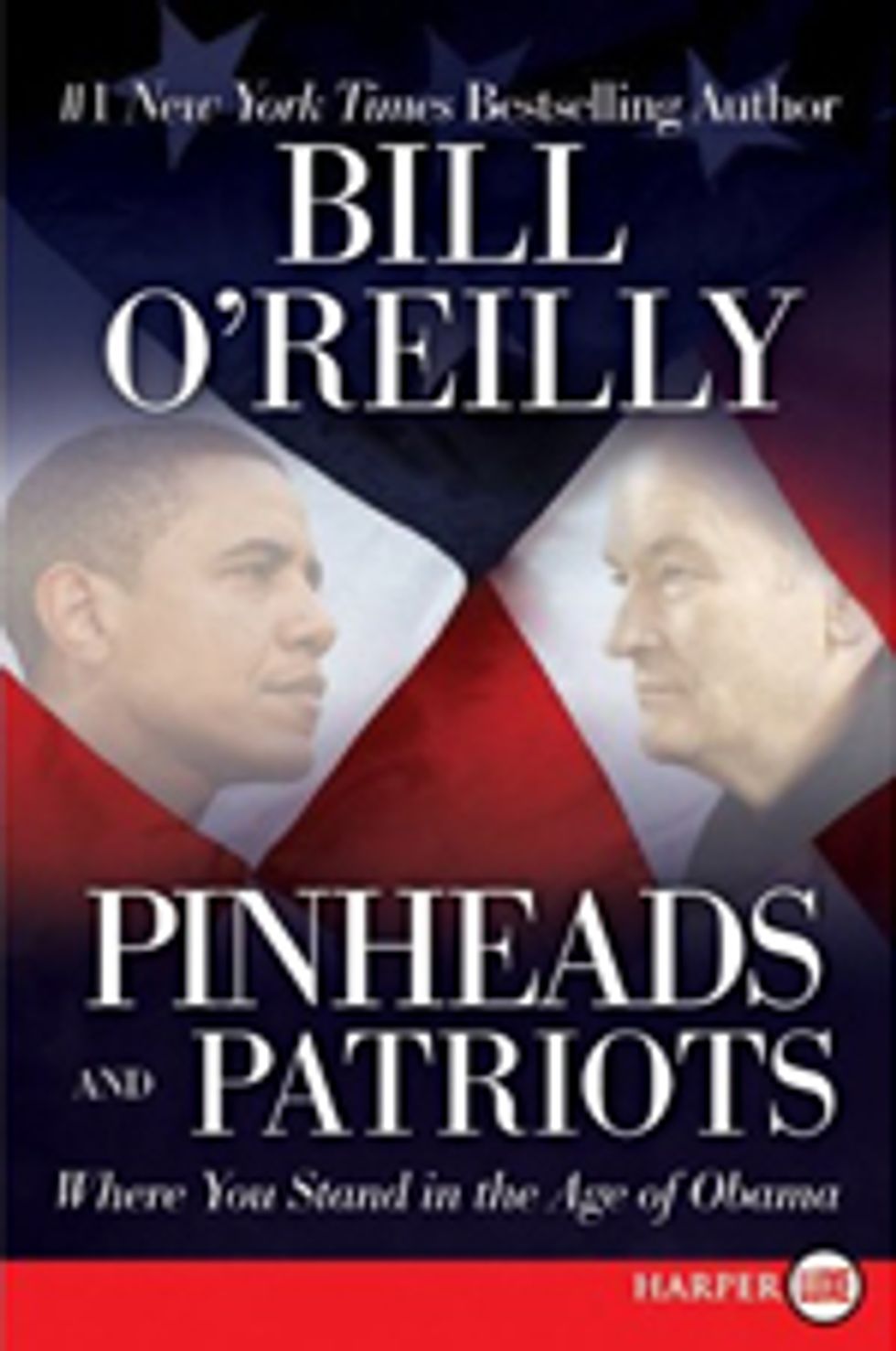 Frenzied teevee oaf Bill O'Reilly (of the beloved family sitcom The O'Reilly Factor) had a brainwave one day, possibly while overhearing his Lincoln Town Car chauffeur listening to the Ramones: Why not divide humanity  into "Pinheads" and "Patriots?" Bill O'Reilly is a lot like Jesus, you see, who came to divide people into "patriots and goats," or something like that. Apparently this idea impressed Bill's agent and publisher when they were having their bi-monthly “throw the Squishy Ball of Creativity around” meeting. And that's how America's newest Must-Read Book, Pinheads and Patriots, came into the world. How good is it?

O'Reilly projects a lot of confidence onscreen (though one wonders if bluster = confidence or if bluster = something else about which your reviewer dares not speculate) but watching him, one gets the sense that these days he spends a lot of time weeping bitterly into his Haagen-Dazs. Why so?

Because Bill O'Reilly is the Jonas Brothers to Glenn Beck's Justin Bieber. He was there when FOX News began its conquest of America, and he was a huge part of its success, but in late 2010 his cartoonish "angry man is angry" routine can't match the outright foaming hysteria and Muslims-in-my-dishwater paranoia you find elsewhere on the network. He's losing his edge to crazier kids.

Anyway, Pinheads and Patriots: Where You Stand in the Age of Obama.

You know what you begin to notice when you review lots of wingnut opuses? Most books written by the more marketable wingnuts carry some variation of a "#1 New York Times Bestseller List author!" blurb on their front covers. All of these folks hate the New York Times, of course, and FOX News directly presents itself as an alternative to its wicked "liberalism," so why does every somewhat popular wingnut author plaster his or her success on the NYT's dumb bestseller list across their book covers like lipstick on a well-loofahed streetwalker?

The book itself is so standard-issue O'Reilly (which, behind the rage-clownishness, is Really Boring) that block-quotes would be pointless. It might be more useful to take various sentence-fragments from this thing and generate a weird collage-poem, in the manner of the Dadaists or, in a different way, T.S. Eliot or even what's his name, America's Greatest Fascist.

HEY YOU! YOU, THE AMERICAN!

Many will hurt you.

My comfort zone...sporting activity, not bongs or acid.

...my sister and I were held captive.

I must say the party was ‘smashing,’ to use a term I picked up while living in London.

I don’t personally find him cold or unfeeling...

very impressed with Michelle Obama, who commands the room with her physical presence and was as welcoming as a person could be.

Is it possible to be a wise girl?

...opining that Mr. Obama is on a par with, say, Karl Marx, is foolish.

When I called home from El Salvador...

No longer is Bill O'Reilly sent to cover the Falkland Islands War.

Americans are losing the ability to think critically

The polls rated the 1980s the best modern decade.

...bright, shining city on a hill.

There it is, Bill O'Reilly's intriguing worldview distilled into poetry. He should just yell this every night on his Factor teevee show, while the "body language expert" does an interpretative dance and Dennis Miller looks on with a knowing "getta load of THIS guy!" smirk on his face. Then, and only then, will Bill O'Reilly be able to compete with the younger, fresher cable-teevee screech-monsters.

Pinheads and Patriots: Where You Stand in the Age of Obama by Bill O'Reilly, William Morrow (division of Harper Collins), 272 pages, $14.98

*FOOTNOTE: Your reviewer hates to be a geographic pedant, but the UK's American embassy isn't in Berkeley Square (where O'Reilly says it is, because he was "there" during the epic 1968 anti-Vietnam War protest). Where is it? People who've at one time or another lived in London for longer than O'Reilly "lived" there might know the answer! Maybe Bill was thinking of that old romantic tune, A Nightingale Sang in Berkeley Square, which is what he sings when he's hammily flirting with Gretchen Carlson.

AT ANY RATE, e-mail book review ideas to greer.mansfield@gmail.com. Thanks to Wonkette operative "J." for recommending this particular horror.